Just signed up for a month’s free trial of Amazon’s “Prime” membership program. Why not? A month of free shipping at Christmastime: hard to resist!

Do you think Amazon Prime is worth the annual membership fee of around $80 over the long haul? Hereabouts, sales taxes are now 9.7% and probably rising. With free shipping plus prices that often beat brick-and-mortar retailers, a savings of almost 10% on each purchase is significant.

Or is it? To break even on that $80 purchase, you’d have to buy almost $850 worth of goods every year. How many people have $850 worth of stuff shipped to their house?

Seems to me there are three hidden costs with Amazon Prime:

2. the severe temptation to pounce on every “bargain” that comes along, leading you to buy a lot of junk you don’t need; and

3. the enormous harm done to local merchants by just such massive mega-retailers as Amazon.

For many of us, the third isn’t very operative. The Phoenix area, which has cloned Los Angeles’s sprawl and embraced every soulless scheme of Big Business that ever came down the pike, is hardly what you’d call heavy on local merchants. I buy most of my groceries at Costco and Safeway. The few farmer’s markets feature more craft vendors than produce and meat growers, and they take place at inconvenient times, in inconvenient locales.  My clothing comes from Costco or the only two chains that carry outfits that aren’t too ugly on an old lady, and my electronics by and large come from Apple or the roundly hated Fry’s. No one who lives here has many choices: the malls host nothing but chain stores, and local enterprises are few and very far between. Amazon is not about to make me quit shopping at only local merchant I frequent, AJ’s.

But if you lived in a real city or in a small town with character, it could pose a problem.

The second, junkomania…well. That’s another matter. 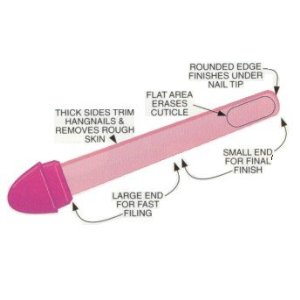 I want this thing

this thing, for example. Oboy do I want to try one of those! It’s called a “Ruby Stone,” and women all over the Web rave about it. Came across it on another site where a bunch of manicurists and their customers were doing some sort of dance to spring over it and decided it’s THE substitute for expensive pink emery boards whose sandpaper wears right off by the third use. I have a couple of glass nail files which work well and don’t wear out readily. But these women say the Ruby Stone is even better. It only costs $1.84, meaning that the cost of shipping, if you’re paying it, would about quadruple the price. So: free shipping? Junk acquisition!

But for just a dollar eighty-four…who could resist?

Because Amazon plies you with “Today’s Deals” (OMG!! A large Moleskine ruled notebook

But…do you want to? do you need to? 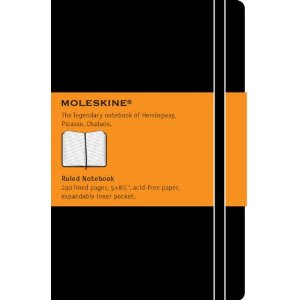