“Under weigh” is actually the correct phrase, a nautical term. But let’s go with the flow. The tidal flow, of course.

Old-timers here will recall that a year ago I had the bright idea of digging the sand and weeds out from between the flagstones in my front courtyard and filling in the spaces with river rock. It’s worked pretty well: minimal weed intrusion, and the overall effect is reasonably pleasant.

Until last spring, the favored weed has been burr clover. This particular weed has not been unwelcome between the flags, because it makes a pretty little yellow flower and it does not, despite its name, make burrs.

Sweet little plant, isn’t it? In the past I’ve let it grow. It makes a nice mat similar to dichondra, and it costs nothing: it seems to materialize out of the air.

Last spring, though, a hideous invader took root between the back patio’s flagstones. Whereas it is true that I know almost everything, one of the very few things I don’t know is what the hell this little monster is. I don’t recognize it as a native desert plant (and I know most native desert plants). I don’t remember it among the many weeds that have grown in the several lawns I have been stupid enough to dump water on (but anything’s possible). I can’t find it among my favorite lists of invasive and annoying newcomers to the Sonoran Desert. The only thing I can think is that this thing blew in on the winds of globalization. 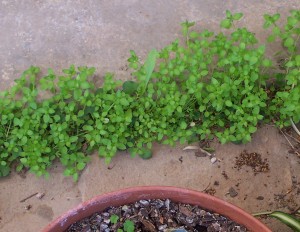 When it first appeared last spring, I thought, “Well, OK… It looks like something that will make flowers, so let’s leave it there.”

Wrong. It does not make flowers. And while it’s inoffensive enough when it’s young, as it ages it grows rangy, wiry, and uglier than pussley.

And it ain’t easy to pull out.

It crowds out the expensively installed dichondra I planted late last spring. Amazingly, it crowds out burr clover, an aggressive and resilient weed. When the heat comes up, what you have is an ugly tangle of wiry, tough gunk.

I pulled it out last summer and this spring found twice as much of it growing than I saw last year.

So I decided (once again!!) to dig out the weeds and dirt between the flags, only this time instead of trying to get something I want to grow there, to replace the stuff with stones, much like the front courtyard’s stoneware.

Consequently I’ve been scrounging free stones from the alleys again. Here’s the result, so far: 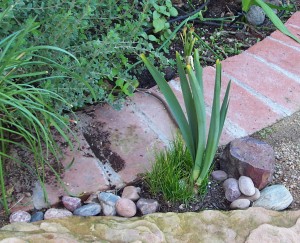 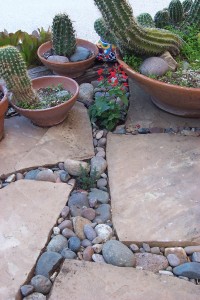 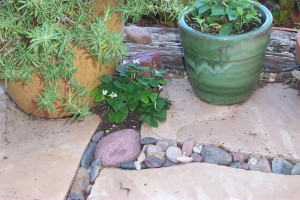 It’s working out. Only a few more crevices left to fill—maybe two or three runs up alleys with the pooch covering for me (oh, dear Manny, Nosiest of All Possible Neighbors: just wringing out the dog behind your house :-D). Unexpected benefit: no more ankle-turning trips on the flags. The dirt has settled so much since Satan installed the patio that if I’m not careful to set my feet firmly on a flagstone, half my foot will slip into a crack and I’ll wrench my already strained ankle once again. With the stones carefully set so they’re level with the surfaces of the flags, I can walk across the surface without risk of additional pain.

I hope this landscaping scheme is not altogether hideous. Frankly, I think it’s better than the weeds. But for sure, one man’s weeds are another’s Eden.

Burr clover image: Shamelessly ripped off from UC Berkeley, but probably in the public domain, UC being a state institution