Down and out in Tokyo

It happened three times yesterday: signs of senility. Not one, not two, but three really serious things that stir up my absolute worst, most terrifying fears—financial and otherwise.

First, I learned I failed to pay the Cox bill last month. So convinced was I that I must have paid it that I shot off an inquiry to the credit union asking if there was some way a Billpay transaction could have gone astray. I’d entered the transaction in my Excel spreadsheet and neatly stored the statement in the “Utilities” folder. But apparently that was as far as it went: evidently I never went into Billpay and paid the bill.

My vision is getting worse, so that I can’t read a computer screen through the progressives. When I have those on, to read a computer monitor I have to take the glasses off and stick my face up close to the screen. I’d taken them off a couple of times to read students’ work, and I’d taken them off at the instructor’s terminal. When I went to put them back on, they were gone.

Searched all over the desk, the floor, the chair…nothing. Searched the desks where I’d been helping students. Nothing. Pretty quick twenty students were searching the classroom. Finally I found them: inside the large, bulky binder that serves as my mobile office, sandwiched between pages. I’d already looked through the thing twice and missed seeing them.

The problem is, without a pair of glasses on, I can’t see a desk or counter clearly enough to spot a pair of lost glasses. So if I don’t put them down in the same place every single time they go off my face, I have a dickens of a time finding them.

They’re somewhere in the house, the car, or the yard. But I can not find them. And this time I do have another pair of glasses on so that I most certainly can see the surfaces around me.

I searched for hours last night. I searched until 12:30 a.m. This morning by light of day, I searched again. They’re fucking GONE.

M’hijito likes to say, patronizingly, that things like this are not “lost”; they’re “misplaced.” Well, as far as I’m concerned, an item so “misplaced” that I can’t find it and so can’t use it when I need it is lost!

He’s going to come over sometime this week and help to toss the house, searching for the damn things. Meanwhile I’ll have to tip over the recycling bin and the kitchen garbage, dump all that stuff on the pavement, and paw through it. Fortunately, I have an old pair of distance vision glasses. But those progressives, besides being wildly expensive, are the best pair of glasses I’ve ever had—the only pair that make it possible for me to sort of see up close and also see in the distance, without tripping over curbs and thresholds when I try to walk around. I certainly can’t afford to replace them…the cost was staggering. So, unless they surface, I’m flat outta luck.

And what will happen if I have a stroke? A heart attack? Some accident that keeps me from doing the piddly amount of work I’m doing now to keep myself going?

More than bag lady syndrome, it scares me. More than that ungodly upside-down mortgage that’s going to start sucking up my retirement savings when I can’t earn enough to cover my part of the payments, it scares me. Even more than the unholy right-wing extremists who’re trying to take over the country, it scares me!

We all have our financial terrors, I expect. What specifically they are probably depends on our time of life.

When you’re a young thing, you fear you’ll never earn more than the median wage (if that) in some low-income right-to-work state. When you get established in a career, you worry that something will happen to put you out of a job. Or you run up a ton of debt and imagine a line of bill collectors forming outside the front door. Then you have kids and you wonder how you’re ever going to support them, or what will happen if you die before they reach adulthood. They grow up, they’re out the door, and you realize you’ve only got a few years to go until retirement, the house isn’t paid for, and you don’t have enough in savings to support you through your dotage. Then you reach your dotage, and heaven help you, you start losing your glasses…to say nothing of your marbles.

Is there a PF bogeyman hiding in your closet, waiting to pop out and haunt you at 4 in the morning? What does it look like? 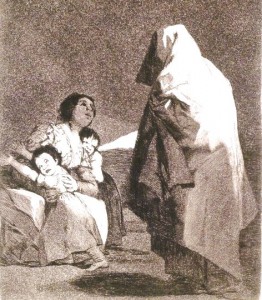 Homeless man, Tokyo. MichaelMaggs. Creative Commons Attribution-Share Alike 3.0 Unported license.
Here Comes the Bogey-Man (Que viene el Coco). Francisco de Goya. This image was uploaded to Wikipedia as a donation by the Brooklyn Museum, and is considered to have no known copyright restrictions by the institutions of the Brooklyn Museum.