Here’s the question: Is it better to mound up your spending money in one big pile, or does it make more sense to divide it into “piggybanks” dedicated to one purpose or another? Is it an overcomplication to dedicate x or y amount to, say, groceries or eating out? Wouldn’t it be simpler to give yourself a set amount of money to spend for a given period, and not obsess over how it’s spent?

In the envelope system, for example, you convert your month’s income to cash and literally stuff chunks of it into various paper envelopes—this much for groceries, this much for gasoline, this much for entertainment, and the like. When you run out of cash in a given envelope, you quit spending on that category until you get another paycheck.

Many of us do this in a virtual environment. A program like Excel makes it easy. I certainly do: my discretionary budget allocates specific amounts to various categories such as groceries, gasoline, etc.

The greyed-out figures are charges and returns that have been posted in the “Left from $500” column.

The nondiscretionary budget does the same, only in a different format because I have little choice over how much will be spent: 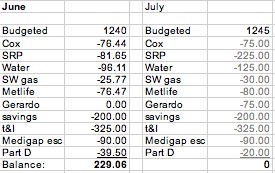 In this case, the greyed-out figures represent bills that have yet to arrive. The $130 I’ll have to spend this morning on getting the hated palm trees trimmed will come out of last month’s black ink. Next month there won’t be any residual black ink: power and water probably will exceed the budget. But that’s neither here nor there. The issue is…

Discretionary budget? Nondiscretionary budget? The first contains 11 items. The second contains 10. That’s 21 items I’m tracking in two subbudgets. But in any given month, a specific amount of cash is available for spending—in the summertime it’s $1,745. Does it really matter where the money is spent, as long as no more than $1,745 goes out the door?

Sometimes I think the business of tracking ever penny that’s spent on this or that category is just obsessive. Personally, I worry that if I don’t keep a grip on expenditures, at the end of the month there won’t be enough to buy groceries or pay the utility bills.

But maybe that’s wrong. Maybe it would be simpler (and saner?) to regard the $1,745 as one big pile of dough from which little bread loaves are baked when needed. If instead you planned that all extraordinary expenses—anything other than recurring bills and bare subsistence—would be covered by savings and then stopped worrying about what you spent in any given category, would you be at any more risk of running out of money at the end of the month?

We know that last January J.D. over at Get Rich Slowly stopped tracking his spending altogether. The roof apparently hasn’t fallen in on him, because he’s still posting to his blog (unless he’s posting on his iPhone from debtor’s prison).* He compares the practice of tracking each transaction, which he had long advocated, to training wheels, and suggests that after habits of mindful spending become engrained, it’s no longer necessary to track every single penny.

I’m none too sure about that. In the first place, there  have been a few times when a transaction came into question, and it sure was handy to be able to search a year’s records and find it instantly. And on occasion, various store clerks, managers, and bureaucrats have been mightily surprised when I came forth with a three- or four-month-old receipt. And third, sometimes it’s useful and convenient to be able to see at a glance how much I’ve spent and how much is left.

My thought is nowhere near as daring as JD’s. Rather than quit tracking altogether, I suggest that there may be no real reason to detail budgeting and spending. Maybe just establishing a puddle of money and staying aware of what you’ve spent overall, on everything, compared to the amount available, would suffice.

Is it enough for you simply to know you have $x,xxx this month to spend? Or do you want your budget organized into categories and subcategories?

* Update: As a matter of fact, more recently J.D. decided the better part of valor is keeping track of every penny, after all.