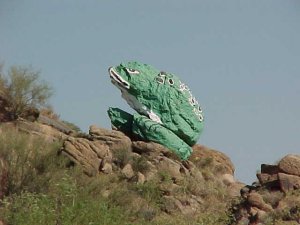 The Yarnell Frog at the base of Yarnell Hill, where the road begins its steep two-lane climb up the rim.

Yesterday my friend KJG and I decided to pile our dogs in the car and drive up to Yarnell, the quaint old mining town and wide spot in the road that I covet as a weekend getaway. Perched on the edge of the Mogollon Rim, it’s up out of the Valley’s heat, which at this time of year becomes oppressive with monsoon humidity.

Naturally, we picked the only day of the summer when it decided to rain in the morning. But that was fine: we welcome rain. It cuts the heat.

When we got up there, we went straight to the shady, peaceful Shrine of St. Joseph, retreat center with a religious diorama sculptured into the granite boulders at the top end of the town’s most picturesque road. This provided a place to park so we could stretch our legs and walk the dogs through the adjacent residential area. 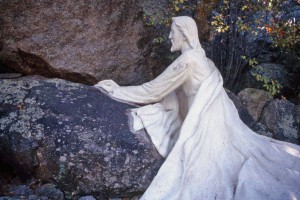 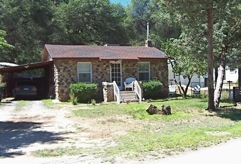 Interestingly, the house that I think is absolutely the prettiest little dwelling in town is for sale. Here it is in more halcyon times. Isn’t that the sweetest and best little stone cottage? Probably assembled and mortared, rock by rock, by some miner back in the late 1800s.

It’s abandoned and gone to seed now, but still standing. If I wanted it, it’s there for the asking. In today’s market, the bank or whoever owns it would probably give it away.

Before long we got rained on and had to run uphill to return to the car. Soaked to the skin, we started back down toward the main drag, passing the coveted cottage. A Salt River Project lineman was parked in front—we had waved at him as we were walking around and so stopped to say hello. A Wickenburg resident, he also coveted the little house as a weekend cabin.

I asked him what he thought of the electric service; he said it looked OK to him, probably safe. The panel was relatively new, he said, and the air conditioning system on the roof was new. He remarked that it was a gas pack.

“So that means the thing runs on propane?” said I.

“Hm,” said he. “Propane’s pretty expensive.” You can tell a native Arizonan by his gift for understatement.

The cottage has only two bedrooms; one of them, KJG noted, is about large enough to accommodate a camper’s cot. I suppose a single person could convert it to a walk-in closet, though.

The big problem with the house, though—other than the fact that it is a house, a white elephant to be renovated, maintained, cleaned, and gardened—is a large structural crack running from the roofline down to the ground. Whoever installed electric service (no doubt as a retrofit) cut a small nook into the stonework near an opening to the low crawl space beneath the structure, evidently to accommodate an outdoor electrical outlet. Though they spanned the opening with a short steel lintel, evidently this did not suffice to bear the weight above it.

So whoever buys the little house will purchase not only a great deal of charm but an expensive repair job. Assuming a repair can be made at all.

Moving on, we dried out over hot coffee (surprisingly good!) and home-made sweets at the Cornerstone Bakery, a favorite of locals up on the main drag. Residents like to pass the time in the charmingly decorated old shop, where everyone knows the proprietors and the proprietors know everyone.  I had a peach strudel wrapped in what tasted like real puff pastry and KJG said her cinnamon roll was the best she’d ever tasted.

Strung mid-town along route 89A are clusters of antique shops, galleries, and gift stores. I happened to know that the next-door Yarnell Emporium carries some interesting hand-designed T-shirts, among many other things. Although my clothes were no longer soaked thr0ugh, I craved a dry shirt and so steered us in that direction. On the way, though, we were waylaid by Behind the Door, a sweet little consignment gallery occupying an old house. Proprietor Carrie Brandenburg carries everything from original oils, acrylics, and watercolors to hippy-dippy bead jewelry of the kind I make myself. 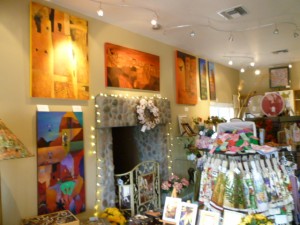 There are some pretty interesting pieces in this store, among them a clever found-art sculpture, a lamp (of sorts) fashioned from old bicycle handlebars. Being the sort with a taste for the near-representational, I enjoyed the only slightly abstract  pictured images here, of pueblos and more recent Southwestern architecture. Click on the photo for a larger view.

We weren’t in the market for big-ticket items, though—or even for mid-ticket items. However, there was no chance either of us could get out of there without at least one of the attractively priced artsy-craftsy jewelry pieces. I picked up these; I couldn’t have made them myself for the amount the crafter asked, and they’re ideal for casual everyday wear. 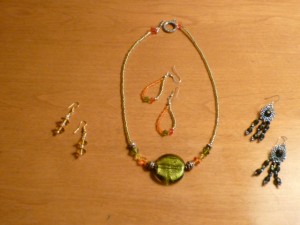 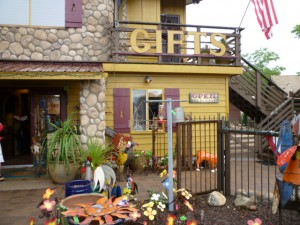 KJG was in the market for yard art a cut or two or three above the painted plaster campesino slumbering beneath his umbrella in the shade of a saguaro. So she was delighted when we made our way to Yarnell Emporium, which among many other things specializes in some very entertaining and often charming outdoor decor. Just now owner Ed Williams is carrying a lot of metal designs.

I coveted the sunflowers: 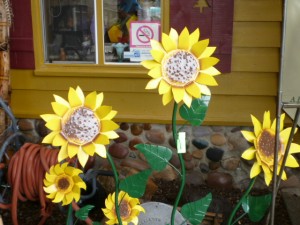 KJG, having raised goats at one point in her misspent youth, was drawn to this little guy: 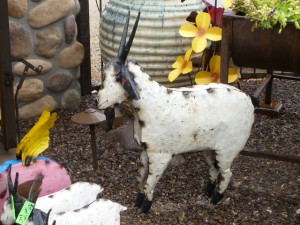 Frugality being the better part of valor, he’s not peeking out from under the shrubbery in her yard this morning. Alas. Inside the shop we spotted a monumental cast bell hung in a circular frame, very Asian in appearance. That was more like what she had in mind. At $500+, the price was pretty good compared to what you’d pay for it in a design shop or at an artist’s foundry in the city. She took it under advisement and is considering how it might fit in her and DH’s carefully landscaped backyard.

We hit it off with the sales rep, who had no one else to socialize with. Kathleen proved to be a discreet but effective shopper’s assistant. Before long we’d stocked up on hats, shirts, skirts…oh my! KJG found a wide-brimmed hat that looked terrific on her; so taken by it was she that she bought another one for her mother. The shop has a nice collection of broomstick skirts, a fashion long out of date but one that I happen to yearn for because it nicely disguises certain unstylish curves on my body. Fabric colors, which appear to be custom-dyed, are too gorgeous: 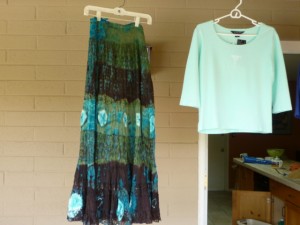 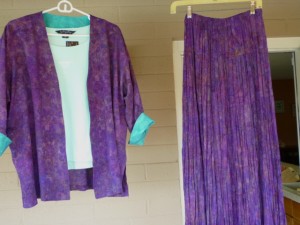 The little jacket on the right has turquoise-lined plackets that, when you have it on, open out like a shawl. The effect is surprisingly elegant—it’ll be perfect for church as well as for teaching this winter. Got the whole outfit for 30 percent off.

In the course of chatting, Kathleen unveiled a small revelation: the Emporium’s proprietor, Ed Williams, renovated an upstairs apartment and is renting it to the tourists.

Since no other customers were braving the rain, she kindly gave us a tour. What we found was an amazing little gem, a beautifully decorated one-bedroom apartment hidden away on the second floor of the rustic store Ed has built on the ground floor. It has, among other things, a luxuriant leather sofa, a beautifully decorated bedroom, and a full kitchen with brand-new, top-of-the-line appliances. Rustic, this is not. And one of the things you should know about Yarnell: it occupies one of the most spectacular venues you can imagine. Step out on the apartment’s balcony, and you have a view of mountains and wide-open spaces in all directions.

Apparently he only wants about $70 night for this place.

Well. Hallelujah sisters and brothers! I might be able to afford that, especially if the Landlord will allow me to bring Cassie the Corgi. May not manage it during this financially nightmarish summer, but I certainly could do it after classes start. And if my scheme for next summer works, I probably could go up there a couple of times a month.

You could rent a lot of $70 rooms for what it would cost to buy that stone cottage in Yarnell.

We learned something else from the locals: The ranch my ex- and I used to own with a bunch of his law partners is now being operated as a bed and breakfast. Nothing would do, of course, but what we had to drive up there and see what was what. That exploration led to an interesting adventure, which I’ll soon tell you about in a new Entrpreneurs post.