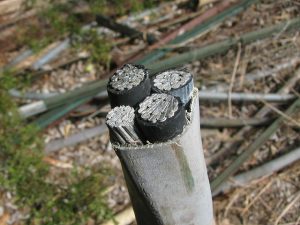 So as the sun made its way toward the zenith, things were going along OK, in a dopey sort of way. I spent most of yesterday morning loafing. Along about mid-morning, the ker-BLAM of an explosion rings out.

WonderAccountant says it was at 11:30. I’m so preoccupied with doing nothing (it’s hard work, you know, loafing is…) that I don’t take note of the time. Whatever it is, it’s loud and it sounds close. I get up, go outside, check up and down the street. Neighbor across the road comes out, too. I walk up the alley — she’s on the other side of the street from the alley’s entry — and check the garbage bin, because it sounded like a big firecracker going off inside a container. Nothing: by then the trash had been collected, none of us had tossed out anything new, and there was no sign of any fireworks inside there.

I go on about my business of loafing. Along about mid-afternoon, I need to get online to dork with my upcoming appointment at the Mayo. This is when I realize that all is not well. Long story short: my big iMac (about $3,000 worth) has gone down, apparently the modem is down, and none of the fake landlines in the house will work. And since the MacBook (laptop) parasitizes the iMac in a weird way, the little computer is also offline. So now, thanks to dear Cox disconnecting all the copper phone cables, I have no phone, no cable, no computer connectivity. Because the SIM card for the new iPhone hasn’t arrived yet, I can’t even use that gadget to make a call.

Eventually I realize that if I don’t change the details of that Mayo appointment, I’m going to have a fine mess on my hands. Plus now I need to call Cox again and rattle the corporate cage, and once again thanks to the wonders of modern technology I have no functioning phone. And the  iMac is dead, dead, DEAD! It’s SO dead I conclude that it’s permanently crashed. I can’t get it to come back on. And the iMac drives both the MacBook’s connectivity and the effing fake telephones.

So I go over to WonderAccountant”s  house to try to get online there. I don’t get far. I call the Mayo to fix the issue with the appointment. They put me on “hold” and run an endlessly repeating yakky message. Fifteen minutes later I hang up. Come back over here and again can’t get booted up.

Now I figure I should drive over to the Mayo’s hospital, which is closer than the clinic by a long shot, and see if I can find a human there who can reach their appointment staff. But first I decide to stop in at the Little Guy’s coffee house, a favorite place to get online. This works, but I still can’t get into the Mayo’s appointment thing in any usable way. But I figure maybe I can get through from my son’s house (especially with him there to help), so head down in his direction. As I’m cruising past the ’Hood on Main Drag East, a random thought belts me upside the head…

Uhm….ooohhkayyy…. Veer off MD East, dart through the neighborhood, fly into the house, race to the office, and…sure enough! The surge protector’s switch is OFF!!!!! Flip it on, and forthwith the iMac wheezes back to life!

In the 15 years or so that I’ve lived in this house, there have been lightning strikes and thunderstorms and blown power transformers and…never ONCE has that surge protector flipped over. Think o’ that. That must have been one helluva high-voltage blast.

2 thoughts on “A Day from Holy Hell…”