Okay, so the bee dude showed up yesterday noon. He looked at the composter and said the bees had taken up residence in there, and that normally in an object shaped like that, they’ll attach their hive to the top (as in the top of a cave). This meant, in his humble opinion, the bees had built a colony on the backside of the compost lid.

He felt the only thing to do was to exterminate them.

One of my quirks is that I hate, loathe, and despise insect sprays. Exterminators are not allowed near my house. Though I’ll use some boric acid and, in extreme cases, traps on ants or roaches, I don’t allow spraying. Instead, I keep attractions away from the living quarters and encourage insectivorous birds to visit frequently. And, except for the mosquitoes from the swamp behind Dave’s Used Car Lot, Marina, and Weed Arboretum, I never have any insect issues.

It took a while to reach that harmony. When I moved in to The House from Hell, Satan and Proserpine’s* pet ants had built an ant metropolis that I’m sure extended all the way down to Satan’s favorite throne in Hades. The place had roaches, too, although not in the gay profusion characteristic of other dwellings I’ve enjoyed. Oddly, there wasn’t a single black widow or scorpion to be found.

The place was barren: no trees except for two young willow acacias, a ridiculous sort of tree whose branches aren’t really strong enough to support the weight of a roosting bird or a bird nest. The one in back was planted directly upwind of the pool, so that summer monsoon gales blow bushels and bushels of Devil Pods (I call the thing the Devil Pod Tree, in honor of the previous homeowner) and stringy, pool-cleaner-clogging leaves directly into the water.

As soon as I got moved in, I planted four new trees in the backyard, buying the largest specimen trees my budget would tolerate. I also cultivated a number of bird-attractive shrubs. Although most birds will eat ants, what I really needed were thrashers, towhees, and woodpeckers, plus a nice tribe of geckos. A mockingbird or two would help, too. I put up two big bird feeders, knowing that insectivorous birds will usually come along for the ride if they see a lot of seed-eaters around. ThenI planted some roses and mulched them with a thick layer of bark chips, a substance much favored by small bug-eating lizards.Before long a pair of towhees took up residence. A woodpecker showed up and made short work ofthe cockroaches residing in the detestable palm trees. It took a year or two, but in time the birds and the geckos brought the ant situation under control—you hardly ever see an ant nest in the yard anymore,and when you do, it’s a normal, healthy ant colony, not a berserk ant empire. 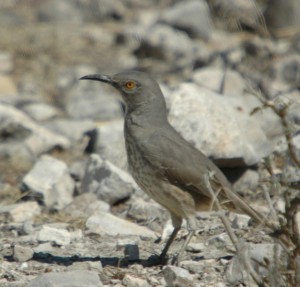 Applying insect spray in the backyard will disrupt that equilibrium, and before you know it, all sorts of problems will arise. No bees, no pollinated flowers. No pollinated flowers, no seeds. No seeds, no birds. No birds: ants, crickets, grasshoppers, and roaches coming out the wazoo!

It’s interesting that even a guy who cultivates bee colonies in his backyard assumes it’s normal for people to be afraid of insects. He very clearly thought I was and should be frightened of the bees foraging for pollen in the acacia tree.

What is it with that? What about something that’s an inch long should scare you? For crying out loud. Yeah, it’s true that some insects will bite you—most annoyingly, fleas and mosquitoes—and that some carry disease. But there are relatively easy ways to deal with that, not the least of which is getting rid of swamplike puddles on the bottom of drained swimming poools.

The term “killer bees” is an obscenity coined by the infotainment media, who sell papers on the “if it bleeds it leads” theory. Long before Africanized bees came along, plain old boring European-style honeybees were known to swarm humans, dogs, and horses, and working together they also can deliver fatal doses of venom. The difference is that the African strain of honeybee is a little crankier than the variety that evolved when the ice ages chilled Europe, cooling the temper of the bee along with the climate. Also, European bees are less likely than African bees to build their nests near the ground, where humans and pets can mess with them.

The bee dude seemed set on eliminating the bees not only from the composter beneath the willow acacia but also from the acacia itself. No amount of explaining that I like bees humming around the puffball blossoms festooning the willow acacia in back seemed to make him understand that I didn’t see a problem with the bees in the acacia, especially since he stated the foragers were not the builders of the hive.

If the new residents had settled into some out-of-the-way spot, I probably would have sent our boy on his way. But the fact is, they had occupied a device I use several times a week, located in a place where the dog and I both move around all the time. Being that they were no doubt Africanized, sooner or later we were going to piss them off.

Well, he said he’d apply a powdered pyrethrin to the composter and this would do in the hive. It also would do in a year’s worth of organic compost. Then he goes on about how the surviving bees will still be clustering around the hive area for three days to a week and I should be careful to keep the dog away from there and stay away from it myself, and so forth.

Unhappily, I agreed to this, since I figured a colony of potentially touchy bees near the ground in an area where the dog and I are likely to disturb them did pose a hazard.

So he went off to do his thing.

Pretty quick he shows up and informs me that he’s finished, and I’ll be pleased to know there was no hive inside the composter.

No. They were foraging for something in the composter.

That’s when I remembered I’d dropped some old toast that had a bit of honey in there. Sumbitch. Well, say I, then you didn’t have to kill them?

Oh, no, he said proudly, he had dumped pyrethin powder all over everything and all over the inside of the composter. They’re all dead.

Uhm…so my compost is ruined?

Oh yes. In a few days you’ll want to put on some gloves, get rid of the compost, and scour the composter inside and out first with detergent and then with bleach.

Well…uhm…if there was no hive inside there, why did you dump insecticide all over it?

Because, said he, he didn’t realize they hadn’t built a hive until after he’d already applied the stuff.

Well, this morning there’s not one bee anywhere near the acacia. You’ve heard of Silent Spring? In Arizona, fall is spring. What we have in my backyard is Silent Autumn. It’s dead quiet out there. And I use the word advisedly.

Sometime this weekend I will have to roll the compost barrel out to the alley. Being an old bat, I don’t have the physical strength to scour a thing like that inside and out, first with detergent and then with bleach. So I guess it’s done for, along with 40 pounds of beautifully ripened compost that I was about to use to build a new vegetable garden. I’ll just have to roll it into the alley and leave the whole arrangement for the trash pickup.

*Satan and Proserpine: the previous owners