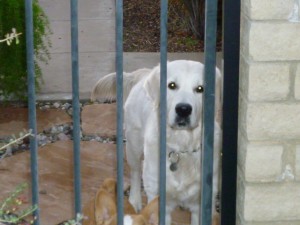 So we schlepped the dog to the vet at 40th St. and Thunderbird. The dog is crippled: he can barely stand up; he can walk a few steps and then collapses.

Vet did some tests and thinks the dog is probably not bleeding on the inside, but he can’t explain the crippled state. Show Low vet has diagnosed this as neurological damage from the 107.4-degree temperature. He speculated that the dog will never get over it.

Our vet now suggests we schlep the dog to a high-powered 24-hour veterinary center staffed with specialists up on Cave Creek Road. He arranges for us to arrive, and we start driving.

They do an ultrasound of Charley’s abdominal cavity and conclude that, contrary to fears, there’s no internal bleeding. At various veterinarians’ behest, we leave the dog overnight at the Cave Creek doggy hospital.

What has happened here is that when Ian opened the car door to let Charley stretch his legs in Show Low, Charley fell out of the car. At that point he could not walk. Ian thought that Charley couldn’t get up because something was terribly wrong.

And something was: a 107.4-degree temperature is terribly wrong, indeed. As in potentially lethal.

What if the dog’s temp was elevated, as we have speculated, because he worked himself up into a doggy tizzy because he hates, hates, HATES M’hijito’s new(ish) Ford Escape? The specialist vet at the fancy emergency hospital stated that this was quite possible: dogs have been known to die from elevated temperatures caused by the whim-whams and the terrors.

What if the dog simply tumbled out of the car because he was huddled up against the door in dismay (as he is said to have been) and when M’hijito opened the door he slipped and fell? In that case, he surely could have sprained (or broken) something in his back. Severe back pain plus several hours in a phobic state from riding in the car would absolutely explain the elevated temperature.

It also would explain why he gets incrementally better with each passing day. Hm.

The expensive vet did not see any damage to his spine, but I do not know if sonograms can detect fractures. What I do know is that people on Yelp comment on the breathtaking cost of this place — one person said they charged her twenty thousand dollars!!!

My son doesn’t have that kind of money: he’s already spent all of his emergency savings on this adventure.

Maybe I’m heartless…but I do hate to see him go into hock over a dog. Especially one that has about four years, maybe five, left in its life expectancy. Especially when in the back of my mind I suspect Charley would get better if simply left alone in familiar surroundings to rest and convalesce.

Granted, I’m not a nice lady. But I just don’t like the looks of this.