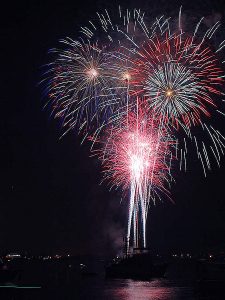 Happy Independence Day, one and all, whatever your particular political weirdness. Enjoy your freedom…such as it may be.

Here in the ’hood, the locals throw a great old-timey small-townsy July 4 parade. It’s grand. Did I go to it this morning? Not a chance…nothing will peel me away from my 7 a.m. coffee.

The Ruby and I were out the door shortly before 5 a.m. “As dawn cracks” is the best time to get out onto the streets for the daily two-mile stroll. Wait till 5:15 or, gawd forbid, until 5:30, and you’re elbowing aside every other dog-owner, dog-pisser, and dog-pooper in the city. Fly out the door just as the eastern horizon starts to gray out, and you have the place largely to yourself.

Except for my colleague, the other Old Bat in the hood who likes not to have to wrestle her dog away from the competition’s nuisance mutts. 😀 This is a fellow LOL (Little Old Lady) who is dragged around the hood by an ill-tempered shi-tzu. Whereas Ruby will (foolishly) try to love up every dog that walks past us, the shi-tzu will simply try to kill them all.

This old gal keeps herself in action, despite braces on her ankles and knees, by strolling about a mile every day around Upper and Lower Richistan. She lives in Lower Richistan, so this area is her territory. In chatting with her, I’ve learned that she is the living, breathing avatar of Aging in Place. Yes. She’s 93, she lives alone, she wrestles with whatever disability puts her in braces, and she does just fine. She’s an upbeat and happy human being.

Today I learned that one way she manages this is by having someone come in two days a week to help her out.

And how much does this cost?

Let us posit $80/day, the going rate for a cleaning lady in these parts. Oh, hell: let’s give them a raise for putting up with an old bat: $100 a day.

Not bad, I’d say. Even if you figure taxicab rides and food deliveries and the cost of one of those Save-My-Ass buttons… Ninety-three years old and she’s still goin’ strong.

This evening I’m going over to watch the public fireworks displays from the 12th-floor balcony of some friends’ condo. Looking forward to it: it’s a yearly Event. 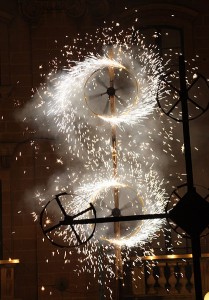 Last year I was afraid to go because of the neighbor’s alley weeds. Arizona has lifted all restrictions on fireworks, so we citizens can indulge ourselves in whatever suicidal idiocies we please. And since, as we know, at any time on the roads one in ten people around us is a moron, this is…problematic.

The city of Phoenix, faced with this new Freedom legislation, outlawed certain kinds of particularly dangerous, blow-your-hands off ordnance. The state, outraged by any such imposition on a Free Society, said okay, you can have that, but you cannot place any limit on any fireworks a retailer can sell.

This means that the local morons can buy any face-blasting hand-maiming kid-crippling fireworks they please; they just can’t legally set them off inside the city limits. Knowing this, the morons bring this crap into the alleys to set it off, figuring if a cop (or anyone else) catches them in the act, they can run off down the alley to escape capture. So you have all this garbage going off, ALL. NIGHT. LONG in the alley behind your bedrooms.

Ruby the Corgi, like most dogs, is terrorized by the sound of exploding fireworks. And of course if one of the morons sets fire to the mounds of cat’s-claw vines that insure my privacy along the back alley fence, the fire will jump to the roof (no, it’s not “if”: it happened already to another house in the neighborhood, which burned to the ground, leaving only a pile of ash on the concrete slab) — and my little dog will be incinerated.

But really. I do want to go to the party.

So I put up my son to watching the dog tonight. This evening I’ll drop her off at his place, fly down to my friends’ place, enjoy the company and the spectacle, and then pick her up on the way home.

How stupid is this?

Well. This is what we call Arizona.