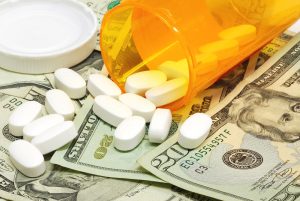 One of the reasons I haven’t been writing much at Funny about Money (or anywhere) is that I haven’t been feeling on the top shelf. Not sick. But not what you’d call creative. Just blah. This has been going on for awhile. I put it down to laziness. And to the heat: it’s in the 110s here now. Every day.

So I call out to my doc’s office at the Mayo, and the nurse says “you need to come right on in.”

Ohhhh….shit! Just what I wanna do: go to a doctor’s office in the middle of a contagion of a potentially fatal disease. But this stuff is scary, so I traipse out there. They order up an elaborate series of blood tests. Traipse to the hospital at the crack of dawn to get blood drawn. Then traipse way to hell and gone back out to the far side of Scottsdale to meet with the doc’s resident.

Who IS….this really neat and smart and wonderful woman. I want her as my doctor! Don’t let her get away!!!!!

Anyway: She says I have a vitamin B12 deficiency and also am pre-diabetic. Peripheral neuropathy — the grown-up term for tingling hands and feet — is a symptom, and it can get a whole lot worse. She and mega-doc agree I should start taking vitamin B12 supplements and come back in a month. Okay.

At the risk of repeating myself: Well….

Finding this stuff is easier said than done. I decide to try the Sprouts near my house, partly because the last time I went to the Walgreen’s near there, I was waylaid by a pair of aggressive panhandlers in the parking lot — to the point where I had to lock my car door and drive away! — and partly I figured if anyone had a vast selection of woo-woo “supplements,” it would be Sprouts.

But meanwhile and by sheer coincidence, I open up a medical newsletter — a piece of journalism — that I happen to subscribe to and find, lo! An article going on about how a recent study showed that  ingesting 500 mg of cinnamon thrice daily reduced glucose levels among a decent-sized group of test subjects. This peer-reviewed paper came out through Oxford, so it’s presumably reasonably sane.

Hm. So I decide to buy a bottle of 500-mg cinnamon tablets, too. 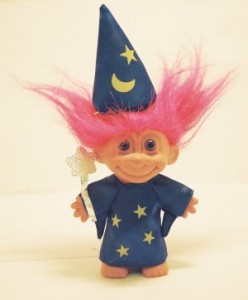 Easier said than done, indeed! No problem finding the B12 pills. But cinnamon is apparently High WooWoo. Not only are there a jillion variants, every one of them is ludicrously overpriced. Most of the B12 pills are rapaciously priced, too, but just as I’m about to walk away I find, down on a lower shelf, a brand selling the stuff for 7 bucks a bottle.

I figure ohhhhkayyy…I’ve got a big jar of cinnamon back at the Funny Farm: that can be sprinkled on apple slices, into spinach and chard, mixed with tea or coffee. A little math shows this should be easy: 500 mg is .1 teaspoon; three doses a day would be 1/3 of a teaspoon. But munching this stuff three times a day could get tiresome. I order a jar of 500 mg capsules from Amazon, which arrives within a day.

Problem is…well, there are two problems.

Turns out these are the products of two separate plant species. Saigon cinnamon is a cassia. Ceylon cinnamon is not. A little banging around reveals that the supposedly therapeutic variety is Saigon cinnamon, AND that it can have baleful side effects if you overdo it.

How baleful, you ask?

Uh huh. Apparently you have to ingest somewhat more of it than our researchers inflicted on their subjects for that to happen. But still…

2. The horse pills that arrive from Amazon are as big as the end of my thumb! NO WAY can I swallow one of these without choking on it. To use the things, I’ll have to cut the capsule in two and sprinkle it over food or into a drink.

We have this fine DIY comparison of the two varieties: 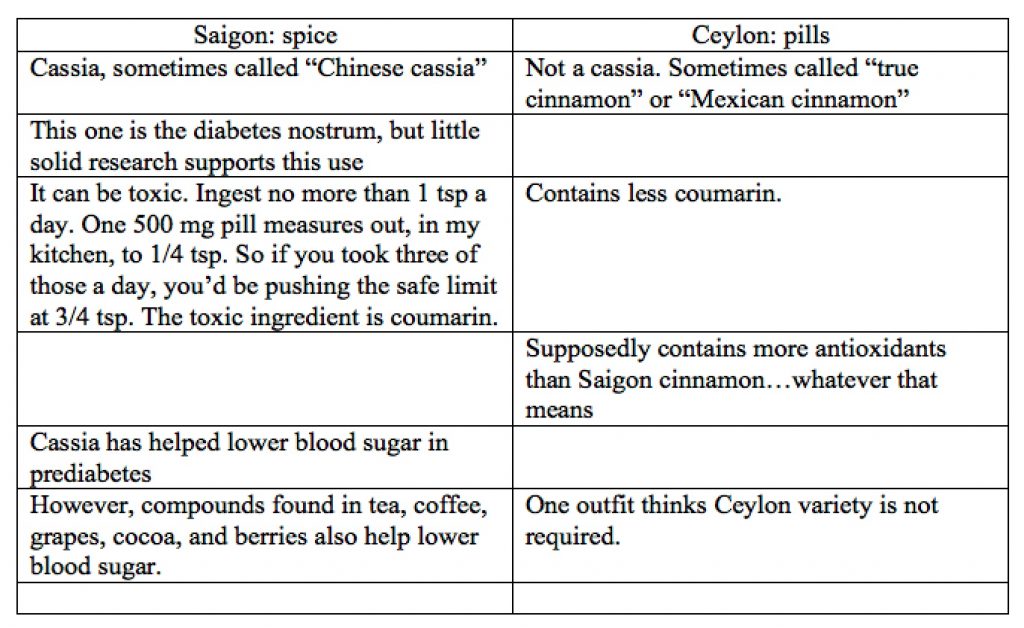 Hmmm…  Ohhkayy… It looks like it can’t do much harm to ingest Saigon cinnamon, the stuff that supposedly works against incipient diabetes, in moderation: the amount used by the researchers is within the supposedly safe limit. Just.

But of course this means I’ve wasted my money on Amazon’s horse pills. Ohhh well!

All pretty dubious, I’d say. But nothing ventured: I decide to add 1/4 teaspoon of the Saigon variety 3 times a day to what passes for my diet. If this isn’t toxic (it apparently could be), it may be redundant, since I routinely drink a fair amount of tea and coffee and eat a fistful of blueberries every day — all supposedly having a similar effect.

We’ll believe it when we see it.

What is more likely to have the “effect” is getting off the sauce. As it develops, prediabetes and diabetes are not the only potential causes of peripheral neuropathy. It can also be caused by alcohol abuse and by vitamin B12 deficiency. We know I’m low on B12. And, to my doctor’s horror I have a glass or two of wine every day, with dinner. I’m not exactly getting soused every day, though: two glasses of wine with a pile of food fit for the Queen of Sheba is not the same as getting shit-faced every day. Nor am I such a lush that it causes me great pain and suffering to substitute iced tea or water for the vino. So…losing the wine and  losing some weight (I’m 10 or 12 pounds overweight again: the result of spending day after day loafing with a computer on my lap) are evidently in order. Whether these strategies will help remains to be seen.

All of this therapeutic tee-totalling and dieting is complicated by the fact that it is too damned hot to get any exercise. It was supposed to be 118 here today — we missed the mark by two degrees And with these damned precancerous growths sprouting up all over my hands and legs and back, I’m not allowed to go into the pool during the daytime. Like Dracula, I must stay out of the sunlight! The dog and I walk about three miles before sunup every morning — about an hour’s jaunt — but evidently that is not enough!

And what really works on the tingling is ibuprofen. One tablet of ibuprofen tamps it down by about 80% and lasts about four hours.