Well, things are looking up in the swimming pool department! For a change. One adventure down, a new one comin’ up. 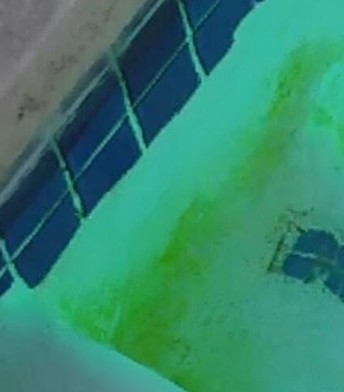 This, from the Web, is pretty extreme…but you get the idea.

Mustard algae is a microbial plant whose growth pattern reminds you of moss. It sets its little tentacles in the plaster of your pool and grows with great delight on the walls, across the steps, and even all over Harvey the Hayward Pool Cleaner. It doesn’t turn the water green, as some types of pool algae do. It creates wall coverings, as it were.

It is profoundly resistant to chlorine. I’ve found it growing, in gay abandon, inside a chlorine float! So you can pour as much poisonous chemical into the drink as you like, and it will do nothing for your mustard algae problem.

I found the easiest way to keep it under control, once the weather is warm enough to swim, is to put a high-pressure sprayer on a garden hose, drag it into the water, and blast the stuff off the walls. This will give you a clean(-looking) pool for about…oh…16 hours, maybe.

Suddenly one day, along about 10 days ago, the mustard algae disappeared. GONE. Absent. An invisible algae infestation.

Here is what I believe happened…

You’ll recall that by the end of June, I was running out of money. Chlorine is damned expensive, and since it doesn’t do any good, I delayed buying it. With the pool’s chlorine level lower than that of the drinking water that flows out of the kitchen tap, I was feeling a little desperate.

But in the shed, I had two bags, probably out of date, of a chemical that Leslie’s Pools calls “Fresh’N’Clear.” This stuff contains no chlorine. It’s an oxidizer. Leslie’s peddles it as a “non-chlorine shock treatment,” but that’s bullsh!t. It’s not a shock treatment. About all it does is clarify the water if it’s looking a little cloudy. My favorite Leslie’s store manager, who occasionally slips up and says something honest to the customers, long ago informed me that it has exactly zero effect on algae of any kind.

Coming across these two packages — in effect a double-dose of oxidizing chemicals — I thought, WTF! Got nothin’ else…might as well get rid of ’em both. So, blithely enough, I dumped them both in the drink.

Next morning, when I would normally expect to scrub off the prior day’s growth, no algae festooned the walls and steps.

It was a day and a half before a little bit of algae began to reappear, and even then, it wasn’t much. At that point, I could afford to buy a couple bags of chlorine. While I’m at Leslie’s aquiring their product (yes, I do buy Cl from Leslie’s, because it is objectively true that their products are superior to those sold in big box stores), I mention to my guy that this strange thing happened.

He looked genuinely puzzled. I said there’d been plenty of daylight hours — a day and a half, which is long enough to grow a fine new mat — and so I was pretty sure the Fresh ‘N’ Clear had somehow interfered with its growth. He cogitated about this for a moment and then said, “The only thing I can think of is that maybe the stuff freed up some chlorine ions, or something, that remained in the water.” I say, “There was no measurable chlorine in the water. I tested it more than once.” He says, “There’s gotta be a reasonable explanation.”

Neither of us can figure out what it is. It just is what it is…

So that very night I fly out there and dump two full bags of chlorine into the drink. Best to hyperchlorinate at night, because sunlight breaks down chlorine in pool water.

Next morning: not a sign of an alga. Algum? Amalgum???? Not even in its favorite places. Nowhere are any visible algae attached and growing. The water is as clear as crystal. Next evening: none. Next day: none. Days later: hardly any visible anywhere.

What in hevvins name does this mean?

I don’t know. But the stuff has so far not come back in any force. Here and there a few very slight smears of it occasionally, nothing that one would get exercised about or need a high-pressure sprayer to remove. Last night I administered two more bags of Fresh ‘N’ Clear. This morning: nary a bug.

It was so nice to jump in the water after the morning dawg walk and just swim! And not spend the time scrubbing algae off the walls.

It’s been about a week, and the stuff hasn’t returned. This evening I’ll dump another two pounds of chlorine in and let the pump circulate it all night.

Only thing I can figure is that somehow something killed it off. Whether it was the oxidant… ????? …it seems unlikely. However, there doesn’t seem to be another explanation. Unless the stuff died of old age…

Meanwhile, the Decision Has Been Taken: resurface the pool this fall. Later this week I’m meeting with my favorite pool company’s guy to decide what color of Pebblesheen to apply and to set up a couple weeks next October for the job.

You don’t want to replaster in the summer, for three reasons:

1. It is a two-week job, and you sure don’t want to take away from your swim time in 115-degree heat.
2. Our kind of hot weather can dry out plaster before you can refill the pool, causing cracking, peeling, and a generally substandard job.
3. The damned City jacks up the water rates in the summer, and they also determine next year’s billing rates based on the amount of water you use in the summer. I’m already using more than enough just to keep the plants alive, without adding another 18,000 gallons to the tab.

So, October or November it will be.

Financial Advisor Dude says there’s plenty of cash money on hand to cover the ±$10,000 job. So rather than going with the low-end plaster (which would normally be my choice), I’m going to spring for the much more durable Pebblesheen product — it’s a finer, smoother grade of PebbleTec, which supposedly will not remove the skin from your feet if you’re active in the pool. 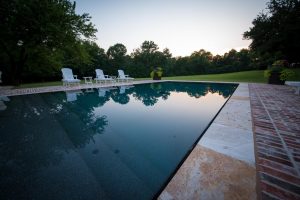 So the question is, what color to choose. In passing, I’ve been intrigued by the idea of a dark color, because (supposedly) this causes the water to look reflective, like a natural pond. (Presumably, it would also…ahem…hide the algae.) But it also increases the water temperature. Pool Dude says it can raise water temperature by around four degrees.

While that probably would extend the swimming season a week or two on each end, at this time of year four degrees would be a lot. As we scribble, that’s bathtub water out there. You get in a pool because you want to be refreshed, not cooked like a lobster. IMHO another four degrees would make that water unacceptably warm.

Additionally, Pool Dude reports that the darker colors tend to fade. Pebblesheen’s “black” turns to gray after a few years. And so, he says, do all the other colors. He says the minerals in Arizona’s deliciously flavored water cause any colored pool finish to gray out over time. And since, with decent care, this finish can last 15 or 20 years…what would be the point?

I’ve never been displeased with the plain plaster-white finish. In an eight-foot-deep pool, the water alone refracts light so as to create a blue color. In the evening, it’s reflective and pretty. So I’m inclined to stick with a white or off-white color. Pool Dude says one of the options is a white that looks marbled, which he favors because over time dirt, minerals, and pool chemicals tend to stain any finish to some degree. 🙂 If the surface is supposed to look marbled, so much the better.

Since we’ll have lots of time  — a good three months — I’ll ask him if he can show me some pools with different colors of the product before making a final decision.

The last time this company replastered the pool — which was after Tony the Romanian Landlord trashed it by throwing about five gallons of used motor oil over the back wall into it — they chipped the Cool Deck in a few places. The insurance company, after having ponied up something over $10,000 for the clean-up, repair, and replastering, refused to pay for a Cool Deck repair. But…turns out that small dings are not very hard to fix. Apparently. There’s even a DIY kit, which looks suspiciously easy to use.

I’ll ask Pool Dude if his guys can touch it up while they’re here. Failing that, though…there are only five small dings. If I can match the color — which should be easy because Cool Deck is pretty standard — I’m sure that’s something I can fix myself. Especially if Pool Dude or the Leslie’s Guy will advise.

So: therein lies the future for the pool. I’m looking forward to getting rid of the agèd, pocking plaster and maybe having something that’s a little easier to care for.