The American Express bills came in yesterday, for both the personal and the business cards. The tab for personal spending?

To what can we attribute this miracle?

Well, I’ll tellya: I think it’s the Costco “envelope” budgeting scheme. Apparently, that strategy is influencing other kinds of spending. Because of course, since Costco dumped AMEX for Citibank’s Visa (I refuse to do business with Citibank ever again — period!), I haven’t been able to use the AMEX card at Costco. So…

Why on earth would putting all my Costco purchases on a pre-purchased cash card affect expenses normally racked up on AMEX?

I think it works like this: Making a list near the beginning of the month of everything that I know I need, including the estimated prices of those items, and trying to keep the total cost to $300 or less forces me to think carefully about what I really do need.

That is, the envelope method causes you to plan for purchasing. And when you plan, you get a grip on spending.

By thinking ahead a full month, I’ve been able to restrict almost all my household and food purchases to Costco, and that seems to limit impulse buys at other venues. In other words, I don’t have to run to a grocery store to buy, say, a can of Comet, and so I do not buy a bunch of other stuff while I’m there. Ultimately, I buy only the things I really need; not the things I imagine, on the run, that I can’t live without.

Yes, there was one impulse buy at Costco last month: I bought a pair of black pants, because our choir director asked us to wear black this year under our robes. Did I have a pair of black jeans? Yup. At least two of them. Did I need a pair of black pants? Nope. But they did not push spending past the $300 limit on the cash card. And they do look a lot dressier for church, and unlike other stretchy pants, they do have pockets to carry credit cards and the emergency phone (which can’t be left in the car at this time of year).

What happened, it appears, is that because of that careful plan-ahead, I bought almost everything I needed at Costco, within the $300 budget (plus the $60 for gasoline). Not feeling any crying need to buy much else, the result was that I simply stayed out of other stores.

{chortle!} I’d seen that $207 balance in the online accounting, but didn’t believe it. Thought it must have been a mistake (mine, no doubt: if it’s online, I’m unlikely to get it straight). But NOOOOO! 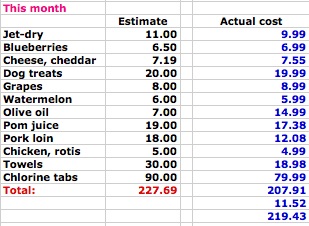