Wow! I just tried to order a $6 bottle of 400-i.u. vitamin D capsules from Amazon.  The cause of this craving is recent research showing vitamin D deficiency may make you more vulnerable to covid-19 (and many elderly folks do suffer vitamin D deficiency), and that adequate (not excessive!) vitamin D may have a protective effect against covid-19. But the ones I have, which I picked up some weeks ago, are 4,000 i.u., a massive overdose.

Vitamin D is not entirely benign. ODing on the stuff can lead to hypercalcemia (excess calcium in the blood), which can make you uncomfortable at best or good & sick at worst; kidney damage; heart problems or even a heart attack; brittle bones, dehydration, inflammation of the pancreas; and — ironically enough — lung damage. As I came to realize this, I decided I needed to back off from this nostrum. Studies that suggest it helps fend off the dread disease indicate that 400 i.u. is about the right dosage.

Well. I’d rather not risk my life traipsing into Sprouts for a bottle of pills. So what do I do?

Of course: order them up from Amazon!

A lot of fishy stuff is going on there (heh! no doubt because commercial vitamin D is often derived from fish oil…): some ads will not allow you to see the one- and two-star reviews (which I always check before deciding about any purchase from Amazon). Others indicate that reviews are better than they actually seem to be. Hm. And of course fish oil is akin to snake oil, so I’m trying to be careful with this.

Finally settle on one from Whole Foods. Price is just under $6 for a hundred pills. I go to order this stuff, go clickety-clickety, and up comes an invoice for $25.99! 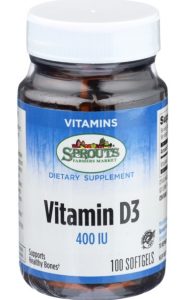 Sprouts has it for six bucks! And a three-minute drive down to the corner market.

Y’know, folks… Vitamin D is available for free. Your body makes it in response to sunlight. Wash off the sunblock, go outdoors, and sit in the sun for 15 minutes. Et voilà! Your full dose and then some.

So I try to deep-six the order…and Amazon’s system will not let me cancel it!

I try to get “Help” to find out how to cancel an order in mid-process and get nothing but useless bots. In-fukkin-furiating!

It looks like Amazon is going to charge this rip-off to my AMEX card.

So I call American Express, get a very fine CSR on the phone (this would be why we use AMEX…), and explain the predicament. She says it doesn’t look like Amazon has put a charge through yet.

Well, say I, I can’t see a way to cancel the order.

She says, Just crash out of it. If that doesn’t work, then we won’t honor the charge on this end.

It appears that she was right: it did work. After closing out of Amazon and logging back in, I don’t see the order. So I assume that closing out of an order before completing it cancels it and disappears it.

This is the first time I’ve experienced anything like what appeared to be deliberate gouging at Amazon. Whether it was coming from the merchant or from Amazon, I dunno. But it’s good to know that it can happen,.