Okay, first off, the plug: If you live in the Phoenix area — as many of Funny’s readers do — and you think you’ll be needing a new large appliance at any time in the future, you need to know about B&B Appliances, up in Sunnyslope.

Remember how Sears used to have an outlet where they’d sell returned appliances or appliances with tiny (essentially unnoticeable) dents or scratches? Well, B&B does that as a business model. They also sell new appliances for a number of brands. And they have a very highly rated repair service. I went up there this morning to ask the proprietor a question, and…I think I’m in love! 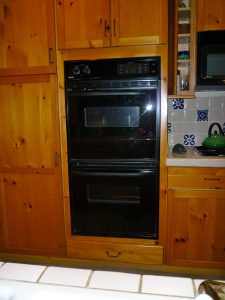 Seriously: you’ll recall the nonfunctional oven. At last, the dust being more or less settled between client projects just now, I decided to get the control panel fixed, then leave the breaker switched turned off permanently so that if I ever sell the house or my son wants to sell it after I croak over, the place will have a working oven without my having to go out and spend $2,500 for the privilege. Sears, we know from experience, charges a little over $500 to fix the damn thing — which they’ve had to do twice since I moved into the Funny Farm.

On the outside chance that a few bucks could be saved on the present fix-it job, I got a referral to an appliance repairman from Wonder-Handyman. This guy will be visiting a little later today. While we were on the phone, he looked up the model number and opined that the control panel is no longer being made, but (said he) it could be shipped off to a place that will rebuild it. Cost: about $450. That’s a little less than I’ve paid for Sears’s repairs.

But I wondered. So this morning I trotted up to B&B and asked if it was true the part is no longer made but can be refurbished. After much prestidigitation. the guy discovered that no, it’s not true; yes, you can ship off the Deceased to some place back East, where it can be rebuilt; that the rebuild cost is indeed around $500…and…if you want a BRAND NEW one to blow out by using your oven in a normal way, you’ll now have to pay $750 for the damn thing.

The B&B guy recommended the rebuild as the least expensive alternative: that is…rebuild and never use the oven again. Let the next owner figure out what to do with the thing. He also remarked, in passing, that these fine made-in-China control panels last an average of five years.

While he was exploring the Internet in search of full and accurate answers to my questions, I explored the old-fashioned high-inefficiency (read “working”) clothes washers on display. They had a nice variety of agitator washers, new and refurbished, from major brands. 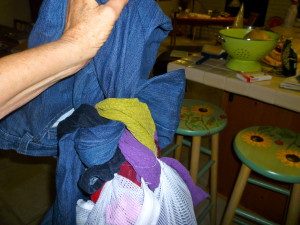 i. hate. the. samsung. goddamn. washer!

So I asked him about his choices, explaining about the wonderful clothes-braiding Samsung and remarking that Samsung had given M’hijito $150 for his recalled exploding Samsung. He laughed and said that one of his customers had been offered $34 for hers . She opined aloud about where Samsung could shove it.

He drew my attention to the Speed Queen, a brand I’d never considered in my life. Speed Queen, he said, for years has focused on the commercial market: they make heavy-duty washers for institutions and for laundromats. When the fine, politically correct new HE washers came out and Speed Queen’s executives became aware of the Season of Our Discontent, they decided the company should venture into the consumer market. Hence: these sturdy, large-capacity, steel-tub machines.

And…hang onto your hats, folks…SPEED QUEEN WASHERS ARE MADE IN AMERICA! The guy said they’re not just assembled here: the parts are made in the USA, too. He added that the life expectancy for the machines is about 20 years.

I thought about that. Stuffed a lightweight cotton summer blanket into the hated Samsung. Ran the hour-and-ten-minute cycle. Pulled it out, pretty much sopping wet, and threw it into the surviving Kenmore dryer. Thought about it some more.

As soon as New RepairDude is safely on his way with the dead oven control panel, I’m gonna jump in my car and FLY back up to B&B to buy one of them thar Speed Queens.