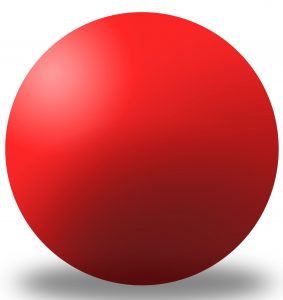 …there are hardly any other dog owners out walking around with their pooches. The weather is gorgeous at that hour, the desert air cool as swimming pool water flowing over your skin. And the morning sun is rising like a red rubber ball.

Yeah: Literally like a red rubber ball, because of the smoke from the wildfire up around Roosevelt Lake. At 100,000 acres, it’s the sixth-largest fire in the state’s history, so we’re told. It’s been burning for many days and so far is nowhere near under control. This morning you could see the smoke hanging in the air over the city. Some moron got it started outside the old mining town of Superior. And the sun? Yes, it looked exactly like this red ball. ⇒

At any rate, the dog and I survived preparing our respective breakfasts in the garage. Probably the one really wise thing Satan and Proserpine did in this house was to install a fiberglass (? i think) work sink in the garage, to accommodate Proserpine’s pottery-making hobby.

A little further exploration revealed that the defunct faucet is apparently not really a Price-Pfister fixture but a little masterpiece made by Danze. And lo! Amazon carries the thing. Rather than looking sorta like the set that’s in my kitchen, this thing here looks EXACTLY like it: 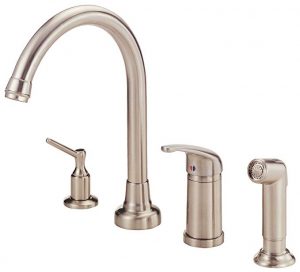 Frank the Plumber did a little checking around and found that one of his favored plumbing supply stores wants about $315 for the thing. Plus taxes. And it’ll take ten days or so to get it. Well, that’s about what I paid for it 16 years ago at the Great Indoors. Meanwhile I had the ad up on Amazon while he was on the phone: “Sez here $217 and free shipping. And no wait: it supposedly will arrive on Wednesday.”

So I felt pretty smug about that little coup. Frank remarked that 16 years is a good long time for a kitchen faucet to persist. Especially so, I would add, in a house where the proprietor cooks all her own (and her dogs’) meals: the thing gets plenty of daily use.

That definitely is THE set, not some knock-off missing the spray attachment. And the customer reviews are far, far more positive than the grutches about the Price-Pfister version.

Really, I should have replaced this thing a year or two ago…it’s been limping along, groaning and moaning when it’s turned on. But I’ve been too lazy to track it down…haven’t been impressed with the near-misses I’ve seen at Home Depot, Lowe’s, and Costco. VERY tickled to have found the real thing at Amazon…and to get it for about a hundred bucks less than local retail, with no schlepping around the city or endless stands in line.

Shee-ut! I put some water on to make tea and then went off and forgot it. Fortunately am sitting in the family room and so was alerted by the strange popping noises the teakettle started making. Speaking of expensive devices from Amazon, I sure hope the damn thing isn’t ruined. I carelessly left the lid open so it didn’t whistle when it boiled dry.

You understand…I buy those pricey whistling teakettles because of my propensity to put a pot of water on the fire and then to wander off and forget it. Oddly, they don’t seem, to do the job unless you manage to remember to close the whistling cap….

3 thoughts on “At Five in the Morning…”