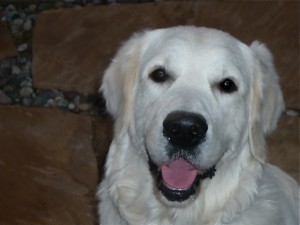 M’hijito is stuck in Show Low, and Charley the Golden Retriever is dying. He may already be dead as I write this. My son is beside himself with agony and I’m beside myself with sorrow and worry for him.

He drove up to the high country, taking the dog with him, to go camping and fishing on the Rez. At Show Low a wide spot in the road north of Payson, he stopped to take a rest and let Charley stretch his legs. When he got him out of the car, Charley tumbled out onto the ground and he discovered the dog couldn’t walk or even stand.

Charley hates riding in the back of M’hijito’s new car. He didn’t like riding in the old car, which was a sedan, but for reasons no one has been able to figure out, he simply loathes the Ford Escape, and he gets stressed whenever he’s made to ride any distance in it. M’hijito thought his panting and carrying on was a manifestation of the usual stress, and when he saw the state the dog was in, he thought Charley was having a stress attack.

He called me on his cell. I advised him to take the dog to a vet and looked up the main vet in Show Low, who has a 4.5-star consumer rating, interestingly enough. He rushed the dog over there, where he was told the problem was heat prostration.

The dog’s temperature was 107 degrees!

As they were trying to cool Charley off, they were blaming my son — the vet evidently thought he’d left the dog locked in the car and gone off.

That is absurd. My son dotes on that dog and would never do any such thing. Charley was in the back of an SUV with the air-conditioning going the whole time. I called Chuck the Wonder-Mechanic and asked if it was possible that the back of a Ford Escape could get hot enough to harm an animal if the vents in back were nonfunctional. He said he didn’t think so: because the front seats are separate, like captain’s chairs, enough cool air from the front vents would blow between and under the seats  to keep the dog from overheating.

At any rate, now M’hijito blames himself.

The vet said Charley would probably not live until this morning, but if he does live until today, he will probably die in agony sometime during the day. In that case, he suggested, it was best to put the dog down.

I’m quite sure my son would never have left that dog in a hot car: that would be utterly against his nature. And though I expect the back of an SUV could get warm, I’d be surprised if it would reach the level of “hot” — as in 107 degrees. Once you’re up the hill above Black Canyon City, the climate cools significantly, so even if the AC system were not working, if it was reasonably cool in front it shouldn’t have been dangerously hot in back.

A little research shows that dogs can suffer vestibular strokes or heart attacks, which would elicit symptoms similar to Charley’s…except for the 107-degree temperature. That says the animal was overheated and is definitely life-threatening. More research shows that about 50% of dogs afflicted with heat stroke survive, if they receive care soon enough. Of course, we don’t know how long Charley was in this condition: my son had been on the road four or five hours by the time he discovered it, and an hour of that time was spent stopped dead by road construction. Maybe the car could have heated up that much if it wasn’t moving forward — I understand the construction is in the Salt River Canyon, which would be a couple hours outside of Show Low.

And still more research reveals that the longer a dog stays in a veterinary hospital, the more likely it is to survive. Although…that’s deceptive.

One study of 42 dogs that presented with heatstroke found that patients that died from the condition did so within 24 hours after development of signs. Those that were able to survive longer than 48 hours lived.11 In the same study, all of the dogs that were hospitalized longer than 72 hours survived, despite evidence of multiorgan involvement.

The thing is…if most heat stroke victims die within the first day, then the ones who survive are more likely to live anyway. So to say that 100% of dogs hospitalized longer than 72 hours survive is only to say that dogs who manage to get through 72 hours alive are not going to die of the heat stroke.

The key to survival, though, is rapid treatment: cooling the dog’s body temperature back to normal as quickly as possible. But…if this happened to him while they were stuck in the construction mess, Charley would have been suffering that life-threatening elevated temperature for a two or more hours before M’hijto discovered it.

M’hijito wants to bring the dog back down into Phoenix today. But that will entail getting someone to help him. I offered to drive up there, but the thing is, if he’s going to be in the back of the vehicle tending to the dog, we would have one (1) driver to get two cars down the hill.

His friends are in Payson. He’s talked to them and apparently they’re willing to come meet him and help him get the dog back into the city. His father and the new wife have also said they’ll go up there.

However, given the business about the survival rate, I’ve suggested he should leave the dog there, without interrupting the IV and oxygen for an afternoon. He could drive down and pick me up, and we could then turn around and drive right back up the Rim. Today is Saturday: his vet will be closed by the time he can get back into town. So bringing Charley down today will mean risking his life further.

15 thoughts on “Beside Myself…”