Let me amend this story to add that I think my son is amazing, in that he’s willing to take on the task of connecting plumbing and installing two expensive pieces of equipment. Where he got this particular kind of bravura escapes me. His dad would never have done such a thing — he believed one of the jobs of money was to pay people to do household and yard tasks. And I tend to go along with that: if I can get someone else to do some skilled or semi-skilled job, I’ll cheerfully bribe them to do it. He must have inherited this tendency from his grandfathers — my father, who was extremely handy; and his dad’s father, who was an engineer.

Ever been here, done this? 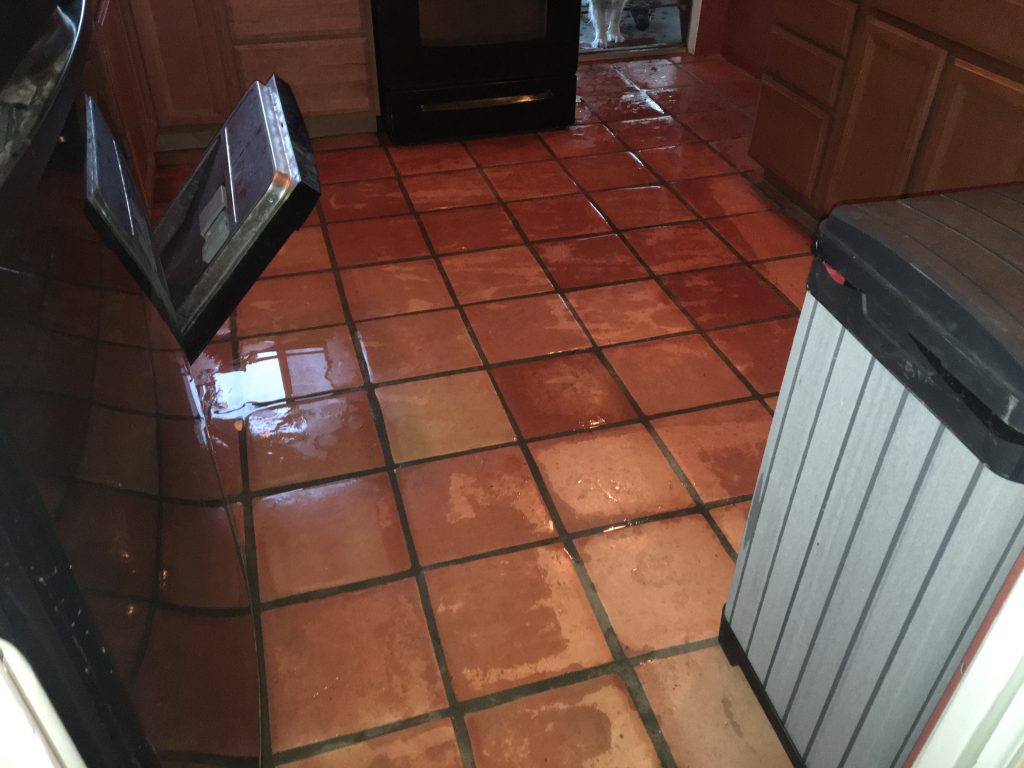 Start in the kitchen… 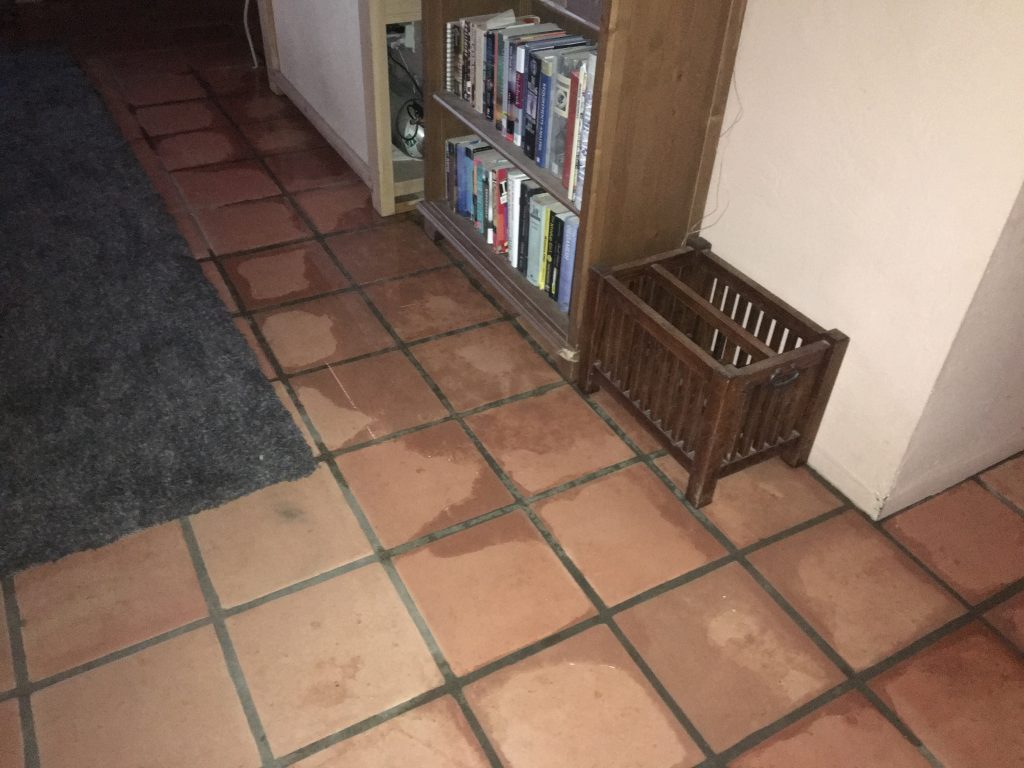 Run out into the living room… 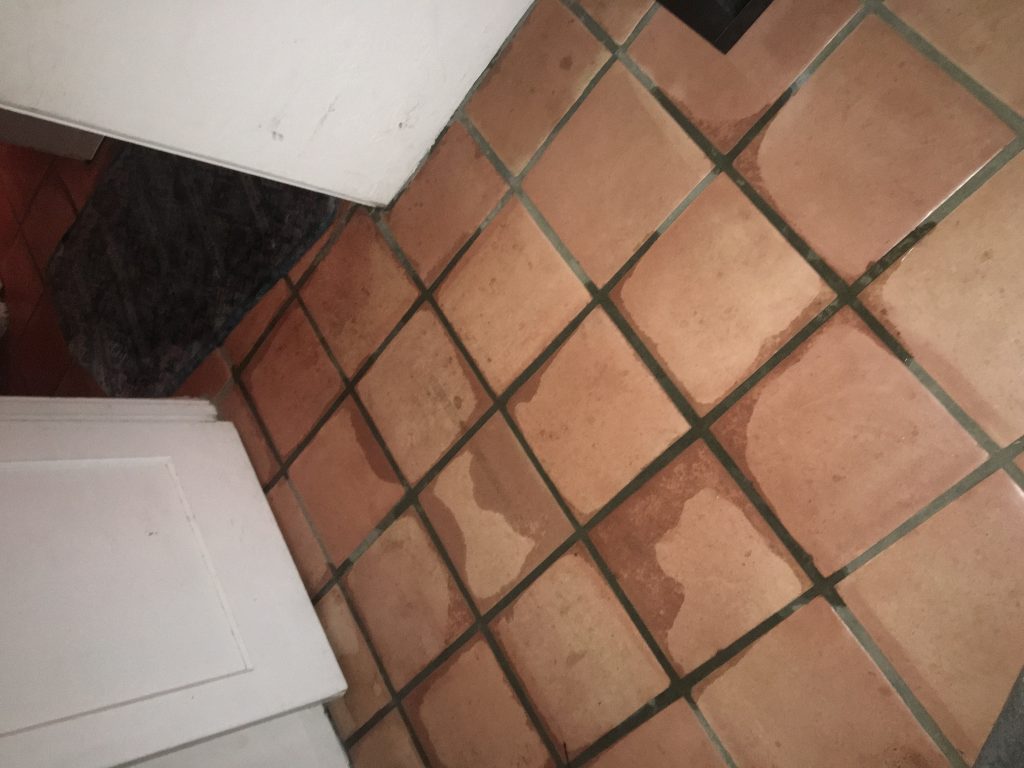 And down the hall to a bedroom

Good morning, Vietnam! This is what greeted M’hito as dawn cracked yesterday morning.

The water line to the refrigerator’s ice-maker ruptured. Water inundated the kitchen, flowed down the hall and into a bedroom and a bathroom, and puddled up in the living room.

Fortunately, he was dog-sitting his friends’ very smart little reservation dog — a canine Mexican immigrant — which unlike Charley the Golden Retriever was bright enough to figure something was awry. The dog woke him up about an hour before he normally turns out of the sack. Luckily: otherwise it would’ve been a whole lot worse.

In the ensuing frenzy, as he tried to pull the dishwasher (right next to the fridge) aside to get in under the woodwork and turn off the water valve, he broke the door off the thing!

So…now he had to buy a new Bosch dishwasher.

This fiasco elicited 20 miles of driving to two Lowe’s outlets, purchase of the new machine, and another trip to a hardware store to buy the correct fittings to replace the wrong ones sold by Lowe’s. Ain’t it fine?

When I left his house — around 8 p.m. — he was about to climb back under the kitchen sink to try to attach and install the new dishwasher, which we hauled home in the back of my truckoid. And reattach the refrigerator. As of this morning, said strategy had yet to work.

Would he buy this fine device from the appliance store around the corner, where the owners are honest, the staff know what they’re talking about and will tell you the truth with no BS, and they’ll come and install the thing? Heck, no! Lowe’s had the desired model on clearance… How could any sane person turn it down???

😀 Kid’s a chip off the old cheapskate block…

From what I can tell, the refrigerator water line, which was made of some sort of nylon stuff rather than the preferable twisted-steel stuff, became abraded when the fridge was moved briefly. It picked the wee hours of the morning to fail.

The dishwasher was 12 or 14 years old — about twice its engineered lifetime. But still…yipes! One would like having a choice as to when to buy a new appliance.

Fortunately, the house is all tiled. Saltillo tile is usually installed without baseboards, or else with a row of tiles cut in thirds and mortared to the wall. The house’s walls are lath and plaster (!!!!). Directly above the floor is a sturdy foundation of what M’hijito says is wood but what I believe to be metal, at least in places (could be wood, but not like the junk we get today). The plaster extends over it, and 65 years of paint jobs have sealed it in. When he wasn’t looking, I inspected and couldn’t see that it was seriously damaged — fortunately, the dogs rousted him soon enough that he was able to mop up the puddles before the water soaked into the walls. I think.

Also fortunately, because the AC system doesn’t work efficiently, he has boatloads of fans, including one of those things that clean-up crews use to blow-dry saturated carpets. So by the time I got there yesterday afternoon, the floors were pretty well dry.

Man! When he told me this story I was thinking “homeowner’s claim…won’t the insuror be thrilled…” But it now looks like no damage was done to the structure

Lordie, but the employees at Lowe’s here in Phoenix are freaking incompetent!

He looked up the desired model online and ascertained that a Lowe’s way to Hell & gone up the I-17 had one in stock. We get there. We diddled around with a guy who seemed sweet despite lacking a few IQ points, paid to buy the thing, pulled the car up to the door…only to be told…well, no. That wasn’t the right model.

So we had to get a refund, drive even FURTHER up the I-17 to a Lowe’s in Whiteyville, a flight-induced suburb almost to freaking Anthem, where…well, yeah. We found the desired washer.

He now buys that and new plumbing connections for both the washer and the fridge. We load the machine into my truckoid and stagger away through the rush hour traffic (all of this travel has been going on during the height of rush hour, which, on the homicidal streets of Phoenix, is a steroid-driven species of Hell). Get back to his place frazzled but still living.

He now endeavors to reattach the fridge and finds — of course — that the line they sold him is too short.

It’s getting late. Our regular Ace Hardware is closed, but one is open down in Gang Central, an area that is, shall we say, the direct inverse of Whiteyville, that which all those pallid types have fled. There we find a couple of guys who sound like they know what they’re doing. They sell him a longer connection.

By the time we get back, it’s after 8 p.m. He throws me out and, as I exit the front door, climbs under the kitchen sink to (he hopes) reconnect the appliances.

All I have heard this morning is “it didn’t work.” He’s back at the office. And presumably he has no dishwasher. Is the fridge running? I dared not ask.

He left the office at 3 yesterday, falling behind in a busy work schedule. So now he’s back at the office with no functioning dishwasher. The fridge, of course, will run without an icemaker; I hope he plugged that thing back in and left it operating.

Here is, I believe, the Funny about Money frugalista message to be gleaned for that adventure:

Spring for the cost to have the seller install an appliance! When you think about how much one of these contraptions costs, $60 or $100 to have it delivered and installed is a bargain. More to the point, compare your own hourly wage against what it will cost to pay a handyman to come clean up after you and put the thing in right.

Even if you don’t make all that much, remember to add in your job’s benefits: those are likely to jack up your pay above the cost of having a new dishwasher, refrigerator, or stove delivered and installed. I don’t know how many hours my son spent before he gave up last night — likely at least a couple. But by 8 p.m. he’d been pounding around for five hours, dealing with this fine flap. Now, admittedly, that did entail driving to two Lowe’s outlets. But we were back at his house by dinner time — around 5 or 6 p.m. So figure he put in at least five of his hours — and had to take two or three hours off work for the privilege.

It would not have cost five hours’ worth of his time to pay someone to deliver and install the machine. Figure he makes  about what I used to earn: $40 an hour (probably more like $45 now), plus another $10.41/hour for the panoply of benefits: $50.41 an hour. Not counting the aggravation factor…

So say it took two hours to buy the machine, leaving three hours of screwing around: it costs him $151.23, and he still doesn’t have a functioning kitchen. Lowe’s declines to publish its installation fee online, but in 2016 they were building a reputation for gouging. But even at $200, that’s still only $50 more than the value of his time. IMHO he would do better to hire a handyman to install it — my guy would charge about $60.

This, of course, is why I personally will not buy appliances at Lowe’s or Home Depot. Up around the corner on Gangbanger’s Way is a local appliance store that treats its customers fairly and delivers professional service.

If you have a paying job, DIY appliance installation is probably a false economy. The value of your time is more than what it would cost to have someone who can do the job quickly and smoothly. And that doesn’t even count the physical and psychological cost of the stress and frustration the job entails.