Went over to the church yesterday to help set up this year’s fundraising book sale for the choir. It’s a fairly big deal. You’ve never seen so many books inside a single room, this side of a library. When you look at piles and piles of books, you have to wonder: who writes all these titles, why, and more to the point for a micropublisher, how can anybody possibly compete, given the sheer mass of product out there?

So what did I learn, if anything, from this?

• Despite the prevailing wisdom about the profitability of flooding Amazon with electronic titles, one probably would be better off to publish fewer titles of high quality or broad pragmatic use. Instead of publishing a lot of titles, it may be better to invest one’s time and financial resources in marketing one or two titles.

• Very, very few titles stand out. Too often — especially where genre novels are concerned — cover design conveys the message that you’re looking at more of the same. Even literary novels rarely grab one’s attention, unless the author is someone  you’ve read and liked. Or hated. Many cookbooks are similarly uninteresting; ditto travel books. Some children’s books stand out, partly because design is integral to the entire package, not just to the cover.

So here’s a question: Would it be possible to create a book for adults whose interior design is as important as the cover art? I mean, other than a coffee-table book. Could a novel or a history book or an inspirational book be designed in the same way as a child’s book, without bankrupting its maker? That really is a question, because as we know, children’s books are very expensive to produce.

• Some types of amateurishly produced bookoids become collector’s items. This is especially true of cookbooks. There are folks out there who collect cookbooks produced by clubs, charitable groups, schools, and the like.  Some of the older examples we put out on tables look like they were run off on mimeograph machines; others appear to have been printed and coil-bound at Staples or OfficeMax. But most of those didn’t stay on the tables! Volunteers grabbed them up and paid for them as we worked.

• Every title must stand out. If you’re going to hire a designer, it will pay to hire the best. A run-of-the-mill designer will create a run-of-the-mill cover, and your product won’t be noticed whether it’s on Amazon or a bookstore shelf.

• Whether you’ve got a truly great book or just another piece of escapist genre fiction, marketing is key. In a vast tsunami of books, not even the best of books will be noticed unless it’s drawn forcefully to the public’s attention.

• Nonfiction books should be tightly focused on a specific aspect of their subject matter. So many cookbooks, so many travel books, so many inspirational books, so many craft books, so many this, that, and the other books are out there that a publisher needs to draw the buyer’s attention to something different or highly specific in order to stand apart from the crowd. That, my friends, is easier said than done.

No doubt many more messages lurk in the second-hand book sale.

In closely related precincts, while I was at Whole Foods last week, I asked the manager if he’d be interested in selling the very whole-foodsy 30 Pounds/4 Months diet/cookbook. He was interested but said at the moment the post of “forager” (yes!) for the department that sells books and magazines was empty — they were looking for someone to fill the job. He suggested I check back now and again.

If you want to work for Whole Foods, you have some retail experience, and you live in Phoenix, you might want to keep an eye on their “help wanted” postings. 😉

So far, I have yet to figure out how to fix the formatting for the .mobi version of 30 Pounds. Nothing I’ve tried works. Short of retyping it from beginning to end in a fresh template, I cannot see how to fix it. I suppose I’ll have to track down an ebook formatter who can break into the code and clean up whatever weirdnesses Wyrd has inserted in there. My guy right now is pretty swamped — people are lined up at his door to get him to work on their bookoids. He’s usually slow, but I’ll bet he’s really slow right now.

The advertising campaign I launched on Smart Bitches/Trashy Books seems to at least be putting eyeballs on our book covers. The most recent report shows, in this week alone for the four books we’re advertising:

How many of the folks who clicked on the ads bought a book? None. We’ve sold two Racy Books this month…but neither of them were those Racy Books.

We’ve also sold one, count it (1) copy of the first collection of Fire-Rider books. That is not anywhere near as well as we did last month, which wasn’t what one would call “very” well.

However, Fire-Rider is garnering some very nice reviews. Book I, for example, nailed FOUR five-star reviews! If  ego boosts bought groceries, this one would stock the pantry for a year:

Reminds me of Robert Adams’ _Horseclans_ series in the way you can dimly see the strands of our present world shimmering in the fabric of a far-future United States.

I had a bit of trouble at first keeping track of the characters, but that resolved as the story went on, and I found the developing interrelationship between the two characters, Kay and Tavio, intriguing. One thing I appreciated was that while there was a lot of information about this world descended from ours, it seeped in through the story and wasn’t dumped on me all at once.

My chief complaint was that the story ended just as the story was getting interesting – I know, the nature of episodic fiction! I’ve added the first boxed set to my wishlist. 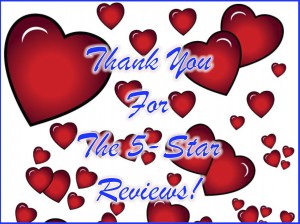