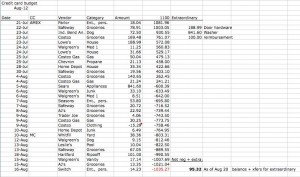 Okay, I admit it: I have neglected the budget. Yea verily, I have lost the art of penny-pinching.

Result: I’m running out of money, two months before the start of my next “personal fiscal year,” which starts in September. In 2017, that’s when I took the last Required Minimum Drawdown from the 401K, which was supposed to last a year.

So next year I have to figure out how to live on 21 grand plus a pittance from Social Security. Since running this house and feeding me and the dogs consume about 2 grand a month, that’s a challenge.

Just now I’m as close to broke as I can get, budget-wise, considering that I have enough cash in the bank to cover about six weeks of expenses, and it’s eight weeks before the start of September.

The other day I mentioned the “envelope method” plan I’d cooked up: fill a Costco cash card with a budgeted amount to spend there during a month, and when it runs out, stop buying. This makes some sense, though nothing is to stop me from streaking out of the Costco over to the nearest Safeway and filling out the shopping list…probably at more expense than just buying everything at whatever CC would cost. Hmmm….

Whilst staring blankly at an unfriendly spreadsheet, a little INSIGHT dawned… Don’t budget by the month. Budget by the year. And instead of using cash cards as “envelopes,” use bank accounts. I already have a checking account, which juggles cash flow; an emergency savings account (containing $4.61); and an account to hold payments from Medigap and Medicare B, preparatory to forwarding that money to the Mayo.

[The Mayo does not “take Medicare assignment.” This is a bureaucratic way of saying they don’t accept direct deposit from Medicare or your Medigap insurer. So, every goddamn time you go to the doctor or an ER or whatEVER, you have to field a blitz of ditzy little annoying checks, deposit them in your bank account, and then pay the Mayo. Right now one has been sitting on my desk for awhile, waiting for me to get around to the hassle of scanning and uploading it: $24.17. The Mayo’s outstanding bill is several hundred dollars… It is, in a word or two, a fuckin’ nuisance.]

Where were we? Yes, staring blankly, dreaming up a fresh scheme…

A little calculation showed that if I were to get a freaking grip on spending, in theory this year’s drawdown should just about cover 2018/19 expenditures, if nothing happens. By “nothing,” we mean no major car repair bills, no appliances having to be replaced, no giant vet bills, no dental work…a very big “nothing,” indeed. But let’s pretend a person could get through 12 months without having to confront any of those.

What if I kept the drawdown that just hit my checking account in my checking account, but did not keep Social Security income in checking? What if I auto-transferred each Social Security deposit over to the Emergency Savings account…. Said E.S. account is empty just now, putting me at considerable risk of future misery. Twelve hundred a month would, in theory, load that account with some 14 grand over the next year, allowing me not to have to spend crazily to keep up with routine month-to-month costs.

And instead of keeping the entire drawdown in checking, what if I transferred the $8,408 a year demanded by taxes and insurance (!!!!!!) over to the present tax & insurance savings account, now empty because the 2018 T&I bills have all been paid. What if?

What would then remain in checking would be the amount I could spend on living expenses. This would be much truncated by setting all the net Social Security income aside for emergencies. But since I now have approximately $0.00 set aside in emergency savings, the truncation would be very much worth it. And, according to my English-major calculations, if I could cut the Costco bills down from $300 a month to $200 a month, this scheme would be eminently do-able.

Why do I think it would work?

Because the AMEX billing cycle closed yesterday. I charge everything on American Express, mostly including Costco but also racking up bills at various grocery stores and other retailers. This month the tab was only $775. Basically, an AMEX bill reflects all living expenses except utilities, taxes, and insurance.

Yeah: probably “no.” But what’s to stop one from trying?

So the money from Fidelity hit the credit union this morning. Here’s what we now have:

So even though Social security will bring the year’s total cash available to something over 31 grand, the plan is to try to live on just $16,644.

So to live on this proposed new budget, I’ll have to cut spending by about $365 a month.

However, a backup fund will be growing at the rate of about $1200+ a month. If need be, I can draw down from Emergency Savings to make up the difference. So even if I regularly went over budget by some $363 every month, the red ink would only amount to about $4355. That would still leave something like 10 grand in Emergency Savings at the end of a year.

How to cut $363 a month out of normal spending?

It’s going to be a mighty dull year, I’m afraid. But I can’t be running out of cash two months before the end of every 12-month cycle. Something has to be done to get caught up with the spending