{sigh} I’m supposed to be working (still!) but can’t stand another minute of it and so instead have decided to abandon my livelihood in favor of blogging. For the moment.

PF Topic of the Day: revisiting the budgeting scheme I abandoned in 20-and-aught-14. Holy mackerel, what a Year from Hell! In more ways than one: financial fiasco and healthcare fiasco proceeded hand-in-hand.

Well before a hyper-sensitive mammogram’s little discovery of an alleged one-centimeter lesion — the one that sucked me into an inescapable vortex leading to a double mastectomy for “not a cancer” — the large unplanned expenses began. Yea verily: they started in January, with surprise pool bills, plumbing bills, car repair bills, and on and on and on… Once the health-care fiasco began, I just flat gave up.

What, after all, was the point of even trying to track one crazy expense after another, let alone trying to keep them under control, when even the Mayo Clinic with all its considerable corporate power could not begin to tell me what I really owed them? They still do not know. Neither do I.

It’ll be months before enough dust settles to figure out what, after Medicare and Medigap payments, I actually have to pay toward the $60,000 or $70,000 worth of medical misadventures.

Meanwhile, I’ve gotta get back on track. So, I’ve revived the system to track monthly discretionary and nondiscretionary expenditures, in an effort to keep the discretionary spending under $1200 a month. The current iteration is slightly less onerous than previous versions: in Excel, I’m not noting the vendors that absorb my livelihood, that intelligence, after all, being redundant with the data recorded in QuickBooks. All the new tracking system shows is each expenditure and the running total. 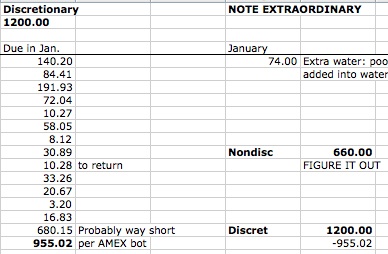 Last month I did pretty well: only $955 in discretionary expenditures — well under budget! — and $74 in extra water charged up by draining and refilling the pool. Not bad. This happened because I was flat on my back in bed most of the month.

As for February? Welll…..we seem to be making up for lost time. 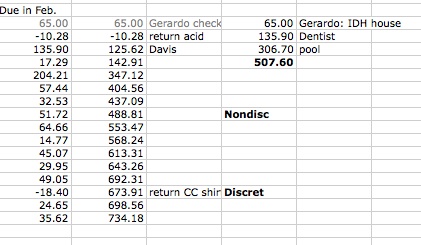 Extraordinary expenses are freaking through the roof: $65 to the yard dude for service above and beyond the call of duty at my son’s house; $136 to get my teeth cleaned; $307 to clean the pool filter and repair a part the disgraced Pool Dude probably broke.  Holy shit: we started out $507 into a budget of $1200 (which we’d like to keep down to $1100 if at all possible)! It’s gone downhill from there.

With $507 of extraordinary expenses and $734 of normal discretionary expenses, I’m already more than $40 in the hole: and 16 days remain to go in the discretionary budget cycle. By the end of February, mercifully a short month, I am going to be deep, deep in the red.

As yet no paycheck from Heavenly Gardens Community College, even though we’re into the third week of the semester. The joys of adjunct teaching.

Yesterday I bought gasoline, probably enough to last until the new AMEX cycle kicks in (not shown in these figures…). But clearly I can’t do without at least one or two grocery store runs between now and the end of the month. And we’re running low on dog food: that means I’ll have to go into Costco to pick up more large packages of chicken or pork to make new food, which I believe to be healthier for the dogs and cheaper than the closest commercial approximation of Real Food for dogs.

I’d planned to make one, count it (1) Costco run per month, limiting the $200 trips to that Emporium of Impulse Buys, but if that is to happen, I’ll have to buy twice as much dog-food meat per trip as I’ve been accustomed to purchasing at any given time. Even this, though, may prove cost-effective: every time I go into Costco, I come out with my bank account several times lighter than expected. In any given month, the fewer C0stco visits, the closer I come to ending on budget. So, even if I buy more of X product category in a given trip, stocking up on enough to head off a second trip that month will save money.

This month’s utility bills have yet to come in, of course, it being only the seventh. But in a February, power and water bills should both be fairly low, well under the $660 nondiscretionary budget. So with any luck the total discretionary + nondiscretionary should not exceed the total planned $1860 by very much. I hope.

But…the only way to keep within this limit, as the weather grows hotter and utility bills bloat accordingly, will be to keep a grip on grocery bills and the various nasty little surprises.

$1,860, by the way, is about $660 more than Social Security pays. Social Security is my only consistently reliable income source, adjunct teaching being the joke that it is.