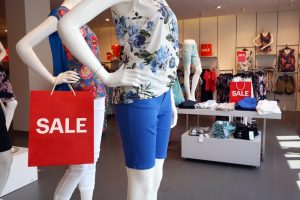 Today I donated two ever-so-slightly pricey tops — or maybe very short dresses, depending on your point of view. They were cute enough, in their way. Quality construction, well made, handsome enough in their way. But every time I put one of them on and looked in the mirror, I wondered what on earth POSSESSED me to buy this? What? Herd instinct, that’s what.

There are three of us who like to go shopping together in an olde-towne shop in darkest Glendale. It is a cool little store in a vintage house. The owner has a killer eye for a certain type of clothing. We all like each other and have a great time. And we like the owner, because she’s quite a hoot, one of those gifted sales people who knows how to sell without seeming to be selling. Every time we go to this place, we all stumble out beneath the sheer weight of our purchases.

I bought each of these things there, probably during different outings. And here’s the problem: they have ruffles.

Ruffles are not my style. Decidedly not. In fact you could even say I hate ruffles. But for reasons unknown to personkind, I purchased not one but two garments with ruffled hems.

The only explanation is that we were resonating off each other so vibrantly that we would each buy anything the others said was “cute.” One vote for “cute” would be persuasive. Two votes: a clincher.

It was far from the first time this phenomenon has struck in my precincts. I used to hang out with a friend, now long gone, whose tastes were far snootier than this pair’s. She lowered herself to shop in Saks.

One time she and I were shopping for Eileen Fisher at the local Saks, and we hit a mother lode. Everything we tried on (we assured each other) was exceeding cute. Not a thread of it was on sale.

That day I bought four or five hundred dollars worth of clothes. Yeah, that’s true: !!!!!

I got the pile of rags home — and with Eileens, you can’t miss. Modeled them in front of the mirror for myself. Was impressed. Clearly my taste was impeccable.

Then looked at the receipt that fell out of the bag and thought…holy shit!

Five hundred bucks was about $450 beyond my clothing budget.

So, without ever mentioning it to Her Snootiness (I kid you not: this woman, while married to a guy who owned a Kentucky bluegrass race horse farm, used to go to fashion shows in New York and buy designer outfits directly off the runway), next day I packed up all those clothes and took ’em back to Saks.

To my amazement, the saleslady accepted the returns without batting a proverbial eyelash.

No way on God’s Green Earth would I have have bought all that stuff if I hadn’t been in the store competing to try on clothes with my then-friend.

See what I mean? Herd instinct.

It got better, that incident did. Two or three weeks later, I happened to be passing through Saks and noticed they were having one of their seasonal sales. Naturally I trot over to the designer racks (doesn’t everyone?) and start to paw through them.

What do I find but almost all the rags I’d brought back…marked down about 50 percent.

This time — in the absence of my resonating friend — I picked out the pieces that I really liked and that really looked good on me. Walked out of there with the best of the things she thought I’d purchased, at a fraction of the price.

Never told her that, of course. She thought I was walking around in a $500 wardrobe.

Is there a moral to the story?

Never shop in the company of friends.