Okay, so tomorrow is the first of July, which we hereby call the first day of a new budget cycle…even though, infuriatingly, credit-card billing cycles do not coincide with the first or last of a month. Couple of weeks ago, I came up with the idea of using Costco cash cards as metaphorical budget “envelopes” to help get a grip on my spending in those Elysian realms. And just a day ago, I also had the bright idea of using my credit-union checking and savings accounts as another type of “envelope” in which to organize the annual required minimum distribution (RMD) from the 401 K and the monthly Social Security income into categories:

Hm. Sounds plausible, doesn’t it? But…how will that work, in practice?

The RMD came in last week: a couple months early since I’m running out of cash. Forthwith, I transferred the tax-and-insurance set-aside — 8400 freaking bucks! — to savings, and I set up the checking account to automatically transfer Social Security deposits to another savings account, where the money (barring any immediate catastrophes) will accumulate to create an emergency fund.

This leaves a rather limited amount to live on over the next year: a little less than $1400 a month, about $365 less than average monthly 2018 spending.

That is going to represent a significant cut in spending. How to pull it off?

Come to me, come to meeee….

Well, the big challenge (IMHO) is Costco, lovingly known as Impulse Buy Hell. Even when I go in there with a list, I still come out with a bunch of junk (no, valuables!) I had no intention of buying. Consequently, a $300 tab is not unusual, and a cash-register bill in excess of $200 is pretty routine. To get a grip on this predicament, I had the idea of purchasing a cash card on the first of the month and using it to buy as much as it will bear, and then when it runs out…well…STOP buying at Costco for the rest of that month.

Two cash cards, actually: one for in-store shopping, and another, to the tune of about $60, for gasoline and propane.

But…how much to budget for Costco in-store spending?

Since I buy most of my groceries, all of my household goods, and much of my personal-care products at CC, $200 is probably not enough. On the other hand, presenting myself with a prepaid card for $300 may do nothing to resolve the diddle-it-all-away issue.

While studying this conundrum, I remembered the box into which I toss Costco receipts. Costco will take anything back and fork over a full refund. Often they’ll do so without a receipt (because, like Big Brother Himself, they have a detailed record of everything you’ve ever bought, and when), but it expedites things to have the receipt. Wouldn’t a fistful of these paper scraps contain a record of how much my various regular purchases cost? And with that in hand, wouldn’t I be able to calculate what any given shopping list of Costco items would cost?

Well… Yes. And yes! Rummage through a few months’ worth of yellowing receipts, and here’s what you come up with: 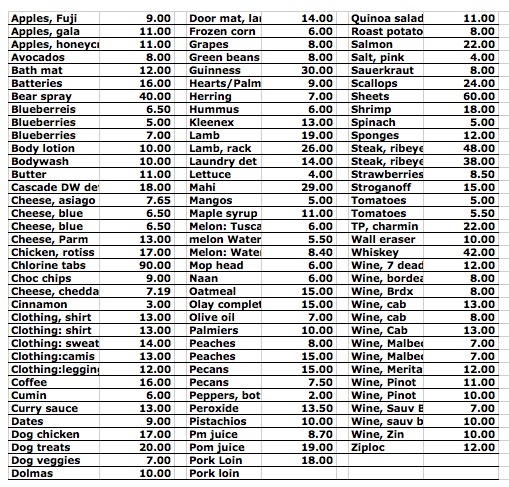 Now we have a clue to some of the things I buy all the time, some things I rarely buy, and a couple things I’ll never buy again (bear spray?). Some of these prices you can find at Costco’s website, but of course they don’t list produce prices (because they can’t, in any sane way, without updating pages about every day).

With this in my computer, now I can know about how much a given shopping list is going to cost! Woo-hoo!!

So. On Monday, when I intend to make a run on the Costco in outer Richistan, where they carry the fancy products I crave (you can’t get pomegranate juice at the Inner City Costco down the street, for example), I will have a clue: 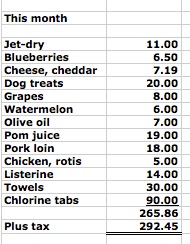 Tax is about 10% here. Not everything on the list is taxed at that rate; food is a little lower, but things are considered “food” in highly erratic ways. So it’s safest to assume all purchases will be taxed at 10% and then be pleasantly surprised.

I’m going to have to buy chlorine tablets for the pool, now that the water is getting tropically warm. Until recently the granulated stuff from Leslie’s was working fine (though it, too, is spectacularly expensive). But with summer definitively here, I need the tablets’ stabilizer to keep levels steady under the merry ultraviolet sunlight. At Costco, ninety bucks (plus 10% tax…) will buy you 40 pounds of the stuff. Leslie’s will sell you 35 pounds — some 12 percent less — for the same price, unless you want to fart around with finding a coupon and making an extra trip to an extra store to apply it.

My feeling about that: Hey, guys. If you think $72 (about what you can bring it down to) is a fair price for your product, then that’s the fair price, and I shouldn’t have to be jacked around with stupid coupon bullsh!t.

Truly. I do hate coupons. As I hate “membership” cards at grocery stores. Just charge everyone a fair price and quit the crap.

Where were we? Fifty pounds of chlorine tablets last exactly one year. (Hence, you could argue, if I’d had any sense I would have bought a bucket of the things when I ran out last winter, instead of stupidly waiting till the middle of the summer when the power bill is hovering in the stratosphere….) Thirty-five pounds will last less than a year, plus I’ll have to put up with marketing bullshit or let Leslie’s rip me off on the cost by about 12 percent. Conclusion: Buy the damn things at Costco.

That purchase will push this month’s bill to something around $290.

While the chlorine tablets are an “extraordinary” buy in the sense that the purchase will not appear on any other bill over the next 12 months, note that this month I’m not buying either beef (about $45 for a package) or fish (around $20 to $30, typically). Or shellfish (neither shrimp nor the beloved scallops). So in other months when I would not buy chlorine but would have to buy meat, that cost would keep the total right about where it is for this month.

That suggests that I should budget around $300 for in-store Costco purchases. At the end of a month, I reload the cash card to top it back up at $300 for the following month. So if, say, this month I really do spend only(!) $290 on food and household products, $10 should be left on the card come August 1. So next month I will only have to put $290 on the card.

Now, what about gasoline?

A glance at last month’s Visa bill shows that I spent only $30 on gasoline over the past month.

Freaking astonishing! Especially since if you’d asked me I’d’ve said I spend upwards of $60 a month on gas.

The car’s computer claims it can run another 51 miles, enough to get out to the coveted Paradise Valley Costco. As a practical matter, though, I think I will buy these cards and fill up with gas tomorrow at the Inner City Costco, which is closer to my house and whose gas prices are usually lower. Then I’ll drive to the store in PV or up in Whiteyville, where I can get the upscale products I crave and walk across the parking lot in reasonable safety.

Why did I spend so little on gas last month? Several reasons:

One or two doctor’s appointments will cause the car to soak up a fair amount more than thirty bucks worth of gas. Same would happen if I chose to drive to My Sister’s Closet or Nordstrom’s Rack in Scottsdale to shop for clothes — unlikely, but both those establishments display the best of their products in Inner Richistan. There’s hardly any point in going to either of those stores at their uptown Phoenix locations.

So I’m thinking it would be best to put $60 on the gas card. And the same will apply: if I don’t spend that much, it won’t take as many dollars the following month to top it back up.

Setting a rule that I have to quit buying when one of these cards runs out will at least stop me from spending more than $360 a month at Costco. I may just run over to Safeway to buy whatever the CC budget cannot sustain. But…maybe not. If a purchase isn’t urgent, I may just defer it to the following month.

And since the bulk of my buying occurs at Costco, that should help to keep 2018/19 spending under control.