Hallelujah! We are now DONE with this semester. I am ready to post grades, which I will do whenever I finish scribbling here and swilling down another cup of coffee.

Actually, one maga-writer has yet to post the final, tiny assignment for the magazine writing course. It’s not due until midnight, but it doesn’t much matter. She has managed to rack up a semester average of 98.3%, and so she’ll get an A in the course whether or not she gets around to filing the last little article.

It sure has been a semester for peculiar ones. One of them, an African student, turned in a SECOND collection of plagiarism for the huge, heavily weighted final freshman comp research paper. This time it looks like she took a fair amount of time trying to put the thing together. I’d like to think it’s a cultural issue: in some parts of the world, copying stuff whole cloth is actually regarded as a sign of respect and admiration. Hadn’t heard that was true in Africa, but the term “non-Western” is frequently bandied about.

But much as I try to squeeze some Benefit of the Doubt Elixir from my flinty heart, the fact that for an earlier paper she kiped a student-level essay out of a composition textbook published online, pasted it into a Word document, and then REPLACED THE CHARACTERS’ NAMES IN IT with her own and an acquaintance’s seems to indicate calculated dishonesty. That’s different from pasting a few sentences out of a source… But also to my mind the fact that she lists none of her final paper’s real sources in her Works Cited also indicates that she knows not to present the stuff as her own work — she’s trying to hide the sources of her plagiarism. If she’d cited them in her bibliography, I might have thought she just didn’t understand how to use sources…but the fact that she conceals them is just too telling.

Another African classmate, a guy who I think comes from central Africa, never did figure out what a position paper is. Since the final paper was a long, fully sourced and documented position paper, this formed a bit of a stumbling block, especially since he has yet to understand the fine points of citation and documentation.

But heaven help us, I can’t imagine trying to take a college-level course in Yoruba or some such. So you have to admire these people’s courage and persistence.

Meanwhile, over in the maga-writing section we have a gent who marches to his own drummer. He at least is going to pass this semester, which will get him out of my hair once and for all, thank Gawd. This is his second try — he just turned all of last semester’s papers back in, unrevised and unedited. As I recall, last spring he missed a couple of assignments, which did not help his semester average. But he’ll pass this time.

There’s a great deal to be said for the arms-length of an online course. I’d be tearing my hair out if I had to deal with these characters in person two or three times a week!

I’ve uploaded the material for the two Spring 2015 sections of 102, so those will be ready to go in January, at the push of a button. In another couple of days I’ll have the magazine-writing course ready to go in Canvas, so all the course prep will be done before I have to go into the hospital to get my boobs chopped off.

Also added a separate rubric for focus: “overall focus is clear and stays on point throughout the document.” Ugh. Wouldn’t you think

Well. No. It does not. Sometimes you really do need to say “this paper wanders all over the damn place.”

Y’know what I hope? I hope it’s really true that by the time you get eight books up on Amazon, your little emanations start to make a living wage. We will be in a position to test that thesis by the end of 2015.

For that to happen, each book would have to gross $1800 per year, significantly less than one section pays. That would only be $150 a month.

I’ll betcha I can average that amount. The adjunct book may never return that much. But a diet book is bound to sell — at net of  $8/book, that’s only 19 copies a month. I think the novel is pretty lively stuff, and if I get a series going, it’s likely each volume would sell 19 or 20 copies a month.

And I intend to write a book about the boob misadventures: any sort of self-help book/memoir having to do with breast cancer(oid) is going to sell, if for no other reason than the general hysteria surrounding the subject. That one comes on top of the eight books already planned, so if I can squeeze it into 2015, in a year I’ll have nine books on Amazon and waypoints.

If Amazon will crank 14 grand a year, reliably, from a steady stream of self-publications, I will never teach another composition course as long as I live.

w00t! My first foray into self-publishing is LAUNCHED! Slave Labor: The New Story of American Higher Education went live on Amazon Saturday afternoon. I don’t expect to make much money on the thing — in fact, this is a test-drive down the self-publishing highway. We’re told a self-publishing author starts to generate an income after putting about eight books out there.

How do you like the cover design? That was done by my friend James Metcalf, a veteran of many a magazine issue and many an advertising campaign.

The physical e-book itself was created by the excellent Ken Johnson, a high-school teacher who reinvented himself as an IT tech of considerable skill and then reinvented himself again as Your eBook Builder. Copyediting was done by the redoubtable Tina Minchella, my business partner at The Copyeditor’s Desk. So…hm. When you come right down to it, all I did on this thing was the easy part: writing it.

Self-publishing gives this ole lady the heebie-jeebies, because when I came up, only people who couldn’t write anything good enough to faze past an acquisitions editor paid someone else to publish their golden words, which too often were gilded in a thin layer of pyrite. My books have been published through mainline publishers: William Morrow, Columbia University Press, Folger Shakespeare Library. 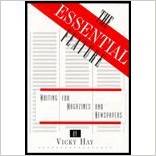 But today the situation seems to have changed. Despite vast haystacks of chaff, quite a few decent writers are publishing on Amazon, iBooks, and Nook. Most of these are nonfiction writers — it’s just not that hard to write a decent piece of nonfiction, and occasionally you hit on an inspired idea that really does contribute something to the Greater Good or, if not, will provide real help or understanding to some specific group of readers.

Apparently some lively, decently written fiction is e-published, at least in the genre fiction categories. Friends who read this stuff tell me they find memorable and engaging novels self-published at Amazon. This is good. Very good. 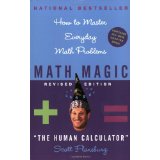 Further to the point, it appears that in the Amazon environment much more money is to be made off a modestly successful book than one could expect from a mainstream publisher. The split with Amazon is as nothing compared to the proportion of gross sales that goes to a major publishing house. The books you see to the left here paid me 10% royalties. At Amazon, the situation is almost reversed: under most circumstances the author collects the lion’s share of gross sales. And neither the publisher nor the author has to split income from sales with a bookstore.

One cannot expect to get rich publishing on Amazon (although some do exactly that). On the other hand, precious few of us make much by publishing through traditional publishing houses. The Essential Feature has mad

e several thousand dollars…since 1990. It still makes one or two hundred bucks a year. How many lattes would that buy? Anybody?

I did make enough on Math Magic to pay off the mortgage on my home. But that was because Flansburg, who contracted me to write the book, had already made himself a media phenomenon. And as for The Life of Robert Sidney? It went a long way toward landing me a full-time academic job: $43,000 to $65,000/year, over a fifteen-year period.

So, I suppose you could say the book that paid me the least ultimately earned me the most. 😉 Most of us don’t expect to get rich off a given publication, but do hope to leverage the thing in ways that are not obvious to the general reader.

Anyway, this is going to be an interesting experiment. I can crank books almost as easily as I can crank blog posts, which as you see I do almost as easily as…well, breathing. So if it’s true that after you reach a certain critical mass (some say five books; some say eight), you begin to earn enough to pass as middle-class, that will be very pleasing.

If it’s not, tant pis. I’m a writer. What I do is write. If no one reads it, that’s very much like no one hearing a mockingbird sing. Doesn’t change the mockingbird’s song.