After the latest Cleaning Lady visit, I discovered my favorite old (very old) nail brush has gone missing. I must have put it in some not-routine place, but having searched every drawer, shelf, cabinet, and countertop in the house and the garage, I’m afraid it’s time to declare it lost. And that is not a good thing.

It’s almost impossible to buy a decent nail brush anymore. They used to be in every corner drugstore, and now: gone! At one point I bought an expensive brush at L’Occitane — sweetly appealing with its wooden handle and its “natural” bristles. And sweetly useless. The bristles are so soft that none of them will get under your nails to scrub the dirt off. And whose idea was it to make something that sits in water out of wood?

So it was off to Amazon, that purveyor of so much Stuff You Can’t Get Anymore. Apparently my perception that decent nail brushes no longer exist is just about right on target. Heee! Check out the one-star reviews of the one made by Fuller! And the Rubbermaid nail brush that rusts!

Contemplating this dismal state of affairs, it occurs to me that there’s an awful LOT of Stuff You Can’t Get Anymore. Videlicet, exempli gratia:

• Public phones
• Information operators
• A human being on the other end of virtually any phone call
• Zebco’s Rhino Reel (well, there are 16 left at Amazon, actually…but try to find it at your local Sportsman’s Warehouse)
• A decent bra
• Pyrex that’s undeniably safe to use
• Real Eskimo Pies
• Mounds Bars that are big enough to matter
• Decent sheets that don’t fall apart within three months and don’t break the bank
• A washing machine that works and doesn’t make braids with your clothes
• Pump jockeys (except in states where self-serve gasoline is outlawed)
• Ice picks
• Functional showerheads
• Wind-up alarm clocks
• 4711
• Wind Song
• Mentholatum (you can still order it on Amazon, but it, like Vaseline, is now made in China and so not something you’d want to put around your chapped lips and nose)
• Privacy
• Public civility

LOL! What Stuff do you find you can’t get anymore? 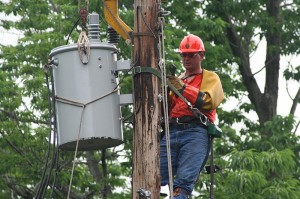 The electrician and his sidekick were here this morning to install a few outlets at hip height, so I don’t have to crawl painfully on the floor to plug in a vacuum cleaner, a laptop, or a heating pad.

This guy, Dave, has been the electrician of choice for the past 30 years, so we’ve become casual friends. We’re both beginning to enjoy the vicissitudes of old age — he more than me, I’m sure, since he does a lot of physical work. While the two men were working, I was fiddling with installing a new battery-run doorbell (one of the previous Happy Handyman homeowners took out the hard-wired doorbell!), and I remarked that compared with the one I put in eight or ten years ago, it’s a piece of junk. That, of course, kicked off the Going-to-Hell-on-a-Handcart conversation.

Dave remarked that he feels unhappy in the 21st century, because so many changes keep coming so fast. He doesn’t like either the changes or the pace of change.

I said, well, if you’ll recall that’s exactly what our parents said when they got to be our age.

He said, that’s true. But there was a difference between 20th-century change and 21st-century change. In the 20th century, the changes put people to work: people had jobs. The opposite is happening now. Fewer and fewer people have jobs, and those who do don’t have very good jobs. Then he clucked about the stupidity of sending all the decent jobs offshore — and the harm it’s doing to America.

One thing that’s good about having a trade, I said, is that they can’t offshore electrical installation.

That’s true, he said. But the problem is, when people don’t have decent-paying jobs, they can’t afford to have maintenance work and improvements, like installing outlets where you can reach them, done right. So they either don’t do them, or they just jury-rig things to try to keep them going as long as possible.

You’ve been in Mexico, he continued. You’ve seen how the construction and infrastructure are thrown together, just enough to hold it up for a few days. That’s because nobody can afford the material or the skilled labor to do a proper job. They toss things up, they patch things together just so they’ll last until tomorrow. When tomorrow comes, they’ll figure out what to do then.

Well, that kind of thing is happening here more and more. When repairs need to be done, they either don’t get done or they don’t get done right, because people can’t afford to hire an electrician or a plumber. They’re just not earning enough.

I think I’ve talked before about the Third-Worldization of America. As Dave said in passing, the only people who benefit from the changes we’re seeing today are the very wealthy and the upper-level, extravagantly paid executives of huge corporations.

Listen to the workingmen. They’re the people who are on the ground, trying to make a living with American jobs — you could say they’re the canaries in the mine. And in my opinion, they have a clearer, truer view of the health of our country’s economy than does any theoretician in academe or any politician in Washington.

What they have to say will curl your hair.

This post was included in the Carnival of Wealth at the feisty iconoclast Greg MacFarlane’s site, Control Your Cash. Thanks, Greg! 😉

Good grief. Did you see this morning’s news? Hundreds of thousands of people are banned from using their tap water, thanks to an industrial chemical spill into the Elk River, which flows through Charleston!

Ever been in Charleston? It’s a real city with a real economy, which has now skidded to the proverbial screeching halt. Restaurants are closed, hotel customers are canceling, schools have shut down, and people are having to stand in line upwards of an hour to get trucked-in water.

An interesting page from a technical site offers some insight into just how toxic this fine substance is. Under “Safety Information,” click on the links next to “Risk statements” and “Safety statements”; in the sections that come up, navigate to the numbers shown in those live links in “risk” and “safety” statements. Holy mackerel! Irritating to eyes, skin, respiratory system…and “safety statements”? There’s twelve of them.

This is not some far-fetched terrorist attack. It’s not an unlikely natural disaster like a tornado or a brushfire ripping its way through the downtown of a major city. It’s just the cost (to the citizenry…that would be the likes of you and me) of doing business in an unregulated or laxly regulated economy. Hey…what are a few sick kids when there’s billions of bucks to be made?

The perp does business as “Freedom Industries.” Heh…no joke! Wave that flag.

It’s a good reason to have a couple of carboys full of water on hand at all times. And it reminds me that mine is getting mighty old — time to pour it on the plants, rinse out the containers, and refill the things.

By extension, I think it’s also a reminder to always have an extra tank of propane, which you can use for cooking if the power or gas goes out. Just refilled one yesterday, having noticed that the tank in the BBQ is running low. I keep three propane bottles on hand, but in my recent spate of a) incapacity and b) bone-laziness, I failed to refill two of them and have let one come close to running out. I’d better take the other one over to U-Haul later today and get that thing topped off.

Water, propane, and at least a few stores of canned foods and dry staples such as rice, beans, and flour: Don’t get caught without ’em!

Let’s start with something truly wonderful: Kimisho Ishizaka’s amazing open-source Goldberg Variations. You can hear this exquisite music of Bach, download and follow along in the scores(!), and even listen on your favorite mobile devices…all for free.

Moving on to the Annals of the Floored and Flabbergasted, I’m sure you read about the replicator hamburger science is trying to foist on us. Yuch. If I hadn’t already adopted the “less meat but much better meat” scheme, this one would have done the trick. The day the butcher counter starts peddling fake meat is the day I turn into a vegan. If you didn’t already have some doubts about the fake food and the chemical-laced setting in which it is served up to us, contemplate the fact that animals in the wild, domesticated animals, and lab animals in strictly controlled environments are getting fatter and fatter, just like us.

Then we have this: if you haven’t read it, you should. And while enjoying that tour de force of investigative journalism, bear something in mind: when someone else’s rights are violated, so are yours. What we see there is an unjust law — if not unconstitutional then certainly in direct contravention of the spirit of the U.S. Constitution — taken to its natural end by blatant official corruption.

Also in the Department of Unconstitutionality, we have the news that not one but two e-mail encrypting services have been shut down, one of them apparently as a direct result of secret government action and the other because its management is flat-out scared sh!tless. Big Brother is determined to read over your shoulder, whether you like it or not.

Ve haff vays of making you show us your mail…

And, my dears, if you’re not scared sh!tless, too, you have the nerves of an old oak fencepost.

While you’re contemplating these things, consider the actions of a man whose actions in the office to which we elected him directly contradict what he promised to do while he was talking us into voting for hm.

And speaking of the frightful aspects of America’s Brave New World, we see that someone somewhere would like to take some action to improve mental health care in this country, given the number of unhappy souls who have taken to the streets, the cinemas, and the schools with heavy armaments. Sounds hopeful, doesn’t it?

But what, really, does it mean? Given the state of organizations, private as well as public, that institutionalize the vulnerable, what really will be the outcome of this? Maybe a new rug under which to sweep sick people? How much hope do you hold out that we’ll do a decent job of reforming mental health care?

Along those lines, we have this little bit of double-think, which would be hilarious if it weren’t so effing gut-wrenching.

The other day, George, my favorite curmudgeon, posted a comment in which he first alluded to and then installed all the lyrics of a Country Joe McDonald song. Make no mistake about it, my friends: if anyone can save what little remains of this republic and its storied freedoms, it will be the curmudgeons, the sinkers of heels into the sand, the angry, and the vocal.

And so, a toast to George and all the curmudgeons of America: keep on truckin’!