What a lot of critter terror has been going on here in the ’hood! Or rather, at large: it’s all over the Valley.

A Facebook friend found this little guy inside her house: 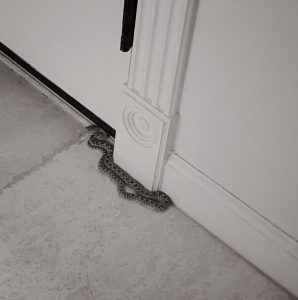 She asked if it was a rattlesnake, or…what?

FB Friend 1: Not in your house, I hope!
FB Friend 2: A scary looking snake!
FB Friend 3: Not to freak you out, [Friend], but I’m 80% sure that’s a snake.
OP: Yes. In my house. Some sort of rattlesnake, I think. It ‘had’ a triangular head and fangs. Very menacing attitude. I chased him out the front door. Having terrible aim, it now rests in peace in several pieces in the courtyard flower bed.
FB Friend 4: The shape of the head is a triangle so I’m glad he’s gone!
FB Friend 5: OMG! I would be in my car with doors locked, calling 911.
FB Friend 1: I am happy to know he is now in pieces.
FB Friend 6: May he rest in pieces.
FB friend 7: It’s a snake! ahhhhh!!
FB Friend 8: Got inside the house, did he? Are you sure it had rattles? Snakes by their nature have fangs, much as humans have molars and eye teeth.
FB Friend 9: Oh, no, [Friend]!!!! Do you leave your doors open?
FB Friend 10: I would guess a rattlesnake.
FB Friend 11: I hope it doesn’t have friends.
FB Friend 12: WonderWoman! Now I know who to call when I am in danger!
FB Friend 13: Way to go Annie Oakley!!!!
FB Friend 14: That’s scary.
FB Friend 15: Omg. Do we like snakes. Egads.
FB Friend 16: WHAT???? Why is it that I didn’t know about this? You are amazing.
OP: Turns out it was a gopher snake. A very aggressive gopher snake. I take no snake prisoners.

Yeah. All that hysteria over one harmless gopher snake. And, we might add, because of the hysteria, one fewer gopher snake to clear the OP’s property of gophers, moles, and roof rats.

It’s interesting that humans seem to be instinctively afraid of snakes, isn’t it? There have been some studies that suggest this discomfort is innate. Too bad…the critter was called a “gopher snake” for a reason: it eats gophers and other rodents. Around here, “other rodents” include roof rats, which are taking over the city. And given the disease rats carry, the damage they do to your home and vehicles, and the cost and poisonous risk of exterminating them, any day I’d druther have a gopher snake around than those critters.

So what is the appropriate response to a snake in your house?

Nothing. Leave it alone. Open the door so it can get out, and it will go out. Do not go get a shovel and chop it up into pieces. That is just plain hysterical, and — apologies to OP and her hysterical friends — stupid.

If it had been a rattlesnake, messing with it would have been stupid: she risked being bitten. It having been a gopher snake, killing it was stupid. She now can deal with gophers excavating her garden and rats cavorting in the attic all by her little self.

Friends of mine who were much more acclimated to the desert lived in an expensive house that backed onto a dry wash in Scottsdale. The wash was more or less natural desert habitat, as much as could be said in an area that had been largely bladed and built up with human habitations. Javelina and coyotes would trot up and down this little thoroughfare all the time. One day man and wife walked out into the garage and found a large, healthy rattlesnake loafing there.

They left it alone.

Couple hours later, it was gone. It never came back. They stopped leaving the garage door open so that it could get in and checked weatherstripping around all the exterior doors to be sure no room was left along the sills for a very slender guest to slip through.

Snakes don’t want to be in your house any more than you want them in your house. Sometimes they will err and find themselves where they do not want to be. When they realize their mistake, they’ll leave.

What is the appropriate response to snakes living outdoors near where some developer has ripped up the desert and built your house?

Well, the best response would have been for you and your neighbors not to have bought the houses in the first place, thereby discouraging greedy developers from ripping up the desert. But since what’s done is done… The next-best response is to encourage raptors such as hawks and large owls to nest and hunt in the neighborhood. A hawk, an eagle, or an owl can and will kill a snake. Pleased to do the job for you, ma’am, and no, there’ll be no fee for that. Well, except I’d kind of like to have that cat of yours for dessert! 😉 Keep your kittycat indoors.

Meanwhile, a like degree of hysteria is going on at NextDoor, the social networking platform for neighbors. Hereabouts, my friends and neighbors are working themselves into a tizzy because a few people have (belatedly…very belatedly) noticed that ohhh eeeeeek!!!! Coyotes live here!

People let their cats run loose around the neighborhood and then are dismayed when they’re “disappeared” by the local wildlife. Others are horrified because some people like to fill their yards with rather feral vegetation. {sigh} If you want every yard to look like a Dutch tulip garden, unfortunately you’ll have to move into an HOA.

Neighbor 1: Two houses east of FancyDan Lane and Lesser Feeder Street NS, grouses one neighbor, the house behind ours, north of us, is a double deep lot that faces Lesser Feeder. The coyotes are bedding down at night along the backside of our fence on the neighbors property in their bushes. I too have two small dogs and am concerned. I have thought about scaring them off with a b.b. gun. We are relatively new to AZ so don’t know what the laws say regarding what we can and can’t do?

Neighbor 2: If you have neighbors allowing rats, feral cats, coyotes to “bed down” and thrive, then wouldn’t you take that up with the neighbors? I saw one head into an overgrown yard on Lawrence and 11th. It simply disappeared. A coyote. Not a neighbor. BTW that yard has been that way for over 50 years. Coyote problem for much less than that.

Crabby Old Desert Rat: @Neighbor 2: Common sense, alas, does not prevail in real life. You can take up the stray cat problem with your kitty-loving neighbors until you’re blue in the face, but they will not stop letting their cats run loose to predate on the birds and to make a mess out of your yard. You can ask your neighbor to clean up the jungle in his yard — good luck with that! You can beg your neighbors to PLEASE not leave cat food and dog food out in their yards and their driveways…har har!!! Even in a homeowner’s association, many of these common-sense suggestions fail to win out — one of my best friends lives in a lovely HOA and has had problems with the neighbor’s hordes of stray cats for years. Letting your animals run loose violates that HOA’s rules, but the HOA refuses to do anything about it, and in fact, the cat lovers banded together to take over the board so they could insure they would be able to let their cats run around everyone else’s yards.

And how does anyone “allow” rats to move in? This is not an “allow” thing. The rats are here thanks to global trading — they came in on the produce we import — and they ain’t a-goin’ away anytime soon. Hence: another common sense suggestion. LEAVE THE COYOTES ALONE. They will take care of the vermin, of which we have altogether too much these days. Folks who do not consider cats to be vermin eventually will learn to keep them indoors. Those who care about their small dogs will not leave them in the backyard to yap or let them run around the park and the streets off-leash. Frankly, I’d rather have the coyotes than the vermin and the pets allowed to become pests. 😉