So I’m sitting here contemplating the dermatologist’s orders (rather standard, but in these parts standardly ignored) that every square inch of skin must be covered up when one is out of doors.

Well, in a country where most women decline to wear burqas, that’s really not very practical advice… Oh well. Then I remembered: the chambray shirt!

Whoa! Literally… Back in the day, when we had a ranch and I used to ride a horse around the boondocks at every possible chance — which was usually a couple times a week — Phoenix used to host a store called Yellow Front. An odd emporium, it had features of a general store, a Sportsman’s Warehouse, and a blue-collar worker’s supply. I bought a pair of saddlebags for Babe there — very handy! And jeans and bandannas and fishing gear and a felt-covered canteen and…all sorts of cool stuff.

Among the cool things you could get there were men’s blue chambray work shirts. They were cotton plus some kind of synthetic, as I recall — so you didn’t have to iron the damn things, the way you had to iron your daddy’s khaki shirts once a week. And they were the bidness! Loose-fitting even in the smallest men’s size (which was the only size that would even remotely fit a 120-pound woman), they let air flow all around you (if you left the tails untucked) and so, much like an Arab’s white robes, would keep you cool on a warm day by blocking the direct sun while creating a kind of natural air-conditioning. 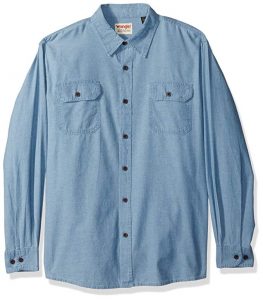 Yellow Front, like all things American and Good, is long gone, of course. In the past I’ve looked for the things at hopeless joints like Target and Walmart and found them…disappeared. Hmmm… chambray chAMbray chAMAZONbray! Why the hell not?

Off to the Web! Look it up, and lo! Wrangler still makes them!!! And Amazon has got them!

Order one up. Late this morning, stroll out to the front courtyard to imbibe the remains of the day’s coffee, and lo! There’s a package from Amazon. Grab. Rip open. And lo! There’s a good old chambray shirt.

This one’s fabric is a little heavier gauge than the ones I recall. It’s 100% cotton. And instead of being made somewhere in New England or the Midwest, it’s fabriqué in Bangladesh, which is too bad. Shame on Wrangler! Still…at least they’re still making them and still shipping them to…Amazon. Yeah.

And the “small” size does still fit. A little long in the arms, which as I recall was the case with the original. I used to roll up the sleeves, aping a handsome young man whose style I admired. For an old lady’s purposes, though, this is…umh, handy, because when left to their own whim, the cuffs slide down past your wrists and cover about half the back of your hand, thereby protecting the supposedly precancerous area from the dreaded sun.

This kind of shirt makes a great lounge-around-the-house cover-up when the weather’s cold, too. I don’t run the heat in the winter — saving the power then makes it marginally affordable to run the air conditioning in the summertime. So what’s needed here at the Funny Farm is something to keep off the chill that can be run through the washer and is not too fancy to wear while gardening and cleaning the pool and scrubbing down the kitchen and is sturdy enough to hold up to said activities. For the summer: all of the above, except substitute “keep off the sun” for the first desideratum.

Heh. Wrangler. I used to wear Wranglers jeans. That was SO outré! Lawyers’ wives did not wear Wranglers. No, nooo, dear, it was just not done! At the worst, you could wear Levis, but even that…tsk tsk. If it cost less than $50, it was just…no.

Well, being the sassy little broad that I was, of course I wore Wranglers, because the things fit. Levis do not fit a 120-pound woman with a 130-pound rear-end. 😀 Do not now, did not then, never will. Wranglers would fit real women, and they fit women who were given to riding horses. Not only could you breathe in the things, you could swing your leg up over a saddle and push yourself clear of a horse that was going down or trying to throw you. Not only did I wear the things, I wore them to teach in graduate school. So there!

Think I’ll order up a few more of these fine garments. Now…if only I could get ahold of another mare…