…to get wherever you’re going by riding Ol’ Paint. Whatever hay costs, it can’t be as much as gasoline!

No kidding: yesterday morning on the way to a dermatologist’s appointment, I darted into the new QT gas station that they stuck on the site where a landmark old gringo-Mexican restaurant had stood for many a year. The cheapest gas on offer was $2.95 a gallon!!

Augh! Makes driving all the way across the city to fill up at a Costco begin to make sense.

Had to buy gas because the junket to the dermatologist’s office is endless — halfway to freakin’ Yuma. There IS a Costco on the route home — marketing to business customers, not us hoi polloi — and it does have a gas station. Fortunately, I have a business membership. But…wasn’t absolutely sure I could make it all the way to hellandgone to Avondale and then about 2/3 of the way back into Phoenix on the amount of gas still in the tank. And believe me: you do NOT wanna be stuck in lovely Maryvale, hands-down the most threatening slum in the state.

Anyhow, the car is now stocked with a tank of low-test, which should suffice for another two or three weeks.

Think o’that: your basic three bucks a gallon for the lowest-octane stuff.

Eighty bucks to replace the CO/smoke detector that gave up the ghost. That was ducky, too.

No wonder i imagine i should have recourse to psychedelic drugs….arrrghhhh!

Speaking of the which, I found a peddler closer to home!

This joint (heh!) is right across the freeway, in a defunct shopping center. But that notwithstanding, heaven help us: the place delivers! Woo hoo! I’ve arrived in Junkie Nirvana!

Flew in through the doctor’s door as the clock rang 1 p.m.  My God what a horror show it is, driving in this freaking city! On the way out, as is not uncommon in Our Fine City, we all wound our way past a crash in a major intersection: two vehicles utterly totaled.

Red lights, you understand, do not apply to Arizona drivers. 😉

Derm didn’t seem to think the new lesions were anything to worry about. Froze them off. Et voilà: half the day blown away! Ain’t that ducky…Ain’t old age grand?

On the way back, I went into Metrocenter, where the cannabis dispensary mentioned above supposedly resides. Nary a sign of it. Turns out — I discovered after I got home and called to ask where they are — that they’re not IN Metrocenter: they’re on an outer fringe road ringing Metrocenter, next to the old Discount Tire.

Was that a strange experience! 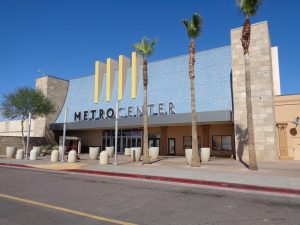 Metrocenter is a ghost shopping center — a huge one. If I recall correctly, when it was built it was the largest enclosed mall in the country. That record didn’t stand long, of course…but still…it is a huge structure with dozens and dozens of stores and several large anchor tenants — Sears and Penney’s and Diamond’s (Dillard’s) and Goldwater’s and The Broadway. Two storeys, an ice-skating rink, a movie theater — it was quite a big deal. And it was a vibrant place: everybody went there to shop and to socialize. Now it’s just vacant, except for a bloated Walmart store.

It was kinda creepy to drive around in there. And sad. I wish they’d tear it down and build some other development in its place.

They’re going to run the light-rail boondoggle into the now mostly vacant parking lot, where presumably the bums will be made to get off…that being the future new end of the line. Said train riders come into our neighborhood to loaf and steal because the end of the line is now at the intersection of Conduit of Blight Blvd. and Gangbanger’s Way. If the bums are allowed to ride another few miles — across the freeway and into Metrocenter — then of course they’ll all swarm into the neighborhoods over there and lurk around the businesses in that area.

Once you’re in the area west of the I-17, you’re in a vast sprawl long neglected and indeed reviled by our City Parents, most of whom hail from affluent parts of town…far far away from the Great Unwashed of the West Side. Our August Leaders do not care about the property values and the well-being of the po’ folk who live west of Conduit of Blight…those tracts form a kind of a dust-bin for more affluent parts of the city. So I expect the bums will be given free run of the whole area.

If that’s what they’re going to do, then it would make sense to convert the vast, empty mall into housing, treatment facilities, and care for the homeless. The mall would be perfect for the purpose: dozens and dozens of little stores that could easily be converted into SROs; a built-in chow line; large spaces to use for meetings, job training, drug dry-out, or church proselytization; and office space to house social workers, psychologists, and cops. It’s the stupidest thing…why do city governments never seem to do obvious things that make obvious sense?

Ohhh well. When I got back into the ’Hood, some kind of weirdness was going on. On the east end of the alley, someone had left a vehicle in the middle of the street, midway between my house and the house behind me. No one was around. No one seemed to be in the alley. The car was just sitting there in the road. Cop helicopters were just arriving on the scene, buzzing the neighborhood in general.

Called the dog to the garage door, grabbed a shilelagh, walked through and inspected the house — no sign of entry. Chatted with WonderAccountant: she agreed that the car in the middle of the road was odd, but had seen nothing else out of the ordinary.

Eventually some guy came out of a house across the street, jumped in the oddly parked car, and trundled off.

5 thoughts on “Cheaper by far…”