Wow! What a fantastic day! 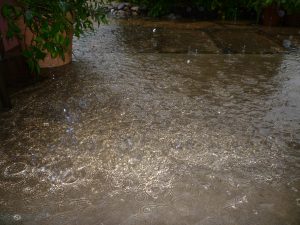 It’s been raining since about 8:30 this morning. Temps in the 70s. Naturally, I’d put off driving up to 2nd Opinion Vet’s office to pick up the doxycycline she wants to inflict on poor old Cassie’s urinary tract infection. So I had to shoot up there under darkening skies. Darted in, grabbed the pills, ran back out, jumped in the car…and the skies opened!

Along came a downpour like the great old rainstorms we used to get back in the day, before Arizona was destroyed by development and too damn many people, parking lots, buildings, and machines. Yeah: the kind of rain where you can barely make out the road in front of you. 🙂

Without the fiberglass cover over the back porch, rain sluices right down onto the pavement, which tends to turn into a lake. But interestingly, despite a LOT of rainfall, water did not come up to the back doors’ threshholds. Apparently when the cover was there, it channeled so much water to the rocks off the back patio (submerged in this picture) that the French well and rock “river” couldn’t handle it. If the amount that fell today couldn’t flood that patio up to the level of the back door, presumably the back door and slider are pretty safe from water damage.

Got home without incident, mostly because there weren’t many people on the road early on a Saturday morning. It’s now 3:30 and the rain has just let up. The local play-nooz is reporting that October is now the 2nd wettest month on record (right! I’ll believe that when pigs fly). Whatever: the pool is now filled to the coping. Another few inches of rain and it will overflow. I probably need to open the valve on the filter to let some of that water out, but truth to tell, I have no idea what will happen when I do. So…discretion being the better part…

How do you like this little toadstool that popped up in the rain? Cute little guy, ain’t he? 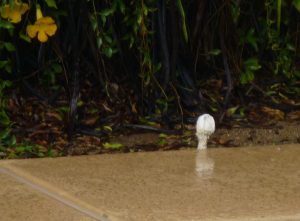 Finished another two sections of the present client’s annual promotion & tenure paperwork. Ohhh dear God, am I ever glad not to be in the academy anymore! Crazy-making. And this woman: she’s like some sort of nuclear engine. A real powerhouse! When you look at what she’s been doing, you wonder when she has time to breathe at all, much less have a life.

Cassie is enjoying doggy moments when she seems MUCH better. This morning she was just about back to her old bright-eyed, yappy self. Never thought a dog’s barking would be a welcome sound! She does have her ups and downs, though. Right now she’s doping off on the bed again. The vet said the doxycycline could have some unpleasant side effects, but so far…so good. But of course, she’s only swallowed one of them.

She’s still unduly thirsty and still peeing gallons, but no longer on the floor. She can make it outside, and she doesn’t have to pee every 20 minutes. Thirst and frequent, copious urination are symptoms of Cushing’s disease — i.e., something wrong with the adrenal glands. BUT…they’re also side effects of Benadryl, with which I’ve been dosing her copiously. It seems to have helped the cough significantly, although the cough and wheeze have not gone completely away. And they’re side effects of prednisone, of which I suspect she was given too much. She’s much better…but lifting her off the bed presents a problem in the breathing department: the weight of her chest on my arms as I lift her down apparently sets off a coughing/wheezing spree. So…yeah…there’s something wrong there.

Coughing, though, seems not to be a sign of Cushing’s. We shall find out, sooner or later.

2nd Opinion Vet made a few remarks that were unwittingly revealing… She said that one of those ultrasound scans costs $450 to $500 — this was said in the context of her mild surprise when I said I couldn’t afford to spend vast amounts of money trying to keep a 12- or 13-year-old dog alive. When I told her that MarvelVet had comped the ultrasound, she was startled.

Now, he may have done that out of the Goodness of His Heart. He is a very nice man, after all. So it seems. But…I’ve begun to suspect that he thinks he misdiagnosed the supposed Valley Fever and in doing so gave her two drugs that he shouldn’t have given her. Either one would have made her very sick. The fluconazole, as we’ve seen, damn near killed her. The Temaril-P probably was responsible for the incontinence, explaining why that phenomenon is going away now that the Temaril has about worn off. He probably figures he practiced mal, and he’d better find some way to make up for it. Or to cover it with a convenient other ailment.

And lo! there is an other ailment, all right: 2nd Opinion Vet finally got a copy of the ultrasound — days after requesting it — and she said there indeed is a mass on one of the adrenal glands, but it’s impossible to tell what kind of mass it is. She uses the term “Cushing tumor,” which doesn’t seem to be standard — at least, I’m not finding it. At any rate, there’s a 50/50 chance the tumor is benign. The only way you can know is to take it out and biopsy it.

I can’t afford $1000 to operate on a dog that’s this close to the end of her normal life span. That sounds awfully cold…but it’s a fact of life. I don’t have thousands and thousands of dollars to spend on a pet…and if that’s what’s involved in taking in a pet, then obviously I can’t afford to have a pet.

A urinary tract infection is among several signs of Cushing’s disease, the effect of a tumor on an adrenal gland, and so if the tumor is non-benign,  she may  never go back to normal. But…it’s worth knowing that Cushing’s can also be caused by over-administration of steroids — of which prednisone is one. And we did give her two rounds of that stuff. Often iatrogenic Cushing’s clears up after you quit dosing the dog…although the stuff can do permanent damage. Gee, doc…thank you so much for telling me that [not!]. Do I have to look up every goddamn thing for myself?

2OV was also startled when I told her MarvelVet said her UTI was so minor as to be insignificant and did not need treatment. She said the numbers were about as high as they can get. Which would explain why the poor dog was peeing out undiluted blood. I gave the stuff to Ruby, who came to me from the breeder with a UTI, and she had no problem. This dog is agèd and has been very sick, indeed, and so we could see some side effects. But we won’t know until we try it. If it works, though, she may be OK. Also, if the cough is from a bacterial infection, the doxycycline may help with that. Which brings us to another gripe: MarvelVet has not sent the purported X-ray of Cassie’s lungs and heart to 2OV…hmmm…. Was there even a real X-ray, or did he show me some other dog’s X-ray to scare me into paying for expensive treatment for Valley fever?

2OV did not say so but she sounded a little nonplussed by MarvelVet’s prognosis that the dog will live about 3 months if left untreated.

Arrrghhh! I feel like the Wicked Witch of the West to be so skeptical about all this. But my own Adventures in Medical Science — to say nothing of past Adventures in Veterinary Science — incline me that way. I just have the worst feeling that this thing is not only a tempest in a teapot, it’s a fraudulent tempest….

Meanwhile, speaking of Adventures in M.S., I’m not yet very alarmed about the alleged skin cancer thing. In the first place, we don’t know that it is skin cancer. Young Doctor Kildare a) is not a dermatologist and b) is a D.O., not an M.D. Although osteopaths are licensed to practice medicine in this state, a D.O. from Midwestern University is not the same as an M.D. from Johns Hopkins or some such. YDK’s sterling quality is COMMON SENSE. And we see this characteristic here: Duh! Send this woman off to a dermatologist.

Hmmm…and lookee here: the lady is not just an M.D., she’s listed in U.S. News and World Report!

I haven’t been able to get in to a dermatologist for years. They’re all backed up for six months or more — literally, you can NOT get an appointment. So YDK’s having shoved me in to see this woman — in three days flat — is quite a little feat. And a relationship with her will be valuable for me, because when you live in Arizona you really should go to a dermatologist about once every year or two and have all the colorful growths that sprout inspected. Just about everybody who lives here permanently eventually gets some kind of skin thing.

Seventy-one degrees and a rainbow over the ’hood!