🙂 So yesterday I bought a new communication complex at Costco. We used to call these things “telephones.” I’m afraid that term no longer suffices… 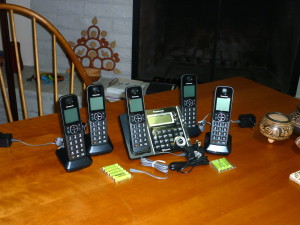 I bought it because if you have caller ID  you can use this contraption to block up to TWO HUNDRED AND FIFTY nuisance callers. Hee heeeeee! That is SO much better than the five-minute answering messages that cause robo-calling machines to hang up.

Also, my beloved Uniden set is getting old. Replacement batteries for the Uniden are hard to find and a pain to install, especially now that Radio Shack has closed. I used to take the dead handsets up to the Radio Shack around the corner, where the guys would not only sell me new funny-looking battery thingies, they would put them in, too. That was very nice.

The Panasonic uses ordinary AAA batteries — well, the rechargeable kind — which you can get about anywhere and you can replace easily. So that’s a big plus.

But…just lookit that thing. You can connect not one but two cell phones with it (does that mean when you’re using your cell you’re not using up minutes??). Its base unit will run on a handset’s batteries, so when the power goes out your phone doesn’t instantly go dead. It does things that no one ever heard of and no one really has any desire to do.

And thanks to all that functionality, the damn thing is SO COMPLICATED that the instruction manual is NINETY-SEVEN PAGES LONG!

However, once I figure out how to get it to work, it will have just as many extensions as the Uniden does (a phone in almost every room!), and it will allow me to block incoming nuisance calls.

Most times when the phone rings anymore, it’s a nuisance telemarketer. AARP (I suspect) sells its mailing lists to the crooks, so if you’re in the “senior” category you get blitzed with scammy pitches and frauds at all hours of the day and night. On average, I get three to five of these calls a day, even though I never answer the phone to them.

Only drawback I can see is that if someone calls in such a way that “no number” is available, the Panasonic will automatically block the call. Both M’jito and SDXB have phones that occasionally register with the Uniden as “Unknown Caller,” so I’m a little concerned that it will reject calls from them. Maybe there’s some way they can adjust their phones to make their numbers visible — it’s not consistent, so I don’t know why that happens.

Sure would be nice, though, to stop people from harassing you without having to buy a telephone that requires 97 pages if instruction…