By the end of April, Connie the Queen of the Big Rigs is headed back home (Phoenix) for a five-day turnaround. Silver the Ingenious Weimaraner refines her plan to take to the road — not on 18 wheels, but on four feet.

Oklahoma on My Mind…

Going home in a couple of hours. Done here at Sysco Foods.

This is the kind of “food” I’ve been eating for a couple of days. I have run out of my stash of “healthy provisions.” Does this give me “junk food foodie” status? 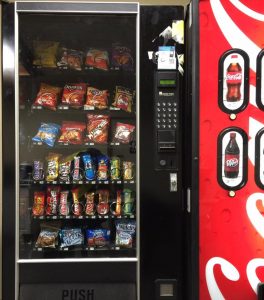 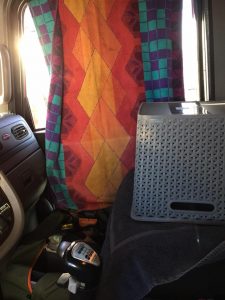 ←My attempt at keeping the doggie from escaping.

Covered the door handle by hanging a towel over the window. 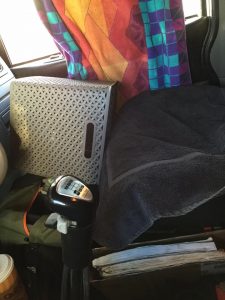 This is how it looked when I came back from dinner. She sure tried! →

April Turns to May…

Was home for 5 days. Too many projects! (still have not done my taxes – yikes)

↓ Found this in the paid parking lot on the ground under someone else’s trailer at Danny’s Truck Resort when I went to pick up the truck Monday. That enough prepositional phrases for ya?

No, I did not show it to the cashier. I had actually overpaid for the spot but didn’t feel like trying to explain it to anyone at the “resort.” 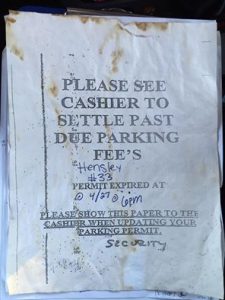 Happy Freakin’ Mothers Day to all you mothers out there!

This day has turned out to be a mother.

I used to make Puke/Emote lists in high school so I could remember what was going well and what I felt I should be worrying about.

You know, like, did I have anything to wear? Were we going to float down the river that weekend and was I too fat to wear a bathing suit? Did I get a good grade in (yuck) German class? Did the cute guy who sat near me in Algebra say hi?

In honor of Mothers Day, I am going to share my Puke/Emote list for the week. Will make it up as I go along…

Please note that this is in no way all-inclusive and is subject to revision at any time.

Will start with Puke, so I don’t have to end this post on a sour note(!)

1) My iPhone will not hold a charge. The ATT store manager in Phoenix said it could not possibly be the battery because they are “integrated” with the phones now. I am not believing this but go along. I just want my phone to work, dammit. He sells me two chargers and is sure both of mine have to be bad. Because, again, it CAN’T possibly be a bad battery.

2) I swapped trailers with a guy in Phoenix and did not notice the bent bumper until just now. Hope they don’t try and blame it on me.

3) After being gone a day I notice my phone will still not hold a charge.

4) Saw a Facebook post with a horrible picture of Donald Trump’s son holding up a body part from an animal he killed. I fear it is not Photoshopped. I am now traumatized! There are no words that would describe how much I loathe people who kill for fun.

5) I was asked to do the broker of this load a “favor” and deliver it one day early. WTF? Of course I said yes as I am new to this company and, well, if they are really in dire need of my watermelons who am I to judge?

I was already tired from my time “off” at the house, and in order to drive the required miles in the shortened time span I did what has always worked in the past. I ATE my way across Kansas, Missouri, Iowa and 100 miles of Minnesota. Three large cups of coffee, one cheeseburger, three chocolate protein bars (choc caramel, choc coconut and choc pnut butter), 1/3 of a container of peanut butter pretzel nuggets, cheese popcorn, and an entire bag of XXX Red Hot Cheetos got me as far as the IA/MN border. Now I have heartburn and my pants are too tight.

6) I arrived at Russ Davis Warehouse in Eagan, Minnesota at 5 PM on Saturday, May 7 AS REQUESTED only to be told by the Receiving Clerk guy that they did not need the watermelons early. Could I just come back tomorrow?

7) Drove 60 miles out-of-route (unpaid miles) back to the Flying J truck stop to chill out. I tried calling friends to vent but all you mothers were busy!! I did get to vent to new roommate who has major issues with his insane boss at work. This helped.

8) Got up early the next morning to get in a much-needed shower. Was hurrying to make sure I did not miss my original delivery appointment. Dropped a glass bottle of face make up (brand new, of course) onto the tile floor and it EXPLODED when it landed. It was everywhere. In the grout cracks, on the walls and all over the side of my boot and crispy clean jeans.

9) I scurried back out to the truck after cleaning up the mess and did not see Silver’s happy face in the window to greet me. The drivers side door was open. She had decided to escape out of the drivers side door since I cardboarded up the one on her side. NOOOOO!!!

Ran around the parking lot and woods calling frantically. Lots of people in the car and truck parking lots said they had seen a “hound dog” running around. Ten minutes into it a woman pointed into the woods to tell me someone spotted the dog back there and I called out Silver’s name again. She came zipping out of the woods with wet/muddy paws – barking as she ran toward me in a total panic.

10) Now the door panels of both doors are scarred up with scratches from the dog trying to claw her way out of the truck. I got an estimate to repair the damage: $350 per door.

11) I got unloaded at the organic produce place around noon. The forklift driver came out with my signed bills and informed me that nine of the 54 bins of watermelons were rejected and put back in the trailer. I am now parked near an off ramp waiting for the broker to tell me what to do with them. I know what I’d like to tell him to do with them.

3) The weather is 65 degrees here in Minnesota today and all the trees have greened up.

4) My Peterbilt still looks cool and it still has a chrome visor and bumper.

5) I don’t live in a trailer down by the river.

6) Have not had a zit in quite some time.

7) It’s Sunday and I have time to finish all my paperwork before I go to the office tomorrow.

My wild child enjoying the Minnesota flowers – next to the highway ramp! 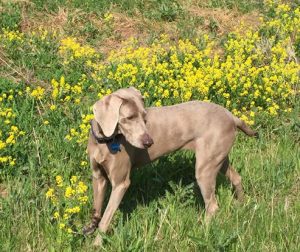 What is one of the most disgusting things on this planet?

Silver must have picked one up on her romp through the woods this morning. Found it on her stomach while I was giving her loves just now. Total freak out…because I am so mature. 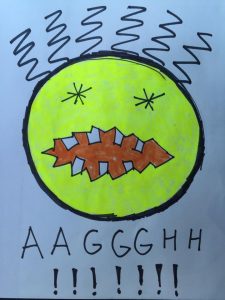 Silver made another friend at the evil watermelon rejection company today. 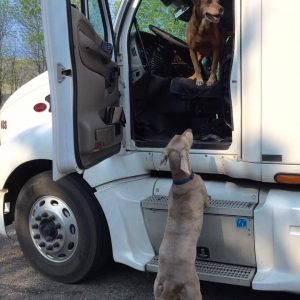 This might not seem that annoying to the average person, but when such a large part of the day is spent following signs at places and on roads you have never been to/on before, an accurate sign really means a lot.

Can you tell by looking at this sign where the Receiving office is? 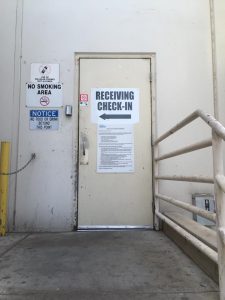 The Saga of Connie and Silver…