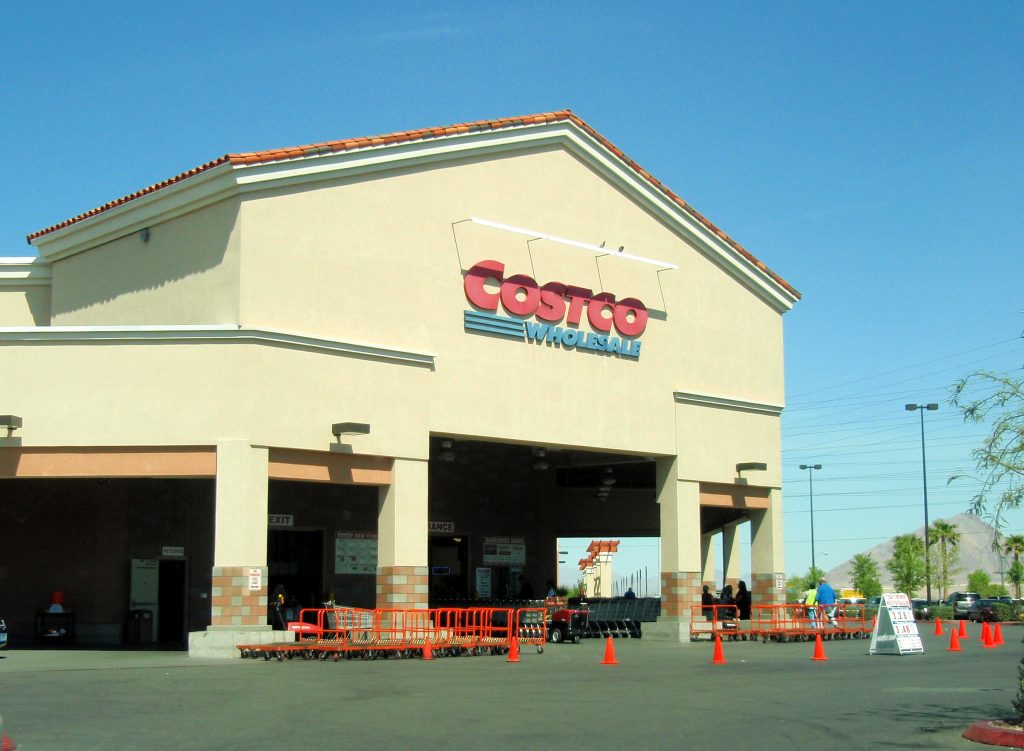 Well, the Costco Cash Card Budgeting Scheme worked out exceptionally well for July. By the 31st — yesterday — I ended up with $54 and change left on the prepaid card for in-store shopping (budget: $300), and about $45 left on the gasoline card (budget: $60).

The gas card held up well because I’d filled the tank right at the end of May — the 30th or 31st — so in fact the $60 budget intended to cover two fill-ups was only needed for one, and that, not a total fill-up. And the three hundred bucks was probably about right for a month’s worth of grocery and sundry purchases, in the absence of the dreaded Impulse Buy.

So today I join my friends and companions in shopping crime for a Costco Run. We get there as the store opens, but it’s still monstrously hot outside, and warm inside the store, too. This particular day, I’ve driven us not to our favorite store on the fringe of East Richistan, but to a more middle-class outlet on the lower edge of Whiteyville, up on the I-17 freeway. This is a good enough store, but what draws me is that they sell propane. For a lot less than regular vendors do. And I’m low on propane. I lash two tanks into the back compartment of the unbeloved Venza, and we’re off.

We circumnavigate the store, but we find it a little frustrating because its layout is nothing like the other two big-box warehouses we frequent. And I’m pretty sure they’ve rearranged everything since the last time I was there…so I’m no help at all, because I have no clue where they’ve put things. NOTHING is in what feels like a normal place. We wander around, perplexed, dodging millennials and their urchins and generally having to walk three times as many steps as we would normally have to do, to find the stuff we normally buy.

In the course of this venture, Mr. Friend says he’s not feeling well and needs to sit down. Mr. F, you should know, is in his 90s, as is Mrs. F. Fortunately, Costco is selling furniture these days, so Mrs. F and I park him in a dining-room set and take off to find the last couple of items we need. But since he has remarked that he’s afraid his heart may be acting up, I’m worried.

Shortly, we head for the check-out. Mercifully, the lines are extremely short, and we get up to the cash register forthwith.

I tell the cash register guy, when he presents me with a bill for $156, that I would like to top up the depleted Costco cash card with another $250, and then pay the bill with the cash card. He says he can’t do that: he can’t add new money to an old cash card.

Huh? That’s not what they told me at the Outer East Richistan store.

But, says he while I’m puzzling over this discrepancy, he can take the $55 off the old card, put it onto a new cash card, and then I can use my credit-union debit card to add $250 to this new card.

It’s hot, I’m tired, and I’m worried about my friend, so I say okay, make it so. We get through the checkout, stumble back out into the heat, collect the propane tanks, and escape.

So now I have to get into my car and drive through the heat, fight for a parking space, and hike across the parking lot to my local Costco, down on Conduit of Blight Blvd.

When I get there and explain that with $156 extra taken out of the bank, I won’t be able to pay the utility bills, the customer service lady is flabbergasted to learn the guy told me he couldn’t refill the cash card. Of course he can refill the cash card, said she.

She called over a guy and said “Fix this!”

And he fixed it. What he did, basically, was simply withdraw $160 from the card and had me a fistful of cash.

This worked. I can either schlep it up to the credit union and re-deposit it (oh, goodie! another 40 minutes of dodging my fellow homicidal drivers through 115-degree heat!) or simply use it to buy stuff during this month. Probably the later is the path of least resistance.

While I was there, I refilled the gas tank, leaving $8.25 of the original $60 cash card for gasoline.

Tomorrow I have to drive to Tempe, so for sure I’m not going to make a whole month on one tank of gas. That’s really pretty unusual…normally I’d have to fill up twice in 30 or 31 days. But still: I’ll only have to put $51.75 on it to top it back up to sixty bucks.

Meanwhile, $40 was left from the rest of this month’s budget, after everything was paid. So I’m figuring if I shifted that over to the Emergency Savings Project, that would help to revive the account to its former glory We put $681 in there, the max I could spare from July’s Social Security deposit and still have enough in checking to live. If no emergencies require withdrawals from that account (har har!!!), then in a year there should be $8,172 for unexpected expenses.

It would be slightly likelier to happen if at the end of each month I transferred whatever few dollars remained unspent from that month’s budget. Say, $40…multiplied by 12, that would add $480 to the pot. And if $40 is left over at the end of July, the worst month in creation for utility bills, then a lot more would be left over in January and February.

When I got home from the second Costco junket, I realized I’d failed to buy coffee while we were at the Whiteyville store. However, there’s a Costco on the way home from Tempe, on 44th street just north of the freeway. So I’ll have to stop by there tomorrow afternoon. In the heat. Probably in the rush hour, by the time I spring free from the university library.