Getting rid of stuff feels so good! Out with it! Seriously: one tried and true frugalist strategy is simply not to buy things you don’t really need. Another, though, is getting rid of stuff that you no longer need. (Or…ahem…maybe never needed in the first place.)

Case in point: the beloved Pawley Island hammock that has resided in the backyard since I moved into this place. Actually, I bought it in the old house, quite some years before I moved out. Since I was there about 12 or 14 years, I’d probably had it there about 8 or 10 years. That house had park-like landscaping full of mature trees, and so I could hang it between a big old olive tree and a silk oak, one of the messiest trees known to personkind.

Loved loafing in that hammock. Once it came over here, though, I had no place to hang it. Satan and Proserpine (the previous owners) were great at DIY interior redecorating, but they simply did not know what to do with any space not under roof. The backyard had almost no trees. So I bought one of those arc-shaped hammock stands. Like this… 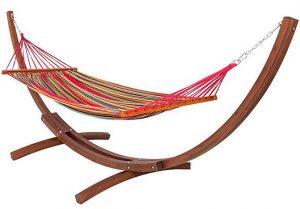 Expensive as all get-out. Took three men and a horse to put it together. Too heavy to move without said three men and the horse. But once in place, it worked fine.

I’ve been in this house for 14 years now. So…that hammock lasted about twenty years before it finally rotted in the sun and rain and fell apart under my weight. No kidding. This: a couple weeks ago. No problem hauling off the hammock. But the wooden stand itself was a challenge.

Thought about replacing the hammock, to the tune of $150. Then thought…why?

Gerardo came by Saturday with his crew. They were happy to take it away. They did deconstruct it (the only way they could get it into their truck). Whether they’ll reconstruct it, I don’t know. But with four guys there, I expect one of them will cheerfully accept the donation.

SDXB used to say that throwing out stuff he was no longer using made him feel lighter. And there’s something to that. In the old house, the thing hung over a patio, so I could walk up to it bare-footed. Here, it stood in the middle of a field of quarter-minus. That’s very fine gravel. It pokes your feet, and if that doesn’t poke your feet, the sharp debris the devil-pod tree drops surely will. So to lay on the hammock, first I had to put my shoes on! Since I’m usually barefoot in the house, shoes are usually lost somewhere. Having to track them down made hammock-swinging more trouble than it was worth.

I’m so glad to get that thing out of there. Even though it served its purpose, it took up a phenomenal amount of room. The dogs would go in behind it to do their business, meaning I would have to climb in behind it to clean up after them. One fewer thing to have to take care of! The yard looks better without the clutter, and now there’s nothing over there for the hose to get caught up on.

Deciding to get rid of the arc stand, which was approaching decrepitude, too, meant I saved a hundred and fifty bucks.

No. Make that more like three hundred bucks. The stand itself was getting pretty weather-beaten and would soon need replacing…and those things cost $150, sans hammock.

There’s no way I’d get another $300 worth of use out of a new hammock and new fancy stand. At the old house, I certainly got my money’s worth out of the hammock. But here, for the reasons above, I’ve rarely used it.

How does that translate into a general Frugality Rule of Thumb?

And maybe your spirit will be lighter without it.

1 thought on “De-accessioning As Frugalist Strategy”