They are a few Heath stoneware bowls to replace several that have been busted, leaving my beloved set short of its original eight place settings.

Alas, however, my set is so old that Heath no longer makes dishes in the color, a kind of aqua blue. They also no longer make the larger of the bowls that came with the set, one that apparently was once billed as a “salad bowl.” Checked on e-Bay, where I found only one dinner plate in The Color, which I don’t need and which is in a different style from mine, anyway. 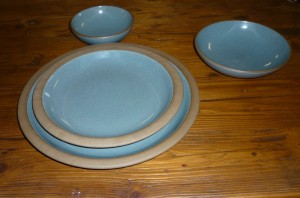 Interestingly, prices on e-Bay are just about the same as the prices Heath Ceramics is charging for brand-new pieces. Only trouble is, Heath’s offerings are somewhat limited. But then…so are e-Bay’s. Prices for these “mid-century modern” dishes are, in a word, bracing.

However, they’re almost unbreakable, the style is so pleasing that one never tires of them, and they last a lifetime and then some. M’hijito has my mother’s set, which he uses every day (as I use mine), and I still have the earth-mother green set my ex- and I bought shortly after we married, a ceremony performed by gaslight. I no longer use that set unless an awful lot of people come to dinner, but it’s still unchipped and unwinnowed by breakage.

Well, my set is in the style that has a wide unglazed-looking rim. The native color of the stoneware is a kind of taupe, a very pretty shade that contrasts nicely with just about any glaze Heath uses. No law says that every piece in the set has to be the same color—matter of fact, at Heath’s website you see “curated” (yeah) (stop that laughing!) sets that mix & match. Why not get replacement bowls in a color that would pick up the rim on the smoky aqua plates? Like this:

For example, here’s the dessert bowl, of which I need one and would like five, in a color combination called “cocoa fawn”:

That would go exceptionally well with the foggy sky-blue set I have. In fact, it would help to tone down the turquoiseness of the blue. Could be a very desirable choice.

When I got the set, I bought only four of these, because I didn’t expect to use them much. However, as it develops, I use them all the time. I’ve broken one and so need to replace that, but if I’m going to have three in blue and one in greige, then I guess I’d like to fill out the set to eight (i.e., buy five of new bowls), so if anyone ever comes over to dinner and we need to use this size dish, everyone can have the same color.

This bowl comes in a style called “coupe,” which was introduced in the 1960s. They’re only making two bowls in the desired style anymore, one the size above, which I need, and one billed as a “cereal bowl.” That means I can’t replace the larger bowls I originally bought. The available 6.5-inch bowl looks like this: 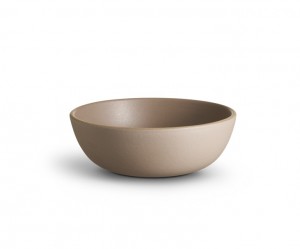 Note that it’s a different shape. The old “salad bowl” was the same shape as the “dessert bowl,” sleeker and lower. I got them because I don’t eat cereal often and because I much preferred the leaner, crisply-lined design. But if I’m going to get a 6.5-inch-diameter bowl in Heathware, I guess this is what I’ll have to settle for. To make up for the missing bowls, I need three of these.

Let us consider the price: The dessert bowls are $23 apiece. The cereal bowls are $28. So… just to replace the missing bowls:

That’s not too breath-taking. I can afford that this month, with no problem.

However, I really do think that if I’m going to do this, I ought to get eight of each, so as to have eight in the same color to go with the eight otherwise intact place settings I already own. How much would that set me back?

Four hundred bucks. Holy mackerel! That’s pretty problematic, especially at this time of year. The August power bill will arrive this month, and it’s likely to be around $250, as high as it gets all year. And as we speak, my car is at the shop for its regular maintenance, plus I think its battery should be replaced before it craps out in some remote place, and I’ve whacked the front right wheel on curbs several times, and I hit a pothole with the same tire twice, so I suspect it’s out of alignment. And one of the rear brakes is squealing again. These things could add up to a substantial hit.

And we know—we know, because it’s a law of physics—that the instant I pony up $408 for a passel of dishes without which I probably will not die, Chuck the Wonder-Mechanic will come up with $650 worth of repair bills.

What if I bought the replacement pieces (5 dessert bowls, 3 cereal bowls) this month, and then next month, when I’ll have new cash infusions from Social Security and the junior college district, round out the collection with to bring the total up to 8 apiece? It would cost me $199 this month, and then $209 next month.

This would leave enough in the September budget to cover moderate-sized unplanned expenses, and then the October budget, which will reflect slightly lower power bills, should be able to accommodate the second order.

What we have here is an example of the frugal principle of delayed gratification. When you want something, wait.

Wait until you have the cash to actually pay for it, rather than racking up the cost on a charge card. Requires some restraint. But it keeps you out of debt, and eventually you get what you want.