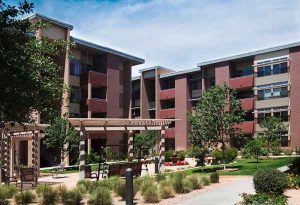 Yesterday my agèd friends who just moved into the Beatitudes, a very fancy life-care community where business is booming, invited me join them at the institute’s fanciest dining room (it has three!) for lunch/dinner. The Beatitudes, in its current incarnation, is very nice indeed: much like living in a first-class hotel or on the Queen Mary.

(Yes, I once did cross the Atlantic on the Queen Mary. That ship personified luxury accommodation.)

And in that visit, I gained several valuable insights.

First off, after much worried clucking about how far the eateries are from their apartment (in their 90s, they both have their share of infirmities), they both said — out of the blue — that after having to walk around for just a few days, they’re each feeling a lot better. J. said her back and joints are actually improving, and she’s experiencing noticeably less pain. L. said he also was feeling, overall, better than he had in a long time.

So (said she, while loafing in front of her computer): those daily walks are not an option! If you want to feel as well as you can feel, get off your duff and walk around the neighborhood. Or the park. Or the indoor mall, if that’s what it takes. Apparently, the more you move, the longer you’re likely to keep moving.

Next: as to the long-term care insurance conundrum:  A lady came up and said hello to us, then disappeared into the scenery. In passing, my friends remarked that she had not bought into that place…that she rented an apartment instead.

Whoa! Hold the phone. That puts a whole new complexion on the long-term care insurance issue. Now that they mentioned it, I recalled that my father once rented an apartment at an old-folkerie associated with a nearby hospital (it’s quite a story…one day I’ll have to write it up for your delectation!). And it was possible to rent an apartment at the old-folkerie where he had used the entire proceeds of the sale of his home to buy in, though at his LTC commnity  renting was a short-term arrangement.

If you could live at the Beatitudes, on a long-term basis, as a renter rather than as a member of their buy-in “community,” and if renting there would give you dibs on a bed in their nursing home, then it might make sense to keep up the LTC insurance. Here’s why:

If you’re living in one of those life-care communities, you’ve got access to its nursing home (in these parts, a VERY big deal, because decent nursing homes are few and far between here). You’ve got twice-monthly housecleaning. You’ve got daily access to prepared meals as part of the deal. You’ve got a secure environment that’s safe and free from bums and burglars. You’ve got a whole staff keeping an eye on you and likely to notice when you don’t show up because you fell in the shower and broke your hip. You’ve got staff who fix things that break.

But these outfits charge a huge entry fee, basically about what you would clear on sale of an upper-middle-class home. That entry fee effectively serves as nursing-home insurance: by getting you into the life-care community, it pays for access to the institution’s on-campus nursing home: if and when you need it, for however long you need it.

But what if they let you just live there as a renter, with no pre-paid nursing home care? (Pre-paid, we might say, on the come….)

If you did not have to fork over your entire damn life savings to put a roof over your head with guaranteed access to competent nursing care — if instead you could be pretty sure you would end up in a specific nursing home for a period that could range from a number of days to a number of years, as long as you paid for it as needed —  then it would make sense to keep the MetLife LTC policy.

It would, of course, depend on what the institute charges for rent. And whether it gives renters the same preferential access to its nursing home that it gives to residents who give them a giant buy-in fee. (These outfits generally guarantee residents access to the on-campus nursing home or, if the place is full when you need it, to a nursing home of comparable quality.)

For people who buy in, in addition to its stiff entry fee the Beatitudes charges around $3000 a month per person. Together, these charges act as de-facto nursing home insurance. The money buys you a bed in the nursing home should you need it, without an increase in your monthly ding. Of course…if you never need it, then that’s money down the drain. If you do need it, the arrangement could in fact save your heirs most of their inheritance.

But if you could rent to live there, without having to cough up a buy-in fee, it would make sense to keep the nursing-home insurance — that is, assuming a rental agreement includes access to the on-campus nursing home. The Beatitudes supposedly charges people who live in the wild something in the range of $10,000 a month for nursing-home care. This would quickly drain your assets.

It costs me $2,000 a month to live in my home, and I don’t get anyone else cooking my meals. Another thousand bucks to feed me, clean the house, change the sheets, and guarantee availability of nursing care is within reason, more or less….but only if I don’t have to give up whatever I would make on the sale of my home! If renting made that possible, with the understanding that I’d have to pay out of pocket for any nursing home care required, then…

I’d really like this house go to my son so that he can either sell it and bank the proceeds, rent it out to generate some cash flow, or move into it if he pleases. That means I do not want to have to sell it and spend the proceeds to get myself into an old-folkerie when I can no longer manage the place. Next week I’ll call over there and arrange to listen to their sales pitch. And be sure to ask them whether you really can rent without having to buy in, and if so, what you get for the rent.