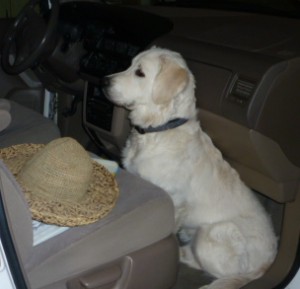 So Charley the Golden Retriever is still alive. And I had the locale wrong, for reasons attributable only to senility: somewhere along the line “Show Low,” the garden spot where M’hijito and his dog are presently becalmed, morphed in my aged mind into “Snowflake,” a different  wide spot in the Arizona road. Show Low is even further from lovely uptown Phoenix: it’s about a five-hour drive. Images all seem to be copyrighted, but you might enjoy this rustic piece of public relations…

Nice and cool up there, though. It’s hot, humid, and rainy down here.

The vet’s office in exquisite Show Low is closed on the weekend, but they’re kindly letting M’hijito visit his dog while staff go in to check on the imprisoned livestock. They also hope to get a vet in to talk with him this afternoon, maybe.

Charley lives, to the surprise of all concerned. The vet expected him to die and prepared M’hijito (repeatedly) for that eventuality. Apparently he’s stronger this morning and able to sit up (which was not so before this). However, his bloodwork still ain’t great: they’re telling M’hijito that the platelet count is low.

However, he had a bowel movement that was not bloody diarrhea — which would have been the case had the predicted devastation to his intestines occurred. I have not heard that he’s bleeding from the nose, gums, or anus, which would be the case if the low platelet count indicated internal hemorrhaging. There’s some indication of harm to the liver, but the vet says a dog may recover from some injury to the liver.

The vet would like M’hijito to take Charley to a 24-hour veterinary facility. Here in the Valley, these places are billed as “emergency animal clinics,” and they charge $1300 (!!!!) just to walk in the door. Got that? It’s just the down payment. If you say “we can’t afford that,” they will summarily turn you away! Customers either love them or hate them: some people report good experiences, but evidently if you’re unfortunate enough to have a bad experience, it’s very, very bad.

M’hijito says tomorrow morning he will call his vet’s office (she actually retired, but at least he’s on record as having been a customer there) and follow their advice, although clearly his inclination is to take the dog to a 24-hour place.

Meanwhile, as reported yesterday, one researcher found that all the hyperthermic dogs in a study survived if they made it through 72 hours in a veterinary hospital.

Additionally both hypothermia (getting too cold) and hyperthermia (getting too hot) can on their own cause platelets to die off. In vitro (i.e., in glass: in a lab), they readily regenerate at room temperature. This suggests that if the dog actually is not hemorrhaging internally, his blood count should recover in due time. If he were bleeding much internally, he would not appear to be getting steadily better, a little each day. Presumably, he would not even be living at this point.

And I also learned that, at least in humans, hyperthermia can be psychogenic — that is, stress can bring it on.

A more technically inclined report says that in humans stress can lead to transient hyperthermia, which will not respond to aspirin (and similar drugs used to treat fever) but which may respond to sedatives and antipsychotics.

As far back as 2008, researchers were talking about stress-induced hyperthermia — the vets up there should know about this, you’d think.  Presumably, though, because they’re in a rural practice they have no need to.

My son says the dog was never exposed to high temperatures en route, not even when they were stalled for an hour by the road construction in the Salt River Canyon. In fact, he says, the inside of the car was “cold as an icebox.” He let Charley out of the car while they were stopped, to let him walk around…and noticed then that he was panting and wild-eyed. This he attributed to the dog’s usual dislike of riding in the car. For unknown reasons, Charley was OK with the decrepit Honda sedan M’hijito used to drive, but he hates loathes and despises the Ford Escape that took its place. Under normal circumstances he freezes up and goes all rigid, M’hijito says, and sharing the back of the vehicle with camping gear evidently got him massively overwrought. M’hijito thinks he became so frantic in his fear or phobia or whatever the eff that he worked himself up into overheating. That possibility seems to be confirmed by the studies above.

Less evident is whether it’s really necessary to consign this dog to a 24-hour emergency veterinary once he’s well enough to travel five hours inside the hated vehicle, or one like it. These places are renowned for bills that run well over $1,000, and one person reported a bill of $22,000. It’s hard to get a straight story, unfortunately, because most of the sites discussing this subject bear all the hallmarks of paid posts, at one point or another coming around to a pitch for pet health insurance.

Herein lies the problem, my friends, with raising children in an upscale urban setting. Well. One of the many problems.

In a setting where dogs and cats are “members of the family” and animal owners go around calling themselves “pet parents” (for godsake), it’s impossible — it surely is socially unacceptable and it probably is objectively impossible — to communicate to a young person the ethos that a dog is a dog.

It cannot understand why it’s suffering, and its concept of the future does not include “someday maybe I’ll recover and sure, I’ll be a cripple but that will be OK because I’ll still live to see my grandpuppies graduate from Harvard.”

So moderns like M’hijito whose parents did not grow up in rural settings aren’t prepared to deal with the eventuality of putting an animal down as the kindest thing for all concerned.

You know, my father grew up as a cow-puncher and my mother’s family scratched a living out of a dirt farm in upstate New York. Neither one of them would have wanted to put a pet down. But neither of them would have impoverished themselves to keep a seriously injured or sick dog alive, or forced that animal to live through a lot of suffering on a long-shot chance that it might survive.

Nor, I might add, would my father have put up with a supposed hunting dog that was so neurotic you couldn’t take it for a four-hour ride in a car without it collapsing in a phobia-induced state of hyperthermia.

My own sense is that one should do what one can, within reason (got that? within reason is the operative term here) and then let nature take its course.

Our ranch manager once told me that. I asked him if we shouldn’t call in a vet for a very aged horse that was suffering an ailment. He said, “No, we should let nature take its course.” And he was right. I would have called the vet; still would, being a city girl. Nothing much would have happened. The vet would have charged more than the horse was worth; the horse would still have died. But I wouldn’t have felt guilty about it, anyway. I guess.

About eight times out of ten, I expect, letting nature take its course is the most merciful thing for all of us. All told.