Welp, I’m on my way…first to a hair appointment of long standing, and second to the Mayo, where they urgently wish to see me. Looks like the clindamycin is, as I tried to tell the endodontist, indeed very possibly causing a fine case of C. difficile. So it’s off to their acute care section, where I have to be at 2:40. It’s an hour’s drive, and I have to be at the hair guy at 1 p.m. So…40 minutes to Shane, another 40 minutes from his place to the Mayo…should work out just about right…

ugh. Just what I wanna do with a nice, humid 112-degree afternoon.

Like a rocket, straight across the city to lovely Olde Towne Scottsdale!…

So here I am at the hair stylist’s, about 10 minutes early. He’s still eating his lunch. Appointment isn’t until 1:00, but fortunately, suspecting the usual worst, I left 50 minutes beforehand.

Yea verily, as usual in lovely Phoenix, wherever you’re goin’, you can’t get there from here. Hence, almost an hour to make a twenty-five-minute drive was cutting it close. No sooner do I turn out of the Hood onto Main Drag East than I spot emergency lights flashing at the Desired Intersection, about a mile & a half down the road.

Dayum! think I: Wrecky-poo. Better turn left at First Intersection so as to dodge that mess.

Weirdly, there is exactly no traffic on Main Drag East. This is one of the mainest of main drags in the city. During the noon hour, lots of my fellow homicidal drivers should be dodging up and down it. Nary a soul.

So I get into the left turn lane and hope for a break in the traffic on Main Drag South, enough for me do dodge suicidally onto M.D. South, eastbound. From there it will be all the way to 12th Street and then down to Glendale, which turns into Lincoln Blvd, which will take me to Goldwater Drive, which turns into Scottsdale Road, which deposits me at Shane’s salon.

Cross-traffic on M.D. East is heavy. A cop pulls up and parks on someone’s yard, and I think Ah! He’ll direct traffic and let me turn left. No. He never gets out of his car.

So naturally I dodge suicidally in front of the Oncoming, make it onto the eastbound arterial, and fly away.

At 24th Street our honored City Parents have Glendale/Lincoln CLOSED DOWN TO ONE LANE while they excavate the road.

Mile on mile on mile of road. Lincoln is restricted from 24th Street all the way to Tatum Blvd. This is, says Google Maps, only three miles, but when you’re puttering along at under 25 mph while you try to get to an appointment on time, it feels like about 30 miles.

I do not know why it is that wherever I’m goin’ they have the roads torn up, wrecks littering the landscapes, crazies banging around, ambulances and cops tearing back and forth…but it never, ever fails. 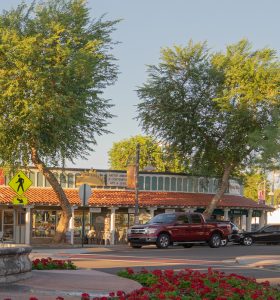 Oh well. I make it to Shane’s place. He does a beautiful and expensive job on my long flowing locks, chatting all the time. His brother died, sadly enough. Colon cancer. The guy lived homeless in the woods outside Flagstaff, his schizophrenia making the sound of human company an agonizing distraction.

Shane has one last photo of his brother, the two of them posing together. What a strange and heart-breaking contrast: Shane handsome, healthy and vigorous; Bob tired, gaunt, and streetworn.

From Shane’s it’s up to the Mayo Clinic, where I have an appointment a scant hour and a half after the hair get-together. This, arranged on the fly along about 9 this morning.

For the third day in a row, I have runaway diarrhea. And if you read the flyer and the online material for clindamycin, you see that clindamycin is associated with Clostridium difficile infections, and that often this comes within a few months of taking it. So…it’s tiiime!

Heavy traffic on Scottsdale Road, but not bad eastbound, halfway to Payson, and into the Mayo.

So here I am… Just talked to the cutest young doctor in training. He thinks it’s not C. diff but more likely a passing virus; maybe a bacterial infection. He thinks it’ll go away in a few days.

Let us hope so! 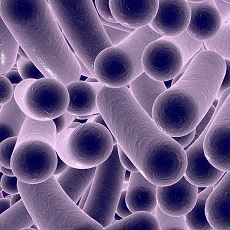 Doc-in-Training’s boss doctor comes in, a middle-aged soul who has the look of a person who has absorbed considerable acquired wisdom during her life. She also opines that I do not have C. diff, and reels off a number of good reasons. She offers to do a test. I say if she feels confident that this is really just a passing minor bug, then in my opinion less is more. She inclines to agree. I am out the door.

Now I have to get home. How to avoid whatever that was, if it’s still there. Three hours (plus) have passed, so presumably the mess, signal outage, whatEVER is gone by now. But if not..,.

Ah yes, if not…by the time I get there it will be High Rush Hour. Rush hour starts at 3:00 in these fine parts. That’ll add a mess to a mess.

Driving driving driving back through central Scottsdale, reflecting that the stores and malls there have hardly changed since my friends and I were in graduate school and this was our stomping ground. What has changed was the tract where my best friend B and her husband bought a little (tackily tossed-together) house on a big chunk of horse property. The structure was so cheaply built that you could see the sky where the living-room window didn’t fit the frame. The builder hadn’t even bothered to fill the gap with putty.

Shortly, she divorced her husband of the moment, mostly – truth be known – because at the time she took up with him, she was playing at being countercultural…but he really was countercultural. Alas, at heart, countercultural was not her game; under the long straight hair and the stylishly hippy clothes, she was a nice middle-class bourgeoise. When it occurred to her that he was getting more and more like his father (a dyed-in-the-wool eccentric) and that she did not want to be like his mother (to whom it fell to support the father and their three children), she flang him out.

She ended up (how, I do not know) with the house, and the debt associated therewith.

Not very long after the break-up, along came a real estate developer. He wanted to buy up all the properties in that tract so he could convert the land into a shopping mall. A freeway – now known as the Pima Freeway or Loop 101 – was on the drawing board, and so the proposed mall promised to be 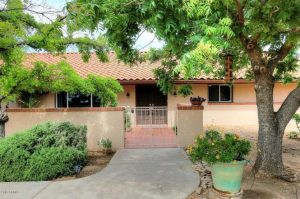 B refused to sell.

The developer was uncowed. He came back with new offers…the most attractive of which was “how’s about I buy you another house?”

She said, “I might consider that. But only if my mortgage payments remain the same. And it needs to have lots of space between me and the neighbors.”

Incredibly, the guy finds her a place on what was then the eastern edge of Scottsdale on over an acre of land, with a desert wash running along the back property line – adding another good 30 feet of width. The house was about 2900 well-built, handsomely equipped square feet. Basically what he did was give her a very fine home in one of the most desirable parts of Scottsdale, for the cost of the piece of junk she was living in.

She lived happily ever after there, working away as a college professor. Recently she retired, and she and her second husband sold the place for $737,620, just about enough to buy in the Pacific Northwest, whither they decamped.

Sailing homeward across the Valley on Shea Boulevard, I encountered traffic that was thick, heavy, but moving. Hit the freeway and you get the aggressive demented idiots, people who try to pass you on the right shoulder when you’re tailgating the guy who’s moving up the onramp ahead of you. Luckily, I also am aggressive and demented, and so in response to one of these this afternoon, closed the six or eight feet between myself and the guy ahead of me to four or five feet, fuckyouverymuch Jerkowitz.

So now it’s 4:19 and the Human has just made it into the Funny Farm. The light at the entrance to the ’Hood was functioning, but while I was gone, the City shut down a lane coming and a lane going, indicating that we will have to use Gangbanger’s Way for ingress and egress while they dig up the road, if we are to avoid yet another interminable traffic jam.