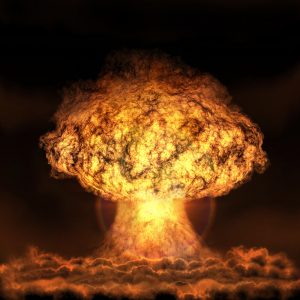 So the Koreans have the bomb. And they hope to drop it on D.C. Interesting.

We have sick men in charge of two nuclear powers: Korea and the U.S. What does that mean for you ’n’ me?

Not very much, probably, other than that we’d better stock in several Costco-size rolls of heavy-duty tinfoil, the better to line our cowboy hats.

As a practical matter, even if a Korean missile does manage to get through America’s defense system — which is far from infallible — it would not wipe out all life in the city it struck. Go on over to Nukemap, enter your city and, under “yield,” select the most recent year for a bomb tested by North Korea. While a hit on an American city would not be good for its residents, nevertheless most American cities would not be wiped from the map. Far from it. Because of the vast sprawl characteristic of US cities, large parts of any metropolitan area would remain standing and inhabitable, particularly if residents had already taken some precautions or knew what to do in the event of a strike.

In Phoenix, for example, if a bomb the size of those available to North Korea hit at Central Avenue and Van Buren (conventionally regarded as the city’s central point, even though demographically it is not), the fireball would level most but not all of downtown. It would not extend as far north as Fillmore or as far south as Washington (these are within walking distance of each other). To the west, it would not quite reach First Avenue, but it would probably reach east to Second Street.

The radiation radius — the area in which you would receive a dose of radiation strong enough to kill you if you did not get medical treatment fairly soon — would extend north to the I-10 freeway and south to Lincoln: again: these borders are within walking distance of each other and certainly within walking distance of the theoretical detonation site.

The thermal radius — in which unprotected people would sustain third-degree burns — would go north to McDowell, south almost to Buckeye, not quite to 15th Avenue on the west, and over to 12th Street on the east.

This is not a very large area. Damage to the city’s small downtown would be catastrophic. Obviously, damage to closer-in central areas beyond the downtown district would be substantial. However, throughout most of the Valley, structures would remain standing. People who were indoors would be stunned, possibly injured by stuff flying around and windows breaking, but they would not be killed outright. Nor would they be in much danger of dying soon. People in the suburbs — the Greater Phoenix Metropolitan Area is larger than Los Angeles — could be unharmed. Even people within the city itself, which extends a VERY long way in all directions from Central and Van Buren, would be able to seek shelter and could, if adequately supplied, survive until help arrived from the outside.

This of course presumes a) that the Koreans would aim for the heart of the city and b) that their aim was accurate. Neither of those is reasonable. More likely they’d try to hit Luke Air Force Base, which is on the far west side of the Valley, almost to the mountain range bordering the western edge of the developed area. This would disable any jet fighters that were still on the ground (which is to say, all it would do is blow up the runway) and kill a lot of suburbanites. But otherwise, it would come nowhere near exterminating the population of Maricopa County. Or taking out the US Air Force.

The chance that they would hit their bull’s-eye is probably also slim. So for an individual who happened to be in the Valley when the Koreans decided to blow us up, what it means is…it depends. One’s survival would (as always, day in and day out…) depend on the luck of the draw.

But the larger portion of the population would survive, and a substantial number of those survivors would be relatively unscathed. So, we’re left with the question of how does one think about this?

What does one consider, as a practical matter and without lining one’s cowboy hat with tinfoil (which would be very hot in the summer), in terms of preparation? What should one have around the house to tide one over the initial period of chaos and danger?

First, if you live in a large city, you would have to assume that you would need to shelter in place for a long time. Getting out of the city could be impossible, with highways damaged and aggressive, panicked residents swarming what few roads remained open. Trying to drive out could be more dangerous than remaining in your home, school, or office building.

Thus it might be good to have some sheets of plywood or other product that could be used to cover broken windows — you can bet the glass would blow out if you were anywhere near the detonation. Duct tape to seal around the plywood would be useful, too.

Then you will have to figure out how to stay alive for a week or more, in the absence of electricity, natural gas, and police.

This will require the obvious prepper gear:

• Carboys of water (very cheap to acquire: just remember to pour your water onto your garden every week or so and replace it with clean tap water)
• Several weeks’ worth of food that can be preserved without refrigeration (dried or canned)
• An ample supply of food for your animals
• Propane fuel and devices that operate on it.
• A battery-operated radio and stash of batteries to keep it running
• A substantial first-aid kit
• Whatever medications you take
• A camp lantern and batteries or propane to operate it
• A small propane-operated camp stove (you may not be able to go outdoors to cook on a propane grill; a one-burner stove can be used safely for a limited period indoors, though it’s not something you’d want running for any length of time)
• Cash money
• Items that can be bartered, such as cigarettes, alcohol, grass, baby food, diapers, feminine supplies
• A weapon and stash of ammunition
• Extra gasoline for your vehicle

Leaving the city would be highly problematic. First, there’s the question of whether your vehicle would run at all. Some people imagine that all recent models of cars and trucks will be rendered nonfunctional by the EMP (a nuclear bomb releases an “electro-magnetic pulse” that can disable electronic gear and shut down an electric grid system). This, it develops, ain’t necessarily so. Your car might display some nuisance malfunctions but probably would run. The bigger problems would be getting out on gridlocked urban freeways and surface roads, and obtaining enough gasoline to drive to safety a long distance from a metropolitan area.

And, for that matter, finding safety. I’m old enough to remember those air raid sirens and bomb drills in San Francisco — we had a siren on top of our building, which went off every Saturday at noon. 😀 That’ll lift you out of your chair!

Back in the day, the city of Whittier, which stood astride what was then the main highway out of Southern California, announced that it would not allow itself to be overrun by hordes of unwashed Los Angelenos. To prevent that, they would block the road and man it with armed men. Anyone trying to get past the roadblocks would be shot and killed. And they weren’t kidding.

People do not act nobly during a disaster. You may be safer to remain in place.

But if you must take to the road, you will have to assume that you’re not going to be bedding down in some resort thrown open by the friendly proprietors. This means you will need a full set of camping gear, and it will need to be stored in such a way as to be ready to go on short notice. That is, you can’t be running around the house, the garage, and the attic to assemble your “go” package. So, you will need all of the above plus your “go” box of important papers, such as your birth certificate, passport, insurance policies, evidence of humans’ and pets’ immunizations, car registration, and the like. And cash.

I figure you’ll need, at a minimum, the following:

Commercially available first-aid kits are questionable. Better than nothing, but not good enough (look up the customer reviews on Amazon). You probably are better off to get a large workman’s lunch box or small briefcase and assemble your own. At a bare minimum, you’ll need this stuff:

See what I mean about not wanting to rustle up this stuff at the last minute? Gather the loot and keep it in a plastic bin, a backpack, or suitcase, so that you can grab it, throw it in the car, and get out fast.