FaM veterans will remember the late, great post on using olive oil to condition your hair. Believe it or not, that thing has had the greatest longevity of any post ever to appear on this site. It still draws comments from new readers every few days, after all these years.

Well, a recent commenter remarked that she discovered she could extend her moisturizing lotion by adding a little olive oil. Now there’s a thought.

I had an old bottle of Keri lotion laying around the bathroom closet. Hmmm….

The problem I have with just about any body moisturizing and conditioning lotion is that they don’t do much in Arizona’s parching dry climate. You can rub it on and ten minutes later your arms and legs look just like old alligator hide again. Some face creams work pretty well, but they’re way too expensive to smear all over your body. Olive oil alone, yes, will soften and diminish that powdery, craggy dry-skin look, but it’s greasy and too much of it makes you smell like a walking salad bowl. But what if you did mix a little olive oil with some body lotion?

Why not? thought I. So mixed a few drops of Costco’s best with a squirt of Keri lotion in a mise-en-place dish.

Mixing the olive oil into the lotion worked, but it caused the lotion to curdle a bit. That notwithstanding, it worked really well on my skin—went on smoothly, immediately moisturized and improved appearance—and the light scent of the Keri lotion overrode the olive oil aroma. Interesting.

So I decided to try it with a larger sample. Here’s how it went.

First, I filled a well washed old plastic container about halfway with several squirts of Keri lotion. Then splashed in a generous dollop of olive oil:

This move, it developed, was a bit too exuberant. The result, after beating the two together with a fork, was way too oily and liquid. So I added some more lotion.

The result, when mixed thoroughly, was okay. Not great, but okay. It still had too much olive oil, and as with the beta-trial, the lotion curdled in the oil.

The amateur cosmetologist’s kitchen, however, is never without resources. Out came the immersion blender and its little food processor bowl!

After a good whipping in the food processor, the new olive oil/commercial lotion skin conditioner came out looking like this: 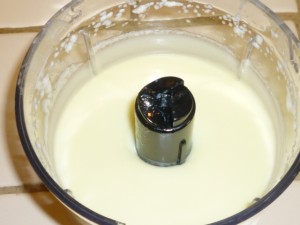 Hot dang! It’s creamy, light, and absolutely free of any sign of curdling! It goes on smoother, faster, and more generously than plain Keri lotion, and it does not make you smell like a salad chef!

Applied to the skin, the product does a nice job on the old-lady crepe. If you use it moderately—don’t get carried away with slathering this stuff on—it soaks in well and does not feel greasy. If you put too much on, of course, you feel like you just came out of the auto shop, but a little goes a long way. Apply it sparingly, and it works really well. The positive effect lasts a lot longer than the moisturizing effect of Keri alone.

Next time, I’d use a lot less olive oil. By carelessly splashing in a dollop, I think I started with about a 50-50 mix. Adding another squirt or two of Keri lotion didn’t help much–to get the right proportion, I would have had to add more commercial lotion than my container could hold. If you decide to try this, keep the ratio to about one part oil to three parts lotion, and maybe even less than that. It doesn’t take much olive oil to soften your skin. In experimenting, it looks like you’d do best to start with too little oil and add more slowly to reach the right combination.

But I’m kinda pleased with it! Not only does it make the elephant hide look a lot better for a lot longer, it’s even frugal: extending lotion with olive oil, which is a lot cheaper than commercial cosmetic products, has got to save money in the long run.

7 thoughts on “Enrich and Extend Your Moisturizing Lotion with…What Else? Olive Oil!”