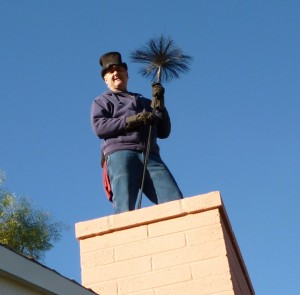 A chimney sweep in one of America’s warmest cities: Mark C. Keever is the second in Funny’s series of stories about entrepreneurs who find creative and unusual ways to jump off the treadmill.

I came across Mark and his business, Adirondack Chimney Sweep, in Angie’s List, where a long line of customers had left ecstatic reviews about his work. Not knowing whether the chimney in my 1971 house had ever been cleaned, about the beginning of December I gave him a call, hoping to have the job done before the big Christmas party.

Mais non! The man was booked into the beginning of January! A chimney sweep with personality, it develops, has more work than he can handle. When Mark dropped in the other day to apply his skills to my old fireplace, complete with his broom and old black stovepipe hat, I asked him a few questions.

FaM: Mark, how on earth did you get into the chimney-sweep business?

Keever: Well, I grew up in Queensbury, New York, a small town between Glens Falls and Lake George. Most people didn’t have much, and when you graduated from high school, your career choice was going to work in the paper mills or going to work in the local prison. Because people had to do for themselves, one of the things we learned in our shop class was how to clean potbellied stoves and chimneys.

In my senior year, I got in a motorcycle accident and was seriously hurt: broke my left foot in twelve places, broke my left leg, messed up my knees and elbows. That was the end of my future in the paper mill.

FaM: It must have kept you out of Vietnam, too.

Keever: That’s right. Couldn’t get into the military, either, because the damage to my foot made me unfit for combat.

FaM: So what did you do?

Keever: I came out to Arizona to recuperate and ended up going to work for the Greyhound Corporation. I worked for seven years, and then I went with the Southern Pacific Railroad. That was a good job, but after four years I was laid off—along with about 9,000 other people.

Not knowing what to do next, I looked around and found out that one in four houses in the Phoenix area has a fireplace. Well, that was a natural: I already knew how to sweep chimneys.

I started a business, but by the time we were up and running, it was out of season. Nobody thinks about their fireplaces on a 110-degree summer day. So I was really struggling.

To make ends meet, I decided I’d better take a full-time job with the City of Glendale. I was happy to get the job, but I kept the chimney-sweep business as a sideline.

And I also thought I’d better go to college to learn how to run a business, so I enrolled in a business course at Phoenix College. It only took me 25 years to finish my associate’s degree!

Meanwhile, I kept on working at the city and also kept sweeping chimneys as a side job.

FaM: It’s always a good idea to have a second income stream, isn’t it?

Keever: Yes. I was glad I had it, because last spring the city offered its employees a buy-out deal. I had only just earned the 80 “points” city and state workers need to retire, but there they were: I actually was in a position to retire. I thought it over for a while, and then finally I decided to take it.

So I got a good severance package and plenty of time to make a go of Adirondack.

FaM: That must have been a breathtaking moment!

Keever: I’ve never been happier! No more stress of a day job and a commute, no more working for a big bureaucracy. I’ve got all the work I can do, most of it in the wintertime while the weather’s nice, and the business has really taken off. All told, Adirondack Chimney Sweep  has had 2,187 customers.

Cleaning the fireplace, a two-and-a-half-hour project, entailed climbing on the roof to brush out the chimney and then engaging in some lengthy and vigorous cleanup with a large shop vac. By the time Mark finished, the firebox and the family room were spotless.

He sprinkled a handful of salt at the back of the firebox. “This brings good luck,” he said. Then he set a shiny copper penny in the front right corner of the fireplace. “A penny in the fireplace not only brings more good luck,” he continued, “but because it’s this year’s date, all you  have to do is look at it to remember what year you last had the chimney cleaned. This one should be cleaned about once every four or five years.”

After a short demonstration of how to lay a fire and how to use a newspaper torch to warm the cold air seeping down a chimney to make the flue draw better, he was off.

And the next time that thing needs to be cleaned, I know who I’m gonna call!