No, this doesn’t mean a Gloria Steinem moment of insight into the Oppressiveness of the Masculine Culture. By *CLICK* moment, I mean a why didn’t i think of this one before dawning of the light.

I’m sitting here contemplating the damn car and realizing that it’s so alien that trying to operate it is like trying to drive a flying saucer. In the 15 years between the time I bought the late, great Toyota Sienna and the time I got bamboozled into buying the endlessly annoying Toyota Venza, cars have changed so much that I truly don’t know how to drive anymore. 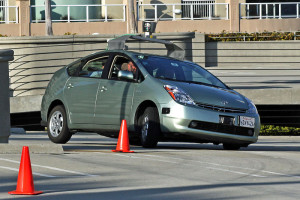 Out of the blue, it struck me that what I need here is driving lessons. I need to learn to drive again, the way I learned to drive in high school: with a driving instructor sitting next to me in the front seat.

Turns out there are driving schools here in lovely uptown Phoenix. They’re not cheap: instruction runs from $250 for a single three-hour drive to $645 for 16 to 18 hours of instruction. For an extra $250, you can get some sort of “MVD evaluation waiver” that apparently gets you out of some harassment of senior drivers by the state.

I have to renew my driver’s license this spring, as well as get the national ID card. This will be a major PITA if I’m required to prove I can still drive…especially since driving this goddamn car is like trying to drive a flying saucer.

Yesterday I did chat with Wonder-Mechanic Chuck and his guys about the idea of trading the Starship Enterprise in on a Subaru. They thought that was a less than perfect scheme. Chuck says all newer cars are now pretty much the same: brain-banging frustrating and complicated to learn.

Soooo….oh-kayyy…. If the problem is that you need to learn how to drive all over again, wouldn’t the logical solution be simply to do what you did in high school: take a driving course?

Here’s an outfit that employs retired law enforcement officers. By golly! What could be more perfect?

So I emailed them and hope to hear from them on Monday.  While I’m not thrilled at the prospect of forking over $250 to learn how to drive all over again, as a practical matter I can afford it…and it would be worth it if I could get an experienced driving instructor to help me get acclimated with the Brave New World of driving technology.

Yesterday morning I realized that what I need to do is ONE. THING. AT. A. TIME. That is, don’t try to set it up with all its glorious functions in one swell foop. Instead, engage only one function at a time.

So: yesterday I plugged it in. I did NOT plug in the beloved CPR Call Blocker. Just plugged the damn phone and its handsets into the phone line and the electric line.

This alone took some doing. But without trying to connect the Call Blocker device, the system works fine. I think. When I call the land line number on my cell phone, it does ring through. And I’ve been able to talk with SDXB and with WonderAccountant…so apparently the basic function now works.

Today I succeeded in figuring out how to program often-called numbers into the “phone book” function. PITA of the first water, but it does seem to work. I think.

In addition, it appears that the Panasonic’s built-in call blocker also works, in much the same way. But how it’s doing that without my having programmed it escapes me. I’ve only received one nuisance call in the past two days; normally upwards of a dozen come in. That may just be coincidence…though I haven’t had a day without an unending series of pest calls in many, many months. Years, actually.

If it develops that this is just a fluke, then on Monday I’ll call the CPR folks — they have killer customer service!! — and ask how to get the thing attached to the CPR device without disabling the phone itself.

So of those two frustrations — car and phone — I feel a little better about one of them. As for the car, we shall see whether this driving school outfit will let me use their three-hour training class as a device to learn how to drive all over again. They say they have a special class for “seniors,” which leads me to suspect this will not be the first time they’ve encountered my little learning challenge.

6 thoughts on “Ever have one of those *CLICK* moments?”