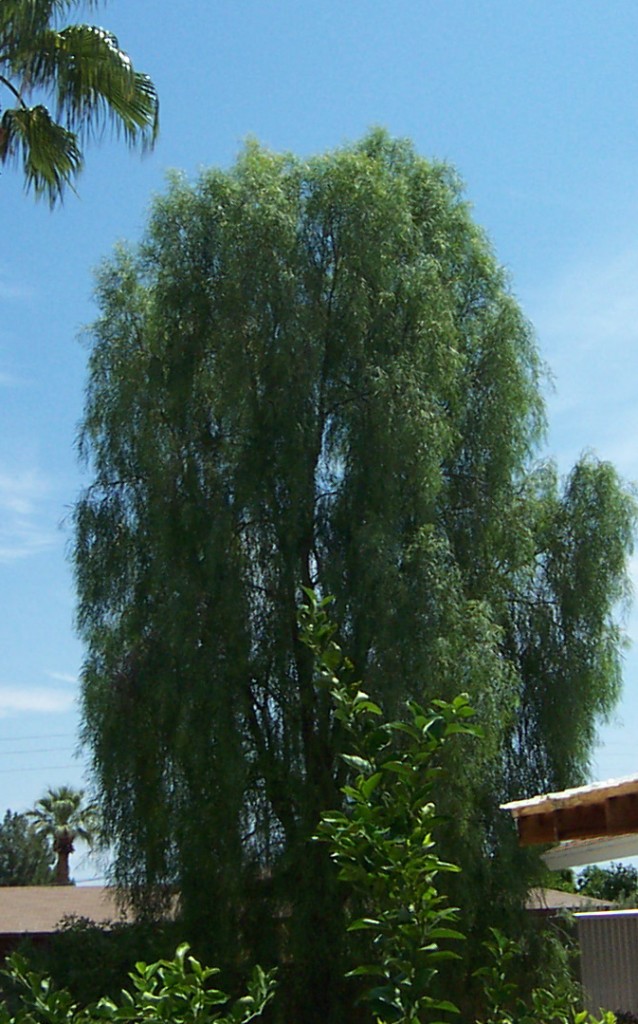 One of the Funny Farm’s sources of eternal labor is the Devil-Pod Tree, a vast weeping acacia planted in the backyard, just upwind of the swimming pool, by the previous owners Satan and Proserpine. This unholy plant, now a couple of years older than it was in the photo to the right, towers three times as high as the roof.

And it sheds stuff. It sheds stuff All. The. Time. All year round, I haul bushels of crud from that tree out of the pool.

And I finally figured out why the pool water is as acid as pickling solution, when I never add a drop of muriatic to it: Acacia trees poison the soil around them by dropping highly acetic debris on the ground, thereby discouraging competition from neighboring plants. So much crud from that damn tree drops in the pool that not only do I have to dump in PhosFree by the gallon, it turns the water to vinegar.

This week I had just replaced the pump pot basket that split in four pieces from the weight and pressure of being clogged by Devil-Pod pollen, had just drained the acid water out and refilled the pool with 18,000 gallons of treated city water, when another rainstorm came in. Not much wind: just rain, mostly fairly gentle.

So much of that pollen crud floated into the drink that once again both the pump pot basket and the skimmer basket were packed so tight the pump could barely push water through them. A great mound of pollen accrued in a pollen dune on the bottom of the pool. Before I could shock-treat and condition the new water, I had to get all the crud out. Again.

Last night the skimmer basket was perfectly clean. By the time the arborist—ah, yes, the arborist!—showed up along about 3:00 p.m., it was more than half full of packed-down pollen. Again.

To frost the cookies, the tree is right next to the house. Like other acacias, it has a reputation for dropping large branches onto (and through) roofs. What with the now-unmistakable climate change, the winds get fiercer here every summer. Matter of fact, as I write this, a stiff breeze is blowing. I’d just as soon be rid of the tree before it lands in my bedroom.

What has given me pause about taking that tree down—other than the slight amount of shade it casts on the northeast corner of the house and my general reluctance to kill plants, especially trees—is the potential cost. Neighbors around here have had house-dwarfing trees removed, to the tune of around a thousand dollars.

It is, he says, not a tree he recommends to his clients. Too bad he wasn’t here to restrain Satan and Proserpine from shopping at Moon Valley Nursery, where the staff specialize in high-pressuring people into buying “packages” of “bargain” trees that are totally inappropriate for their yards.

He offered to take the damn thing out for $350.

I couldn’t believe it! So, that is a job that is SOLD! For another $150, he’ll trim up the people-eating palo brea in front, untangle the jungle formed by ongoing battle among the palo brea, the olive tree, and the vitex, and do a little other light cleanup.

For privacy, he suggested orange jubilee. Those things are, however, pretty frost-sensitive around here. My inclination is to go for something like a Lady Banks on the outside of the east wall and maybe a Mexican bird of paradise on the inside. Lady Banks will hold up against the cold weather and gets huge enough to block the view of idle passers-by, while Mexican birds are very pretty and call hummingbirds. There might even be room in that space for a little creosote bush, which emits a lovely scent every time it rains.

Three hundred and fifty dollah! What a bargain…that’s going to be a large, difficult job.

5 thoughts on “Exeunt the Devil-Pod Tree, Pursued by a Chain-Saw”