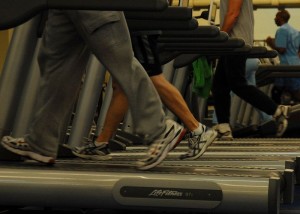 Life on the treadmill

We’ve been talking, on and off, about routes to financial freedom, defined as a life off the day-job treadmill that leaves you free to do what you want to do with your time, not what someone else decides you should do. It takes time to achieve this freedom. You need get enough education or vocational training to land a job that will produce enough income to allow you to build some savings, and you need to live not only within that income but below it. An important part of your early-escape strategy is to get a roof over your head that’s paid for.

Yes. Pay off your mortgage.

In some circles, that’s tantamount to sacrilege. But the fact is, the largest chunk of cash flying out most people’s doors is the mortgage payment, and most of that payment consists of interest. The putative income tax break, if you look hard at it, is negligible compared to the amount of money that goes down the toilet in the form of loan interest. Mortgage interest can more than double the amount you end up paying for your house.

If you have a program like Quicken, it’s easy to figure that amount. Using the loan calculator, enter your principal, the interest rate, and the number of months to pay-off, and the program will generate an amortization schedule showing, in detail, how much each payment reduces the principal and how much, in total, you will have paid by x or y date. You can accomplish the same calculation, though, with Excel or an open-source spreadsheet. Over at The Simple Dollar, Trent provides an easy step-by-step guide to setting up your own loan calculator in Excel.

If he were paying toward rent instead, that also would be money down the toilet: the renter puts money in someone else’s pocket with no hope of ever owning anything and no end to the outgo. At least when you buy a house, you have a chance of paying it off and putting a roof over your head that costs you little or nothing, from day to day.

(It must be noted, though that owning your house is never free. You still will owe taxes on it, and you’re crazy if you don’t buy insurance. Maintenance and repair costs can be significant. These expenses require most mortgage-liberated homeowners to self-escrow something each month in an account to cover such costs.)

The key to bumhood is getting out of debt, and that includes mortgage debt. A thousand bucks (or more) that stays in your pocket each month represents a large fraction of the amount a bum needs to live in comfort and contentment. Given that a person who lives modestly in a city with a reasonable cost of living really needs only about $2,000 to $3,000 net a month, a thousand dollars gets you a third to half-way there!

So…how on earth do you go about doing this? The cost of a house is crushing. What human being can possibly afford to pay for one in full in anything less than an adult lifetime?

Well, I suspect most people can. Here’s the strategy:

1. Buy a house that’s within your means.

Where is it written that you have to live like Pharoah? No one really needs a McMansion. Many smaller houses offer charm, comfort, decent neighborhoods, and ease of maintenance.

If living in a prestigious district is your thing, look for middle-class neighborhoods that border fancier areas. My house, for example, is in a very ordinary neighborhood that abuts a district of million-dollar homes, two blocks from a lovely park. Obviously, if you have kids the school district is important, and so you’ll need to add that consideration into your calculation. It’s worth investigating whether sending a child or two to parochial or private school might actually be cheaper than buying a more expensive house in an area with top-rated public schools, especially if you can qualify for scholarships or tuition assistance.

2. Get the shortest conventional loan you can manage.

Because interest rates on a 15-year loan are lower than those for a 30-year loan, the payments are not that much higher. For example, with a 6.5 percent rate on a 15-year loan for my original $100,000 home, the principal and interest would have been only $128 more than what I was paying toward the 30-year instrument.

Never take on a variable-rate mortgage. Adjustable rates always adjust upwards. Even when the prime rate goes down, banks find excuses to raise the mortgage payments.

And, given the communal experience of the past couple of years, we know never to accept anything “creative” from the loan department.

Even if you have a 30-year loan, you can speed the payoff date by paying down principal each month or, if you’re paid semiweekly, by applying some or all of your so-called “extra” paychecks to principal. Another strategy is to apply all of one spouse’s net salary to principal, if you can afford to live on one partner’s income.

The downtown house, for example, cost so much that there was no way we could have made payments on a 15-year basis. However, if we added $130 a month in principal payments, we would pay the house off in 24 years instead of 30. Applying all of his roommate’s $400/month rent payment toward principal would pay the loan in a little over 17 years. Combine the two—$130 out of our pocket and $400 from the renter—and we could kill the loan in 15 years.

4. Build side income streams and apply that money to principal.

A spouse’s salary, a second job, a roommate, a hobby monetized: all these sources of cash can be used to pay down the mortgage. Because lowering principal cuts the interest portion of future payments, it’s helpful to pay extra toward principal on a regular basis (whether it’s monthly, quarterly, semiannually, or even just once a year). But no law says the extra payments can’t be sporadic. Whenever you get a chance to earn extra money, take it, and then use the net to pay down the loan.

5. Apply all windfalls to principal.

I paid off my first house by saving every post-tax penny of spousal support (having lucked into a decently paid job) and investing it. About five years after I bought the house, I used the cash I’d saved plus a small inheritance to pay off the mortgage.

Was it easy to break a chunk out of my savings to throw at the house? Nope. Have I ever regretted it? Nope.

It probably was the smartest thing I ever did. Once SDXB moved out, I could not have paid the PITI and survived on my net income without a roommate or a domestic partner, neither of which was in the cards. The house’s value continued to grow, so that when I was ready to move to a somewhat nicer house in a quieter corner of the neighborhood, I could pay for the next place in cash. And when I was laid off my job, there was no worry about whether I would lose my home.

Purchase with an eye to staying in the place permanently. That’s right: for the rest of your life. Consider whether the neighborhood is likely to remain stable or even improve over several decades, and whether the construction will stand the test of time.

Remember, your house’s value will increase in lockstep with all the other real estate in your area. While the place may appear to double in value over 15 or 20 years, so has everyplace else! This means that if you’ve paid off your mortgage and you want to avoid taking on new mortgage payments when you move, you’ll have to buy a comparable house. Paying off a mortgage means that you’ll be living in similar housing forever, unless you’re willing to take on new debt.

As you can see, this project entails some trade-offs. Unless you earn a ton of money, you likely will not be living in an elegant palace. To get into a decent school district, you may have to take a lesser house than you could have afforded in a neighborhood with weaker public schools. And you’ll need to seek contentment and ego gratification from sources other than real estate, downsizing your housing expectations to fit your long-term goal.

Freedom’s not free. But it’s worth it.