Having run low on craft projects, I’ve decided to change the Friday department to recipes and cooking posts, something I’m never likely to run out of.

Last weekend I made an awesome boeuf bourguignon for some friends. It was mighty pricey: about $45 for all the ingredients. But so far, that roast has yielded 12 servings…and counting. The guest meal was wonderful, and every leftover variation has been really good, too. So, I thought I’d share the original recipe with you. Next week: all the meals that came out of it.

This recipe is not hard to make, but it requires a half-day to cook. So, plan to be around the house while it’s simmering.

First, place the bacon in the saucepan with a couple cups of of water. Heat the water to a simmer; allow to simmer about ten minutes.

Meanwhile, wash and cut up the carrot, onions, and tomatoes. Peel and chop the garlic. Set aside.

Drain the bacon. Dry it in paper towels. With a sharp knife, slice the fat away from the meaty part of the bacon strips. Slice the fat into thin pieces.

Dry the saucepan. Skim the bottom with a little olive oil. Place it over low heat with the meaty pieces of the bacon. Let the bacon meat cook slowly while you’re doing the next step.

Rinse the roast and dry it well with paper towels.

Cut the strips of fat into one- or two-inch long pieces. Take your knife and punch a hole in the meat, and then with the tip of the knife gently push a strip of bacon fat into the roast. Be careful not to cut yourself.

Repeat this until you’ve worked the bacon fat into holes all over the meat, top, bottom, and sides.

Keep an eye on the cooking bacon meat while this is going on. When it’s crisp, turn off the heat and set the saucepan aside with the bacon and cooking grease in it.

Pour enough olive oil into the big frying pan to skim the bottom. Place the pan over medium to medium-high heat, warm the oil, and then brown the meat on both sides. After you’ve turned turn the meat to the second side, add the cut-up onions and carrots. Stir around as the meat continues to brown. After they seem to be cooking, add the garlic.

When both sides of the meat are nicely browned, pour in about three-quarters of the bottle of wine. Add enough beef broth to just cover the meat. Add the tomatoes, the orange peel, the thyme, and the bay leaf or rosemary. Stir in a heaping tablespoon of tomato paste.

If the broth is not simmering, leave the heat on medium-high until it comes to a simmer. Then turn the heat down so that the pot will stay at the simmer. Cover the pot and go away.

Depending on the size and the cut of the meat, cooking should take two to four hours. After about 90 minutes, check every 15 or 20 minutes for doneness. The finished meat should be tender but preferably not disintegrating.

While the beef is cooking, wash and dry the mushrooms and cut off any tired-looking ends of the stems. If they’re very small, leave them whole. If they’re more than an inch or so in diameter, slice them in half or quarters lengthwise. Peel the onions (an easy way to do this is to drop them into a pan of boiling water for a minute or two, then drain them into a colander and cool quickly under cold water), slice off each end, and cut a cross into the root end of each onion. 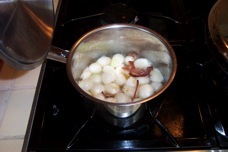 Take the onions and place them in the saucepan you used to cook the bacon meat. Place the pan over medium heat and gently stir the onions and fried meat around for a couple of minutes. Add about ½ inch of water to the pan, cover, and simmer for a bout a half-hour, until the onions are just tender when pierced with a knife. Set aside.

Pour some olive oil in a clean frying pan and place over medium-high heat. When the oil is hot, add the mushrooms. Stir or toss the shrooms until they’re lightly browned, around five minutes or less.

When the meat is done, take it out of the pan and set it on a serving plate.

Meanwhile, place a large strainer or colander over a large bowl, and pour the pan juices through it. Push the juices out of the vegetables, and then discard the vegetable residue. Pour the juices back into the pan, and place the pan over high heat on the stove.

Allow the stock to boil down about 50%. If desired, add a little more wine or tomato paste, or both. Herbs can also be added-more thyme, a bit of marjoram, a dash of lavender, whatever you have at hand. When the stock has cooked down to about three cups, lower the heat.

If you wish to thicken the stock with sour cream, wait until you’re ready to serve the meal. Then reheat the stock gently but do not bring it to a boil (if it boils, the sour cream will curdle). Stir a few tablespoons of sour cream in to thicken a bit. This is useful if a guest is sensitive to gluten. To serve a gluten-free meal, substitute potatoes or rice for the pasta.

But if everyone can eat flour, the classic way to thicken this sauce is with a beurre manié. Take equal parts of white flour and room temperature butter and mash them together. One or two tablespoons apiece will probably do. With the broth simmering vigorously, stir pieces of the flour-butter paste in a little at a time, stirring until the sauce thickens. Taste the sauce; season with salt and pepper if necessary.

Place the meat back in the sauce and add the onions and mushrooms. The roast can be served immediately or may be set aside and reheated later.

Slice the meat and serve with the sauce and noodles (or other starch). A generous green salad will suffice for vegetables and extra color.