Yesterday I finished cleaning out the bedroom closet. Donated a pile of old clothes, so as to make room for the new shirts I bought and ended up feeling about 10 pounds lighter. Something there is about divesting oneself of junk that improves your mood.

This task led to some reflections on frugality, as I suppose it must for all of us. Whenever you get into a closet or storage shelves, you think about the stuff you bought, how you used it, and how you didn’t use it. And over time, you develop a set of unconscious rules governing what you buy and what you do with it. Hence…

Don’t buy it if you’re not gonna use it.

This is no doubt the most challenging of the Frugal Rules. The whole (profitable) principle of the impulse buy is predicated on the fact that if you look at something and think “Oh! That’s neat,” you’ll buy it whether you need it or not. To combat this lure, slow down.

SDXB, the all-time Master of Frugality, had a shopping technique that worked to address the “what do you need this thing for” issue. As we perambulated through a store, something would catch his eye. Sometimes this was just an interesting item; sometimes it was something he was shopping for. But rather than grabbing it off the shelf and tossing it into the shopping cart, he would stop and pick the thing up. He would turn it over in his hands. He would assume a contemplative air. He would study the item. Then he would set it back on the shelf and go on about the rest of his shopping.

After he’d loaded up the cart with stuff he knew he wanted, he would return to the object in question. He would pick it up again. He would turn it over in his hands again, inspecting every aspect of the thing. He would stand there (interminably!) and think on it. About half the time, he would buy it. The other half of the time, he would put it down and walk away.

So, the corollary of Rule 1 (Don’t buy it if you’re not gonna use it) is take your time.

If  you do buy it and you don’t like it, use it anyway.

Probably the second most difficult Frugal Rule. Sometimes we buy things and realize we made a mistake. The reasonable thing to do in that case is to take it back — which you should, if you can. But some things can’t be returned.

Case in point: four fake-feather pillows I purchased awhile back at First Tuesday.

My down pillows, which had resided on the bed for years, had gotten pretty beat up. I decided to buy some new ones and, against my better nature, decided to buy synthetic by way of beating back allergies. (Note that I did not evict the dogs from the bed, suggesting that I wasn’t very serious about this anti-allergy scheme.) I bring them home, stuff them into the pillowcases, and toss them on the bed.

Come bed-time, I try to sleep on these beanbags. Ugh! They were so uncomfortable that no amount of trying to get used to them — and I tried for a couple of weeks — made them tolerable.

Ultimately, I ended up traipsing to Costco and buying four down pillows, making this the most expensive purchase of cheap feather pillows in the history of personkind.

I didn’t throw away or donate the pillows, though. Instead, I’ve stashed them for the use of guests. If one day I get around to putting a twin bed in the spare room, I’ll buy or make some shams and use the beanbags as decorative pillows in there. For the nonce, they’re on the top shelf of the bedroom closet, wrapped in an old throw to protect them from dust.

Use it up, wear it out, make it do

When something starts to show signs of wear, don’t throw it out. Fix it. 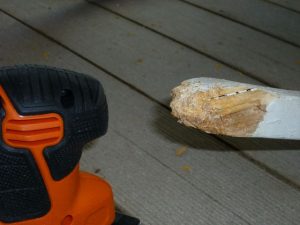 Ruby the Corgi Puppy chewed the ends off one of my outdoor wicker rockers. Did I throw it out and buy a new one? Hell, no. I sanded the rockers down and spray-painted them. Again.

These rockers are about 20 years old. In fact, I doubt if you can even buy real wicker rockers anymore — they’re all that weather-proof plastic stuff. Practical, I suppose. Expensive, for sure. And uncomfortable. About every three years, I spray those now-antique rockers with another layer of white paint. In between times, I drag them indoors when it looks like rain.

Similarly, the accursed Samsung washer punched holes in my pillowcases (this was before it ripped two sheets lengthwise…). The cases came with a set, so I couldn’t easily run out and buy new ones. Nor could I afford to: pillowcases are darned expensive. So I embroidered a couple of primitive flowers over the holes. 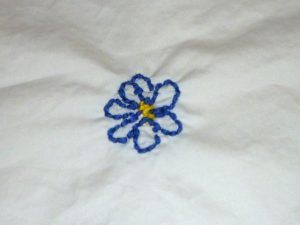 One of the holes has managed to escape the stitching, so pretty soon I’ll have to buy a new set of Costco sheets. But in the meantime, the patching job extracted an extra year or two out of the damaged sheets.

We visited this subject the other day, when I held forth about the pricey shirts I recently bought, which I expect will last several years. Among the pile of stuff I donated yesterday was an Eileen Fisher top that was still perfectly usable. I decided to get rid of it because it makes a Boobless Wonder look even more curiously flat than necessary, even though it still had a fair amount of wear left in it.

I bought that shirt while I was still teaching. Since I moved into administration in 2004, that means the shirt is thirteen years old, and still usable. Yes, I paid a lot for it — though I got it on sale. But it seems to have paid for itself by not wearing out.

Buy something, get rid of something else

This was the principle driving yesterday’s Great Closet Clean-Out. And as a matter of fact, I got rid of considerably more than the five new items I installed in the closet. About twice as many, come to think of it.

If you have nothing that you want to get rid of, then presumably you don’t need anything new. So…don’t go out and buy stuff you don’t need.

I’d bought some heavy cream in a one-pint returnable glass jar. A rather handsome little glass jar, come to think of it. Just about the right size to hold a week or two’s worth of home-made salad dressing.

Not bad. I might not even be too embarrassed to haul that out in front of guests. 🙂

If you can make it cheaper or better than you can buy it, make it

Salad dressing is ridiculously easy to make, and home-made tastes so much better than the commercial stuff, there’s no comparison. The basic principle for vinaigrette: one part sour stuff (lemon juice, lime juice, vinegar) to three parts oil of your choice. Add flavorings of your choice. Or not. The above?

1/4 cup lemon juice
3/4 cup olive oil
1 clove garlic, chopped
about a tablespoon mixed dried herbs (I used fines herbes, but herbes de Provence or anything else to your taste will work just fine.

You can make your own window cleaner far more cheaply than Windex and its knock-offs cost, and it works as well or better. Take a squirt bottle; fill it about 1/3 to 1/2 full of rubbing alcohol. Add 1 tablespoon (or so) of ammonia. Fill the rest of the way with water.

IMHO the best of all money-saving habits is simply to cook your own dinner. Why go out to eat when you can fix far better food yourself for a fraction of the price?

Don’t know how to cook? Not an excuse: Buy my cookboook! 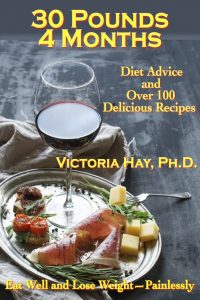