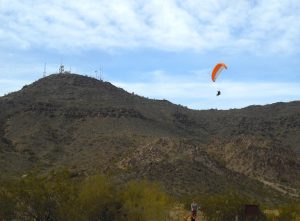 In pursuit of a fine score on next week’s proposed stress test, it was off at the crack of dawn to climb Shaw Butte, a small “mountain” just to the north of the ‘hood. In most parts of the country, people would call these little mounds “hills.” But here, we think of them as key parts of the Phoenix Mountain Park.

Well, the trail is billed as 4.4 miles, but I’m pretty sure that means the entire loop, from one end off Thunderbird Road, over the top of Shaw Butte and down the back of neighboring North Mountain; then out at Peoria Avenue or else back around the base of the hills to return to Thunderbird. The typical walk, though, is from the parking lot to the top and back. I’d guess this is about two miles.

Parts of the trail are somewhat steep — not as much so as the scrabbly uphill in behind North Mountain, but enough to provide a workout. Some guy’s dog had collapsed with exhaustion as I passed by — probably because the human had been too stupid to bring enough water for the animal. Most people don’t realize how much water domestic dogs need in this climate, or how vulnerable they are to heat exhaustion.

No heat today, though: at dawn it was fairly crisp up there.

Bear in mind, it’s been years since I’ve walked on that trail.

I got all the way to the freaking top without stopping!!!!!!!

The last time I tried to hike to the top of Shaw Butte when I was out of shape, I had to stop three times to gasp for air.

How, you ask, did an old bat like me pull that off?

By gaming the mountain…

1) Diaphragmatic, deep breathing. You learn it in choir. And this is the device used to make blood pressure readings drop, too. Starting on the flat right off the parking lot, I started breathing steadily and deeply from the diaphragm. Continued all the way up the side of the hill.

2) On the steepest parts: the rest-step. Actually, I call this the rest-trudge… It’s something I learned while hiking in the bottom of the Grand Canyon with an Arizona Highways photographer, who was toting 50 pounds of large-format camera equipment. The rest-trudge entails stepping up-hill and then locking your knee and putting all your weight on that leg as you swing your other leg forward and upward. It creates a brief rest for each leg as you move up the hill, allowing you to go practically forever without feeling tired.

In the past, the rest-step alone was not enough to get me all the way to the top of that pile of rocks without having to stop, unless I was in pretty good shape. But combining it with the deep breathing, at no point did I feel I needed to stop. Nor at any point was I ever panting.

And when you consider how magnificently out of shape I happen to be just now, that’s pretty amazing.

It took about an hour and a half to get up there and back down. I wasn’t trying to beat any speed records…on the flat, it would take me about 25 minutes to walk two miles. Dog-free, that is.

Heh heh heh…. If it works on a mountain, it surely will work on a treadmill. You may be sure I’ll be using the deep breathing technique during that supposed stress test.