In the GOOD THINGS department… Have you ever noticed how little disasters seem to lead to large benefits? Why is that, d’you suppose?

Case in point today: the busted tooth disaster. How did I NOT want to have my muzzle cut open to remove that broken tooth? And how did I TOTALLY not want to pay out my entire goddamn year’s tax refund to an endodontist for the privilege? Let me count the ways…oh, wait! I can’t count that high.

With that cracked fang out of there, the mouth doesn’t hurt annnnyyy more.

That is correct: no pain. Zero-point-zero-zero twinges, stabs, or aches.For the first time in a couple years, I can chew on that side of the maw…and did you know your taste buds are different, one side of the tongue from the other? Yeah: food tastes different (read BETTER) when you can munch it on the other side of your mouth.

Yet another benefit of the Battle of the Busted Tooth: whilst convalescing, I learned about Pacific boxed soups. Not that I hadn’t tried a few of them. But canned (and by extension, packaged) soups are not my cuppa. My experience with canned soups and broths has been that they’re oversalted and they taste of industrial chemicals. 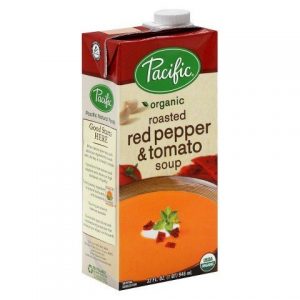 But I had to eat something. One of Funny’s readers had recommended the Pacific brand, so I picked a variety of them at Sprouts.

These things taste like REAL SOUP. I mean, they taste like that soup would taste if I’d made it myself, upon mine own stove.

The tomato soup… What? It seems to have…well…tomatoes in it. The sweet potato ginger Thai soup? To DIE for.

What? Today, after having had a lovely and interminable morning farting with the computer, I finally rose from the chair into which I had been frozen along about 11 a.m., starved and craving a ration of strong drink. Remaining in the cupboard: a little box of Pacific brand lentil soup.

Dump into pan. Add a little chard. Heat. Zing up with a squeeze of lemon. Use it as an excuse to pour a glass of wine. And…

Dayum! How do they do that? Once again, it actually tasted like real lentil soup. If I made a giant pot of lentil soup, it would taste just like that.

In other precincts, check out this little post at Quora: it’s garnered 242 “likes” since I put it up just a few hours ago. Probably because it’s kind of funny. Stupidly hilarious, we might say, if we were cynical enough…

In the Dumb Things department: might as well ’fess up: I just do not have it anymore when it comes to techno-talent.

Yea verily. Back in the Dark Ages, I was ahead of the wave. Always on top of the computer revolution. And all that bullshit. But today: I do not care soooooo much that I can’t remember stuff I learned and knew and used for years.

Last night I set up the first raft of FREE READS Fire-Rider stories to post automatically starting about 7:00 this morning. There. All done. Nice, eh?

Well. It would be if I were still even faintly competent with computers.

Arrrghhhhh….. Yea verily, I failed to remember this basic factoid — i.e., the computer universe is unstuck from reality every which way from Sunday, which in computer land is the last day of the week, not the first day. So when I got back from this morning’s wee-hours doggy-walk, I found that the first few posts had appeared…bass-ackward.

So I had to sit down and repost every goddamn entry, with the first entry to go online last, so that it appeared at the top of the queue…

THEN…then I discovered that for the life of me I can. not. remember. how to build a widget.

Worse yet, I do not want to know.

Absolutely positively not. I do. fucking. NOT. want. to track that BS down and relearn it!

See why I don’t own a smartphone? Because I do not want a damn telephone that’s smarter than me, that’s why.