This morning the beloved swimming pool finally got a good cleaning and backwash. The yard is a disaster area: things dying, things falling apart, trash piling up, algae decorating the pool walls. Between a searing hot and dry summer and a full year of Adventures in Medical Science — surgeries on average of once every two months — I’ve neglected the house and the yard shamefully.

Gerardo has kept the worst of it at bay, but he only comes around once a month. And he knows exactly nothing about swimming pool care. On the few occasions that I’ve drafted him to help with the heavy pool work, I’ve had to teach him step-by-step what to do. He looked flamboozled by the whole affair!

And he doesn’t do tree work.

The lime tree, silently running amok unnoticed by the ailing human, has grown up against an eave and is resting its limbs on the roof.

Luis, a lovely gentleman and true artist with trees whom I ran into by serendipity while walking the hounds, is coming by this afternoon to deal with that quiet disaster, and also with the Meyer lemon that’s trying to take over Philadelphia.

The heat has been so unremitting and so extreme, even plants that don’t ordinarily mind an Arizona summer are dying. The bougainvillea on the wast side are struggling, even though they’re sheltered to some degree by the gigantic paloverde. A good half of the potted plants died, in spite of daily watering.

The other day I decided I’d better get off my duff. I’ve carted away a lot of the dead potted plants — more remain to be attended to…later! 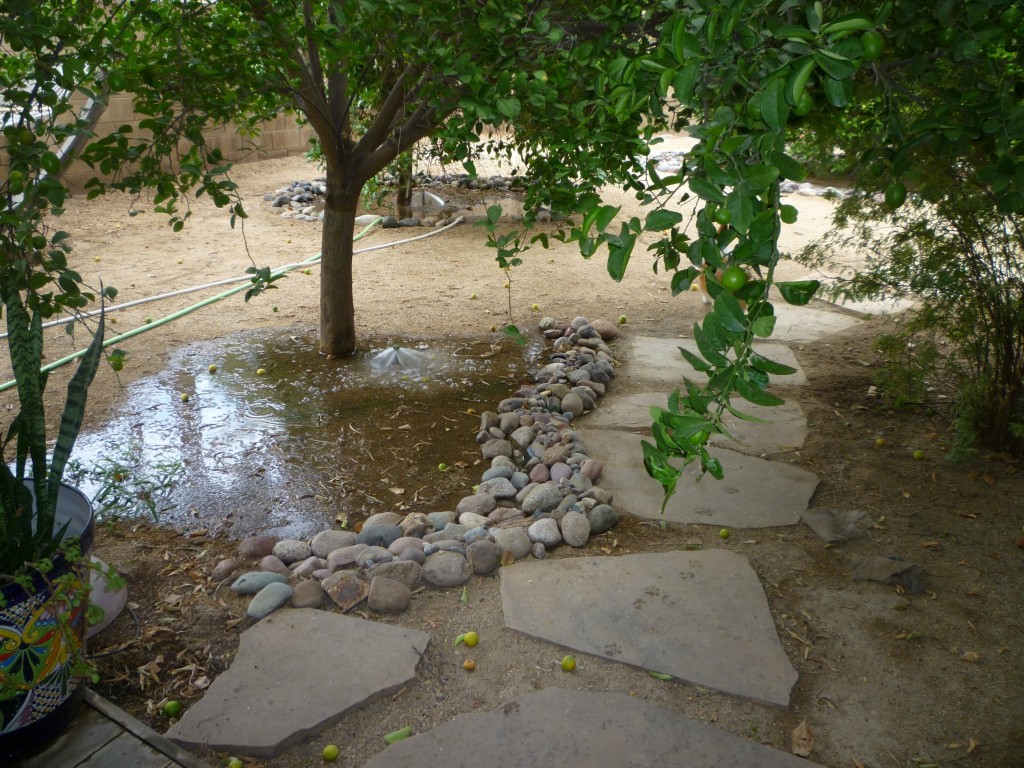 Unlike the two orange trees, the lime tree has never had a berm around its base. That’s because the flagstone walkway there was in the way. And really, letting the irrigation pool up into a puddle against the tree’s trunk is not very good for citrus.

It doesn’t seem to have harmed any of the other trees, though.

Without a berm, the irrigation water has flowed down a slight grade from the tree to the northwest corner of the house, where it merrily soaks into the soil around the foundation.

This is singularly bad for a house’s foundation — certainly around here, where much of the soil consists of caliche, which expands like a sponge when it gets wet.

It’s bothered me for years, and in fact has caused some damage to the wall in that corner — inside, around the fireplace’s big wall-length hearth, cracks now need to be repaired and disguised with paint.

So the other day I finally bestirred myself to build a little earth dam across the flood plain. Didn’t run it all the way around the tree, first because I don’t have that much energy (the tree is so overgrown I can’t stand up under there and so have to hunker down and crawl around), partly because a berm that circumnavigates the tree would block passage from the west to the north side of the house and would certainly preclude rolling a wheelbarrow back and forth.

Anyway, the above is the result: you can see that it works (!!) to kep the water away from the house.

This afternoon, I hope, Luis will trim the tree back enough that humans can walk back and forth. For which, I expect, Gerardo will be grateful.

The beautiful and much beloved climbing roses on the back number among this summer’s casualties. I don’t know if they’re dying or just suffering. Quite a few canes are dead, and the little foliage that remains is sickly and burnt-looking.

Roses will suffer in the summer here. These two usually do OK because they’re shaded by the paloverde and the weeping acacia. But…climbing roses don’t live forever. I suppose they could be nearing the end of their lifespan. Some tea roses last only about 10 years, although they say species of climbers can live for 50 years.

The horrid paloverde beetles came back, despite my mistaken belief that the beneficial nematodes had done them in. They emerged late and they emerged with a vengeance. Those things eat rose and citrus roots, too, so it’s also possible that the damned grubs are simply eating the roses out from their base.

As the weather has cooled a little, though (it’s 9:40 a.m. and I’m still on the deck! and the AC hasn’t come on!!!), a few tiny springs of new growth have appeared. That’s hopeful. I guess.

So I dosed them both with Meyer’s rose care, a systemic insecticide and mildew protection. If the problem is the accursed borers, maybe that stuff will at least upset their buggy little stomachs. If it’s some kind of disease, sometimes Meyer’s will beat it back. And if it’s neglect (as seems most likely), fertilizing and deep watering the things should perk them up.

Speaking of bugs, the place is freaking overrun with ants! This ant city, which apparently has been a-building under an orange tree all summer, unnoticed, is among the largest anthills I’ve ever seen. 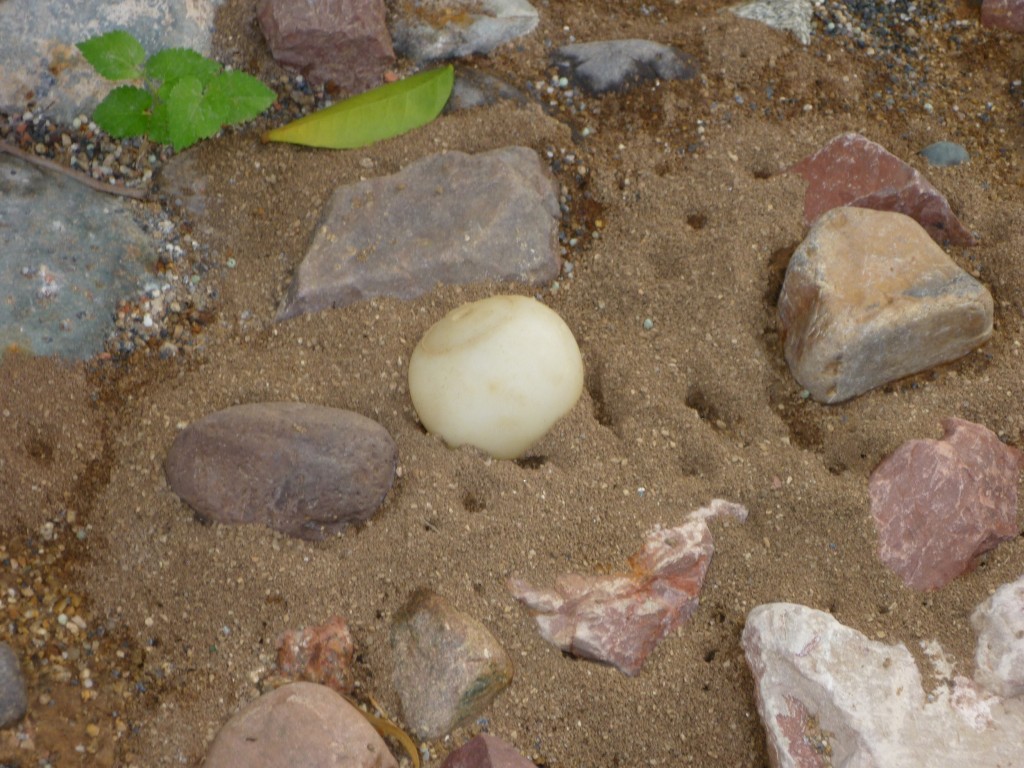 It goes on and on. That white thing in the middle is one of Ruby’s toys, which she evidently dropped there and dares not try to rescue. As soon as the little ladies feel your footsteps on the ground, they come swarming out in a collective fury.

They’re near the back gate, so every time I take the trash out, I get all bit up.

I laid down three different varieties of ant bait (ants will favor one type or another, depending on what the hive’s nutritional needs are at any given time), but so far they don’t seem very interested.

Next strategy: put up the bird feeder and call in a few species that eat ants. Fortunately, we have quite a few of those. If you bring them into your yard, they’ll eventually help to bring an ant problem under control.

Choir season begins this evening, lhudly sing huzzah! I for one will surely welcome something to take my mind off the endlessly time-sucking, often frustrating bidness enterprise.

I think, too, I should plan to do a little gardening or some such every morning (at least until it gets too cold). The daily mile-long doggy walk is really not enough exercise, and it doesn’t do much to relieve stress and frustration. Just the little bit of yard-puttering over the past few days has helped to reduce the general crankiness.

Speaking of frustrating time-sucks, yesterday I was HORRIFIED to discover that all of those images I purchased for the Fire-Rider covers were not cover images. In fact, following Ken’s instructions, Gary had tricked them all out as thumbnails.

I’d thought they were cover images and that Amazon’s software was reducing them to create its thumbnails.

Oh, no. Other way around: It’s been stretching them to build covers.

Probably very, very pixelated covers. But I don’t know. The Kindle I have is an antiquated piece of junk that shows only  black & white. I’m viewing Amazon’s e-books on my iPad. Normally when I buy an e-book, it appears on both the ugly Kindle and the iPad. But this one, goddamn it, does NOT. I can only see it on the Kindle. No idea why.

The image actually looks OK on the Kindle, in b/w. It’s not especially pixelated. I’m told the newest HD versions, whatever they’re called, do require higher resolution images, and so I’m told I need to get Gary to create ALL NEW IMAGES (just imagine what that’s going to cost!!!!!!!) and re-upload the fuckers to Amazon.

If I can figure out how, which so far I have not succeeded at doing.

Twelve of the damn things have been posted at Amazon! I was supposed to have posted another yesterday. So now we’re waiting on Gary’s images for those to go up.

Posting books on Kindle is a time-consuming process. Nothing as tedious as registering an ISBN, but still: time-suck.

Meanwhile, in order to publish Fire-Rider series to Smashwords, I have to register ALL NEW ISBNs for the entire 18-volume series. Yes. For every new format, you have to get a different ISBN. Smashwords does not do .mobi — everything you post there has to be in ePub, or else you have to go through the tortures of the damned trying to run your .doc file through what they cutely call their “meat-grinder.”

Ken (Your eBook Builder) is going to convert them all to ePub and post to SW. But to do that, he’ll need EIGHTEEN new ISBNs. That represents hours of filling out page after page after page of ditzy, tedious forms. Last night I sat in front of Netflix and watched an episode of Bones and two or three of Law & Order: SVU to create some distracting noise while trudging through this chore. By the time I could no longer hold my head up, a total of nine new ISBNs were registered. I’d started, though, with three: so that’s how long it takes to register just six of the damn things.

Today I’m going to launch the CONTEST to name the Camptown Ladies.

Aunt Tilly feels the girls should have a nom de guerre…she’s not real thrilled about any association with the House that might develop. And she has nixed their plan to call themselves “Madison” and “Ashley.” She is, after all, a businesswoman, and she does not approve of Ashley Madison’s business model. “Indiscreet,” “ridiculous,” and “laughable” are some of the kinder critiques she’s shared. “The Internet!” she snorts. “If you’re going to have a fling,” says she, “for heaven’s sake go to a reputable house. If you want the world to know what you’re up to, we’ll be happy to give you a megaphone, show you to the roof, and let  you shout your conquests to the world.”