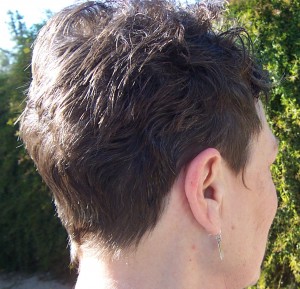 LOL! Once, within living memory, it looked like this! Don’t even ASK what it costs to maintain this style…

So before choir starts, along about the end of August, I’ve got to get the hair trimmed. My long-time stylist, the ineffable and much-beloved Shane, charges $80 for the privilege. And that is marvelously incompatible with the present Anchorite Budget.

Turns out there are several beauty schools in town where you can get your hair coifed for a very modest price. Appears to be in the range of $10 or so. One of them is right up the street, amazingly enough!

About $260 is left to live on until the end of the month — and we’re only at the 13th of said month. Just about every regular bill is paid, including the exorbitant power and water bills. Today I’ll pick up about $20 worth of items from Costco, but those also are, in effect, already “paid for”: their cost will be covered by the $80 remaining on the CC cash card I bought two weeks ago, leaving a $60 remainder on that card.

Gasoline is similarly already “paid for” with a dedicated Costco cash card. I’ve only used about half a tank of gasoline so far — which I paid for with a credit card before the “cash card envelope” scheme came to mind, so there’s a good chance I’ll only use about $30 of the $60 I put on the Costco gasoline card. In fact that’s just another Costco cash card, so in a pinch some of the “gas” budget could be used on food or other necessaries from Costco. But truth to tell, I don’t see that happening.

In theory, I probably could afford to pay Shane eighty bucks to trim the magnificent locks. But that presumes no emergency or extraordinary costs arise between now and the end of the month.

Drive out to Scottsdale and spend an hour socializing with Shane, and you know what’ll happen?

• The car’s battery will die. Oh, heck, no: it’ll probably explode.
• The toilet will plug intractably.
• All five electric fans in the house will quit running at once.
• The dog will eat a dead bird and develop ptomaine poisoning.
• Gerardo will figure out where the leak is in the irrigation system and rack up a $350 bill to fix it.
• The microwave will short out and fill the house with smoke.
• The dishwasher will grind to a halt and flood the kitchen with hot soapy water.

All of those will happen. Trust me: I know. And peals of divine and angelic laughter will be heard echoing down from someplace behind the Pearly Gates.

God and Her Angels have a twisted sense of humor.

The last time my hair was this long — about halfway down to my waist — I was much younger and could trim it myself. In those days, we had mirrors that would allow me to see the backside of my bod’, which made it possible to manipulate hair and scissors by myself. And I could reach the backside of the bod’. That is not so much the case in my dotage.

Used to cut it in three or four layers, progressively longer from the inside to the outer, surface layer. This would make it tend to curve under, in a kind of natural page-boy. But it was shorter then. At its present length, layering it would be redundant. Besides, I wear it up most of the time. At this point, all I really want is to get the split ends trimmed off, so as to make it easier to comb.

I’ve never had my hair done at one of those beauty schools, mostly because I don’t trust some budding stylist not to screw it up. Professionals have screwed it up so many times, why would I trust a kid? And of course, because I’ve had Shane. For many, many years. But at this point the hair is so long that even if she cut off two inches in the course of dorking it up, I could run back to Shane and have him fix it.

In that case, I’d have to pay $90 instead of $80 for the privilege of getting rid of the split ends. And he’d probably cut off an ear, too… 😉

It’s just not that hard to do a blunt cut.

But then….a lot of things are not that hard. And look what happens with them…

Long hair on an elderly woman is an eccentric luxury. Most older women wear their hair short: first, because that is what is expected; second (I imagine), because it’s easier to dye or bleach “blonde”; and third, because they (incorrectly) imagine it’s easier to care for.

• I never do what is expected. My philosophy of life is keep ’em confused!

• I do not apply any chemicals other than shampoo and conditioner (and water) to my hair.

• And long hair is ridiculously easy to deal with. Very short hair is also easy to care for, except that it has to be trimmed every six or eight weeks, which amounts to a gigantic and expensive PITA.

My mother hated her hair. She used to permanent it and dye it and even sometimes cover it with wigs. Turns out that was amazingly…weird.

When she was dying  (as in “RIP,” not as in “don’t it make my gray hair brown?”) — a process that took some long, grim months — she was in so much pain she couldn’t sit up long enough to have her hair cut. She certainly couldn’t ride in the car to the salon, and she couldn’t have sat in a chair long enough, either, even if my father had thought of hiring a stylist to come to the house to cut it. Which of course he did not. So over that time, her hair grew out to about shoulder length.

And in the nursing home where we finally had to take her when my father could no longer cope, the staffers would occasionally coo to me, “Oh, her hair is so beautiful!” They marveled at its wavy heft.

As it develops, once it grew out her hair was almost exactly like mine, except for the color. She had thick, naturally wavy hair.

It was a dull mousey color by this time — she was 64. Starting some years before, it had gone to mostly gray, no doubt because of her excessive smoking. And heredity, I imagine. Her mother was blonde until she got scarlet fever in her twenties, which caused all her hair to fall out; it grew back in very dark. Her grandmother and aunt were natural platinum blondes whose hair went straight to white without pausing at gray. I always believed she damaged it with the hair dye and especially with the harsh permanent solutions. It was pretty frizzy until it grew out…and turned into a faded version of mine.

Like my father, in my old age I’m only just beginning to go gray. My father, who was largely Native American, had black hair. Well. He called it “brown” by way of passing for white, but you and I would call it “black. ” It stayed dark until he was 80 years old. In his late 70s his hair was just slightly graying at the temples. After he had his heart attack, at the age of 80, he did get a lot more gray. But…at 80, I don’t suppose you’d need a heart attack to achieve gray hair.

My hair is chestnut brown with red and blonde highlights — still, after all these years! Now it has a few silver highlights, too.

So if those women thought my mother’s faded mouse-brown hair was “beautiful,” mine must be pretty awesome, eh? 😀