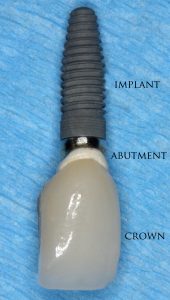 This is amazing. Today I dropped by the endodontist’s office — the terrifyingly named Dr. Axx — to get the stitches removed after the extraction, a couple weeks ago, of a busted molar.

It was already feeling a lot better — magically, no more electric jolts of pain from biting down on threatening foods such as ripe watermelon — so I suspected the best. The sutures, though, resemble nylon fishing line: stiff, poking, and naggingly uncomfortable.

Incredibly, he didn’t even have to shoot up the gums with pain-killer. He just grabbed a tool, went pluck, pluck, pluck, and got rid of the things painlessly within a few seconds. I remarked that if I’d known it was THAT easy I could’ve yanked them out myself with a pair of tweezers, causing the poor man to shudder in horror. 😀

At any rate, the late tooth must have been hurting in a low-grade, more or less unnoticeable way ever since I cracked it on an unpitted olive that lurked in a friend’s spectacularly delicious tamales. Actually, I bit down twice on olives in those tamales…so amazing are they (the tamales) that busting a tooth is not a reason to quit eating them. Haven’t been chewing much on that side of the mouth ever since then…which is, in a word, annoying. But it wasn’t so painful that it bothered me, unless I bit down on something.

Well, the difference in before and after with that tooth out is amazing. Even though I never noticed chronic pain, in the absence of the tooth I certainly do notice the absence of discomfort. Sort of like a distant, hardly noticeable ringer or buzzer suddenly turning off after you’ve trained yourself to block it out of your consciousness: you mark it by its silence.

And the change, when the noise stops, is startling.

Now we have to wait five months for the bolt he screwed into the jawbone to set in. Then he’ll add a fake tooth to the thing, and voilà! I’ll be able to pass for human again.