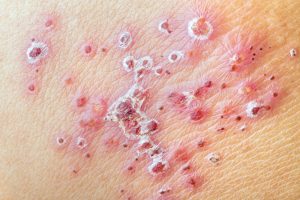 AFTER treatment of skin with Herpes Zoster (Shingles)

So when I went to get the first of the two required Shingles (make that “$hingles”) shots, Safeway’s pharmacy dinged me $160. Shee-ut! That was in spite of what I believe to be pretty damn good Part D coverage. I was led to believe it would cover both of the two required shots.

Comes the time to trudge back in for the second shingles shot: they gouge me ANOTHER $160!!!!!

Like…hey, dear GSK Global (Glaxo Smith Kline)…you couldn’t make a zillion bucks by charging five bucks apiece for every baby boomer who needs and wants this shot you’re manufacturing? Noooooo…you  had to get greedy. And by greedy, we mean fuckin’ greedy.

Over $300 to get shots that are supposed to be covered by Medicare D. Why, I asked Dear Pharmacist. She said “that’s Humana’s deductible.”

When I got home, I called Humana and asked why their Part D coverage didn’t cover the shingles vaccine, especially given the savings to Medicare and to the society in general if shingles could be eliminated or at least much attenuated in the Baby Boom generation.

“Because,” their representative said frankly, “there’s so much demand for it.”

Yeah. Because everybody over 65 is responding to advertising and PR campaigns and because no one who has ever seen anyone with shingles wants to get it, they feel justified in gouging.

And that’s exactly what they’re doing.

Turns out $160 is an average — maybe even a fairly modest — ding for a single one of these goddamn shots. Consumer Reports explains: the bastards have managed to get Shingrix, an ordinary vaccination, deemed a “prescription drug,” and therefore not covered as an ordinary vaccination. Therefore: eligible to qualify as a gouge, of which GSK takes every advantage. Scroll down in the comments section of this post, you find some people have paid as much as a thousand bucks to get both members of a couple vaccinated!

If you doubt that Big Pharma is corrupt and greedy…well, let’s be frank: you’re a damn fool.